SOME FLAVOUR TEXT FOR MY NECROMUNDA GANG 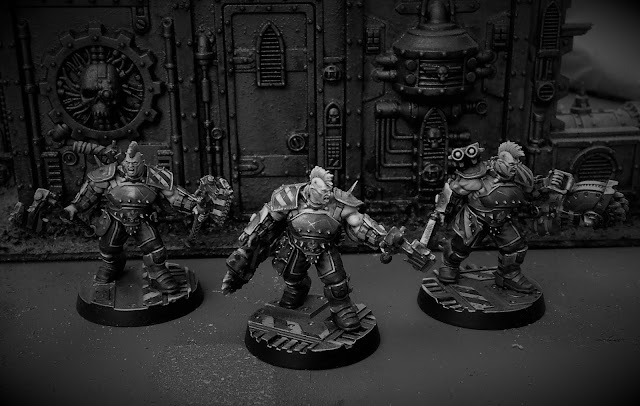 Into the darkest depths of the Underhive come the Rust Belt Overlords, titans of House Goliath and rulers of Gallow's Deep.


Gallow's Deep
Helmawr's Chasm, The Pit, The Drop - Ventilation Shaft Alpha-1138 has a dozen different names, all dependent on House and history as much as where the hiver stands within the gaping hole. It is the meeting point for a hundred thousand smaller ventilation pipes and heat extractors, an immense junction that has evolved into one of the largest heat run-off shafts of Hive Primus. It extends from the surface of the Hive Proper to the deepest levels of the Underhive, so large it can be seen from the air as a deep wound in the side of the Hive. The crevices and hollows along the inside are inhabited, like the wall of some deep-sea trench.

Those closest to the surface live and work as any law-abiding members of the Hive - maintaining the nest of pipes and ductways that run into the shaft, or travelling to nearby factorums. The further down you go, the harsher and more desperate life becomes. There people eke out some form of life surviving off the scraps that fall from above, utilising the heat and meagre light that runs through the shaft to grow what food they can, and working to assist those who would use it as a quick means to descend into the Underhive. They do not help those who wish to climb out.

Like a festering wound riven with maggots, the Deep bustles with activity. Maintenance teams working around and within the shaft observe people of all Houses and all walks of life taking the risky drop down as a quick route into the Underhive, while traders bring their goods down to the lower levels where prying eyes cannot reach, bypassing legal complications and checkpoints by dropping directly into the lower levels in bizarre crawling contraptions, or aerial skimmers of incredible value. From below, the light of the sky above attracts all manner of underground dwellers, curious or hungry, desperate to escape or eager to trade. The Chasm is an access point to the Underhive, brutally steep and requiring specialist gear to traverse, but crucially, ignored by the authorities for reasons of their own.
As with any settlement or realm beyond the light of the Imperium, there are those who would use their own strength to dominate and control. Gangs and other, more monstrous creatures fight constantly throughout the Deep. For decades the majority of the lower levels lay under the brutal control of House Cawdor, and some believe this is where it took its name - under their direction dozens of "sinners" were hanged over the edges of the pit, thrown to dangle as a warning of the wages of sin.

Others believe that the name came from millennia past, when the Hive was barely a city. What would become Gallow's Deep was used as a place of execution, and as the city grew ever upwards the gallows were kept in use. The bodies of criminals and heretics were left hanging over this great drop before being unceremoniously dropped - some obscure fashion of the time or idiosyncratic wish of the Governor. In time the executions would be relocated, the open space repurposed into an immense junction to help regulate the temperature of the Hive, but the name endured. Those inclined to superstition speak ill of the bottom of the pit; millennia of executions have forever tainted the ground below them. Others mock this and say the stench of death is just the reek of the Sump carrying up with the run-off heat.
The Rust Belt
Gallow's Deep was constructed over millennia, growing up with the Hive around it. Like the stratified layers of an ice core, the ages of the city are visible on the inside of the shaft; different materials used, fashions of the time indicated by decoration and architecture. The various "ring-levels" can also be marked by differences in weathering and degradation across ten thousand years. One of the most obviously visible layers is the Rust Belt.

Ring-levels 43-45, deep below the surface of the Hive, were built millennia past from less than ideal materials. Impure irons have suffered from exposure to the toxic atmosphere of Necromunda, leaving the metal skin oxidised, rusted and stained. Looking down the length of the Deep, one can see the ring-levels as an orange blemish running around the circumference of the shaft. Dubbed the Rust Belt, it is one of the lawless levels beyond the reach of the Palatine Enforcers, and the home of the Rust Belt Overlords.

The Rust Belt sits at the border between the Underhive and the city itself, and is marked as the point where traders and travelers should stop their descent. Below the Belt lies the broken, twisted horror of the Underhive; collapsed spars and wreckage impassable for any aerial vehicles. Below that, the sickly filth of the Sump, gurgling and bubbling, spewing foulness upwards. Slathering, eyeless beasts crawl forth toward the heat and light of the Chasm, while greed and desperation drives many to attack the riches of the Belt - those who rule there can never sleep without an eye open and a gun close to hand.

Overlords
The gang known as the Rust Belt Overlords (or 'Belters) have ruled the ring-levels for several years now, long enough to reckoned as a permanent fixture of the Deep by its blighted denizens. Their territory extends outward from the ring in a haphazard sprawl, dictated by the broken tunnels and collapsed domes that surround it, but the Belt has always been their true source of power.

The Deep itself is hellish, exposed to the toxic atmosphere of the planet, scoured by wind and stifling with the heat that rises up through it. Nonetheless, for those willing to brave the volatile conditions it is one of the fastest routes up or down the length of the Hive and a prime route for all manner of legitimate and illegitimate trade. The Rust Belt sits at the mouth of the Underhive, and the 'Belters that control it tithe all manner of travel and commerce that passes through.

The heat is nothing compared to the furnaces of their House, and their position is well defended from all sides. Attack from the surrounding territories must penetrate a warren of tunnels and half-collapsed ducts, where the brutal power of the 'Belters becomes evident at close range, while those who try to use the Well itself must contend with both the incredible heat and the metre-thick armour plating, shuttered access points and reinforced bulkheads - slick with condensation and defended by a host of enraged gangers.

Their is no fixed point of command for the Rust Belt - the gangers know to move constantly around the ring so as not to present a static target. They have the numbers to man the various checkpoints and access ways throughout, and the firepower to shoot from one side of the Chasm to the other should the need arise.

Like many of House Goliath, the 'Belters favour brutal weaponry and unsubtle tactics. Stubguns and Stub Cannons are a preferred gun of choice, the sheer concussive force of this weapon good for forcing enemies back over the edges of the Pit. In honour of their surroundings, their armour is pitted and rusted, while their hair is styled into orange mohawks. There is a predilection for combat drugs and stimulants to a disturbing degree, and their leader has recruited many members that other gangs might consider somewhat unstable.

The membership of the gang tends to be split between the rational and the "mad dogs," crazed enforcers of the Overlords armed with vicious melee weapons and pumped with horrific cocktails of combat drugs. So long as the more cogent keep control, business continues as usual, but there have always been "incidents."

Their current leader is Loghar Khotari, who rules the Belt through fear and sheer brute strength, as is the Goliath way. He is supported by a network of lieutenants and the aforementioned "mad dog" enforcers, but is not shy from delving into the tunnels himself and blocking a corridor with his own stimm-enhanced bulk. He achieved his role through violent challenge, and no doubt will lose it the same way, but for now he is the undisputed tyrant of the Rust Belt Overlords.

Given the success and strength of the 'Belters, splinter-groups are often sent out into the Underhive beyond, expanding the reach of Loghar and House Goliath. Not all have returned in triumph, or returned at all, but some have gone on to success and furthered the reputation of Overlords across the city. When word reached the Rust Belt of new territories revealed by the Hive Quake, Loghar unleashed a handful of his trusted gangers under the command of the savage Zayas brothers, each a violent killer infamous for their pit-fighting prowess.

They would bring the power of the Rust Belt Overlords to the depths of the Underhive, in the search of the mythical Hab-Dome 111...