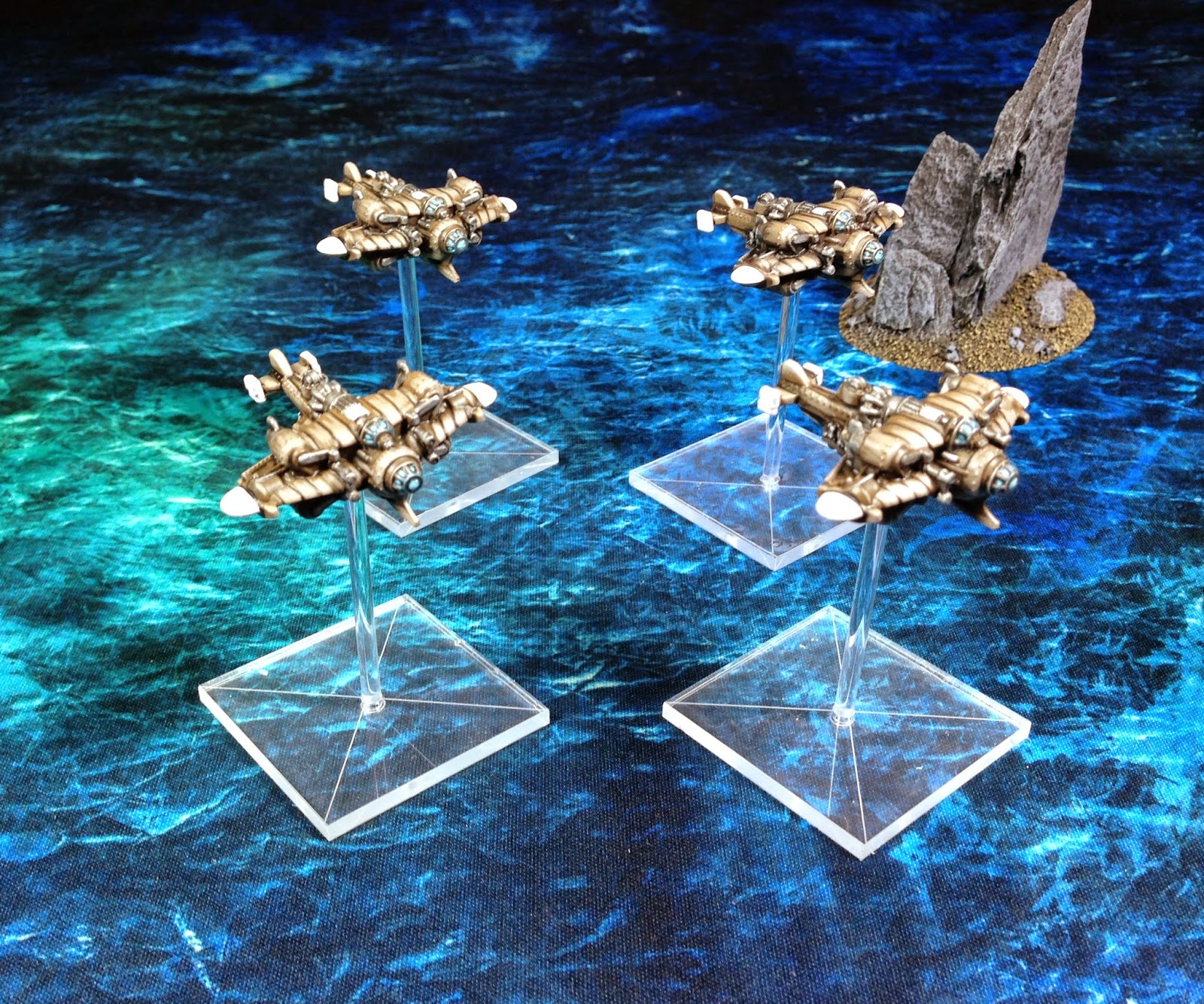 Welcome to another Battle Report from Full Spectrum Dominance, and a welcome return for my old opponent Good Friend Ben. This week, Ben has decided to use the same fleet I ran in the last Battle Report (they do belong to him after all), comprised of the Honourable Eclipse Company and the Federated States of America. To face them I have put together a collaboration of Black Wolf Mercenaries and the Chinese Federation - perhaps not the best anti-air ships available, but I had not used the Black Company for a long time and wanted to roll out the Devastating Ordnance!

Featuring 1,500pts per side, the board was set up with lots of small rocky outcrops - nothing too big to give an impression of more open water than usual. A small convoy of merchant ships was positioned on one side of the board, acting purely as terrain, while three platforms were placed on the other side. 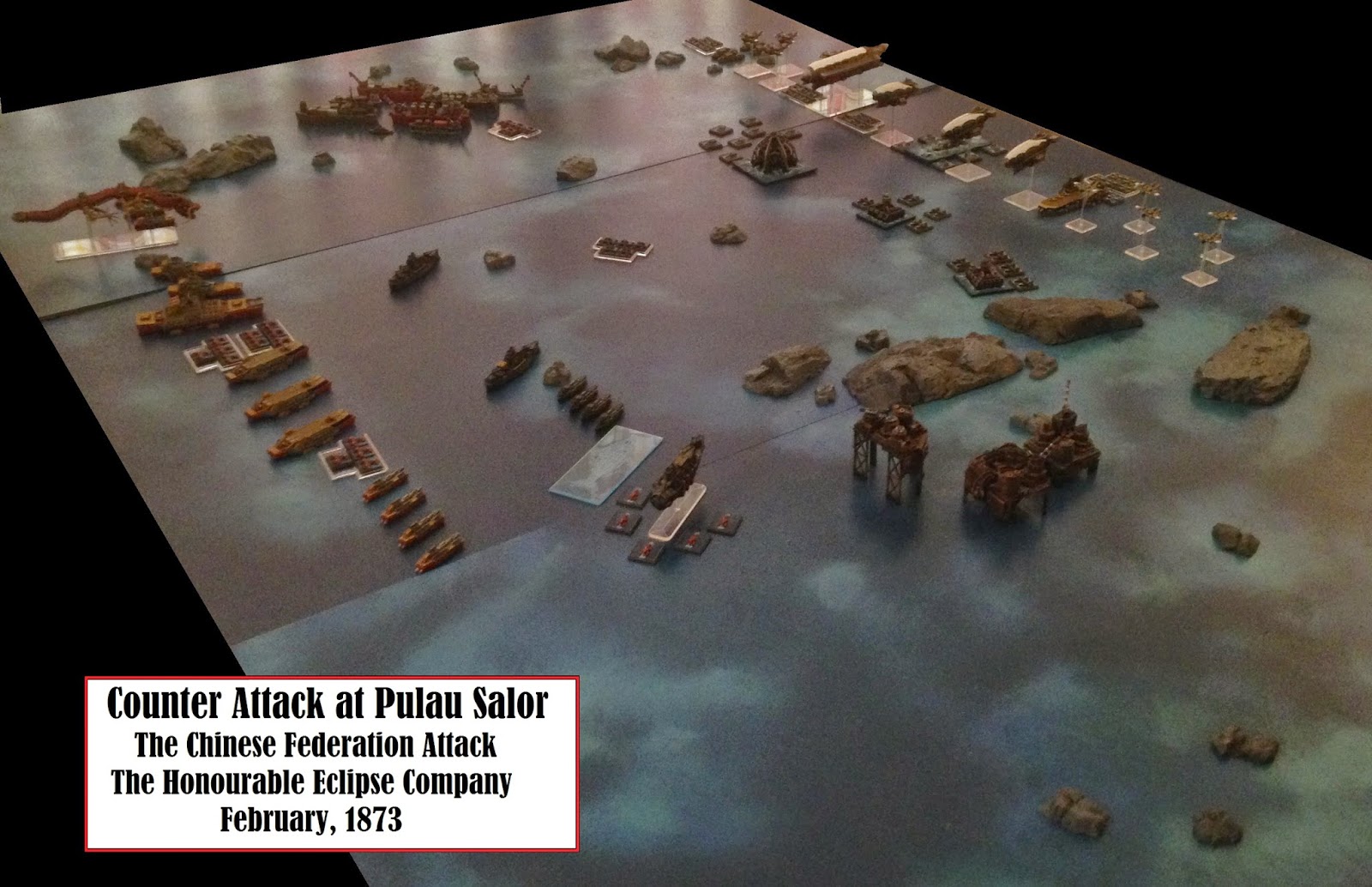 
Allies
The Federated States of America

My Fleet
The Chinese Federation

One Jian-class Battleship with Rocket Batteries

One Wing of Fighter Planes

One Squadron of four Fury-class Frigates 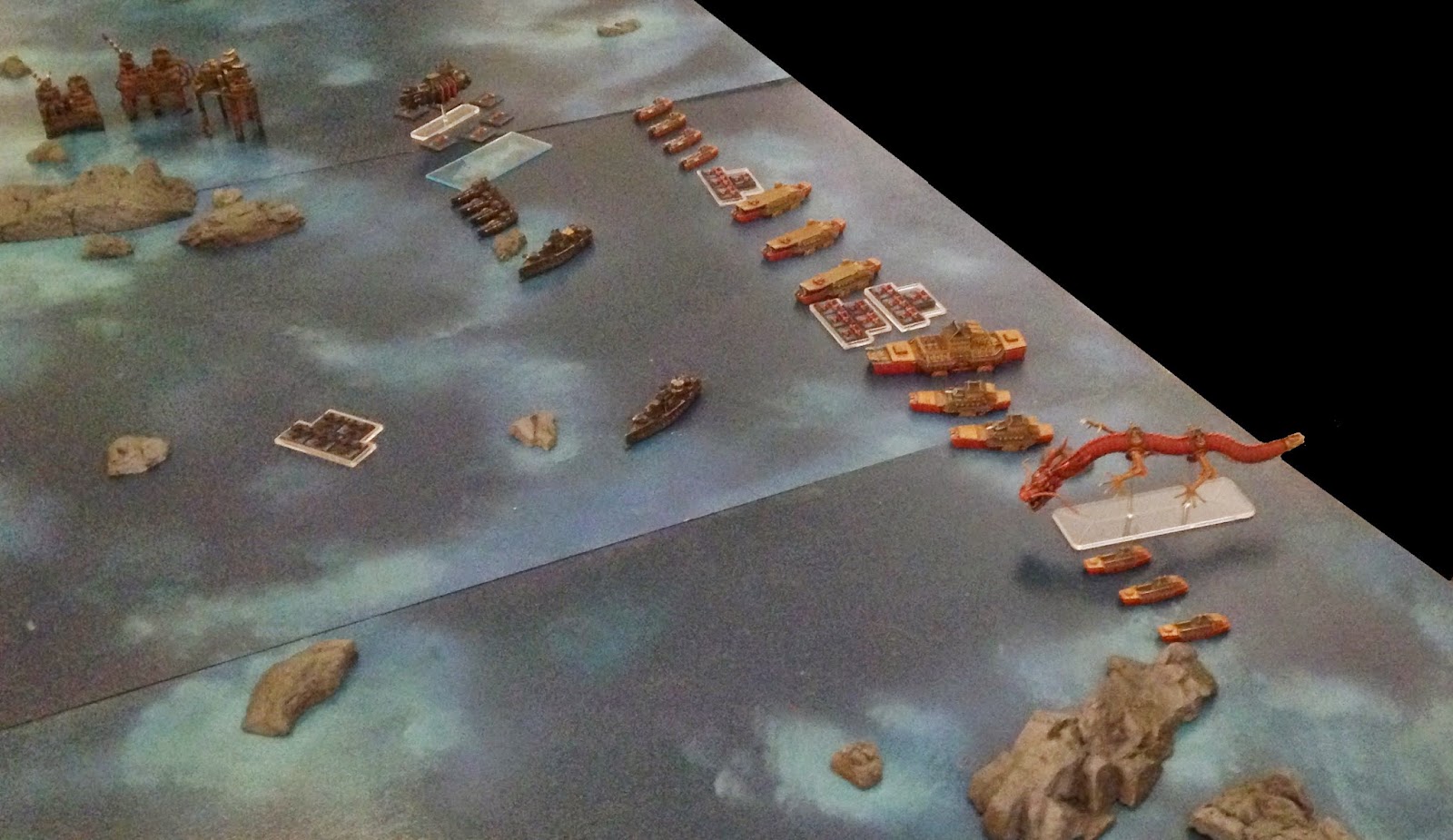 
AFTERMATH
At the end of the second turn, Ben had scored a total of 815 Victory Points and succeeded in his Secret Objective. The Chinese Federation and their mercenary allies had only scored 780 Victory Points and not completed their Objective, leaving the result was a Victory for the Honourable Eclipse Company! A brief but bloody affair.

CONCLUSIONS AND LEARNING POINTS
The Eclipse Company prove their worth once more! I should have learned Mike's lesson from last week and brought some flyers. As it was, Ben's excellent Swift Manoeuvre rolls left his fleet out of sight and difficult to hit, and when my Chinese fleet entered the fray properly, it was too late and Ben had already scored his Objective.

Advanced Deployment with the Black Company was a mistake! I thought it would be good to get some early shots in, but then I remembered Ben would deploy everything in the clouds or under water, and the two Battle Cruisers suffered for it. The Manticore and the Deathbringer were fine, though the torpedoes were wasted. Losing the mercenaries so quickly lost me the game, as they were worth a LOT of points, and though the Chinese Federation were largely unscathed, they had not yet managed to impact the game in any real manner.

Small tokens everywhere! The Assault Submarines and Attack Craft caused a lot of damage in this game, and should not be underestimated! They make the decidedly lacklustre fortifications totally worth it for the Eclipse Company.

The Chinese ships that had managed to get into good positions did well - the Gunships and the Battleship in particular. The Destroyers did well when they had the opportunity to fire, and lit up Ben's fortifications. I was particularly impressed with the Battleship, even if I had to use my Commodore ability early in order to save the Deathbringer from being Prized. Had the game gone on another turn and I not used that ability, the mass Boarding actions across the board would have spelled doom for a large number of the Eclipse Company airships!

I ignored the signs that Ben was targeting my Small squadrons, and marched them to their doom - losing the game in the process. Whoops!

Well done once more to Ben. The Honourable Eclipse Company are a force to be reckoned with when used correctly, and with some gun-toting allies like the FSA or Indian Raj we think they become even better. In the future I will need to playtest them against a rival Aerial fleet - perhaps the new Aerial Support Group for the Black Wolf Mercenaries when it is released!

THE NARRATIVE
"Their fleet smashed in the encounter at Pulau Salor, the Black Company ended their contract the Chinese Federation and disappeared into the South China Sea, deeply angered by the losses they had been forced to suffer at the hands of the callous Chinese fleet commanders. A rogue element let loose into the broiling maelstrom, the future actions of these fell mercenaries would no doubt impact the future of the campaign. But who would draw the advantage?"