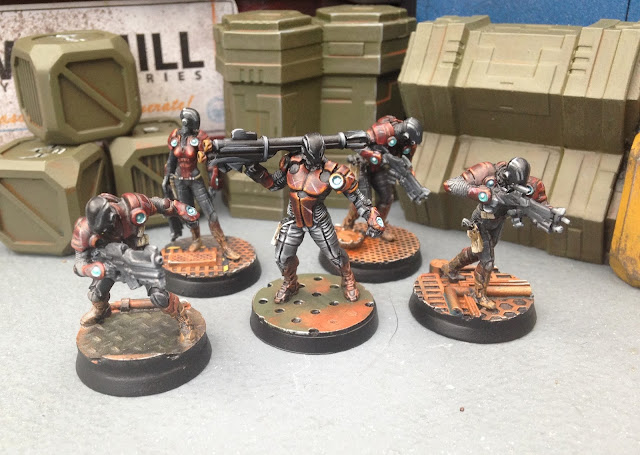 The third round of the Escalation League is a simple 200pt Annihilation mission, but with two Classified Objectives per player, and the introduction of some slightly more complicated rules such as Hacking, Command Tokens and High Value Targets. This is game changer, as no longer can you rely on just gunning down your opponent to complete your mission and get all ten Objective Points. The nature of the Classified Objectives is also random - you can't plan for anything so need to take a variety of Specialists. Difficult!

200pts is definitely not my comfort zone, as I always feel I am missing out on either big guns or Specialists. Achieving a full Order Pool is also difficult, so something always gets sacrificed. In this case, for my practise game at least, it was my Wildcat Link Team.


PRACTISE GAME
Round Three was arranged against Chris, the top local player with his dastardly Tohaa. They had been performing really well, and had beaten me in a recent tournament, so I was not exactly thrilled with the draw. I knew I would have to face him at some point, however - so I guess it was good to get it out of the way early. Chris was on holiday during the first week of Round Three, so I went through a 200pt practise game with another local player, Karl.

Karl had beaten me twice in previous tournaments with a vicious Shock Army of Acontecimento, but he was now running the Morat Aggression Force - big brutish aliens with big guns. I had good experience against Morats in the past, but only in higher points games where I could afford the firepower needed to shoot them down.

His force featured a full Link Team of Vanguards with an HMG and Paramedic, Kurgat Engineer, Sogarat with HMG (a giant, heavily armoured multi-wound monster) and Kornak Gazarot, Superior Warrior-Officer. An impressive force at such a points value! The Sogarat took the high ground, defended below by the Kurgat, while the Link Team lurked in a building with Kornak.

The game began haltingly, as the Intruder fired through the cover of smoke at the Sogarat, but ended up wasting four Orders to only cause one wound. The Reaktion Zond then gunned down the Kurgat. In turn, the Morats went nuts, the Link Team finding a good angle to bring down my Intruder and Tsyklon Zond with their HMG before the Sogarat destroyed the Reaktion Zond.

My firebase crippled, I threw the Jaguar forward to try and bring down some of the Vanguard with his Chain Rifle. He was taken down, but in concert with the Tomcat managed to remove three of them. The Tomcat was unceremoniously obliterated by the Sogarat, and I learned a lesson in brutality as the rest of the team was hunted down and murdered in short order. The game ended there, and with neither of us achieving any Classified Objectives, the score was 8 -1 LOSS. Ouch.

This game opened my eyes to how many points could be earned without the Classified Objectives, so I adjusted my team with the next, official game of Round Three in mind.


THIRD ROUND GAME
Featuring a modified team with more guns, I was hopeful this game would go slightly better. I was wrong.

Chris brought a strong selection of Tohaa units, featuring one Triad led by a Sakiel with Spitfire, a Makaul and a Kamael Forward Observer, a second Triad led by a Sakiel with Viral Combi-rifle, a Makaul and a Kumotail Bioengineer, a Nikoul Ambush Unit, Diplomatic Delegate, hidden Clipsos Infiltrator and one of the new Kaeltar Specialists with two Symbiobombs - these would give the two Sakiels some additional punch. Chris took the better side for deployment and I chose to go first.

I screwed things up immediately, with the Wildcat with Heavy Rocket Launcher fluffing his rolls and dying to the Nikoul Ambush Unit, and then the Hellcat misjudging a distance and following suit - this damn sniper would now be almost impossible to root out! The rest of the turn went equally badly, as the Stempler Zond tried his luck and was destroyed, while the remaining Wildcats tried to move forward into cover.

Launching his attack, Chris' Ambush Unit killed two more Wildcats before the Triad led by the Sakiel with Spitfire advanced. He used a Symbiobomb to kill the Alguacil Hacker, and then it was my second turn. The Lunokhod sped forward and unleashed a Heavy Shotgun at close range, stripping the Symbiont Armour from the Sakiel with Spitfire. The rest of the turn was wasted, as the Tohaa managed to dodge any further shooting and I was running out of Orders!

Chris finished things off by revealing his Clipsos Infiltrator to destroy the Lunokhod and shoot down the Cray Koalas, His two Triads advanced on my surviving models, hunkered down in a small building, and though they managed to kill the other Sakiel and render a Makaul Unconscious, they were all shot to bits and the Makaul revived. The last man standing, my Wildcat Lieutenant, was taken out by another Symbiobomb as he tried to hide behind a wall. Slaughter!

Absolutely brutal! I was wiped out and only managed to cause one casualty! A resounding 10 - 0 LOSS, and my position near the top of the League was lost. Chris played excellently as usual, his Triads are efficient with their Orders and his positioning of the Clipsos and Nikoul really crippled my chances - especially when the Wildcat and Hellcat were killed in my opening moves. I rolled high for almost everything - good for armour rolls, but not for hitting with my guns! This seems to happen a lot against Chris...

The Nomads leapt straight in action, with fire from the Intruder driving the Bolts into cover as the Hellcat appeared on the flank and gunned down both the Peacemaker and the Bulleteer. The Wildcats advanced to assume a good covering position with the Hacker, while the Hellcat covered them with Suppressive Fire.

His Link Team was trapped in a large building and his two Remotes were destroyed, but the NeoTerrans managed to drive back the Hellcat and take down one of the Wildcats with the Deva Functionary. The Hexa revealed herself, but was shot down by the Intruder, who then gunned down one of the Bolts as they made a break from their cover. The Bolt Paramedic managed to revive him, but it was time for the Nomads to go on the offensive once more.

The Hellcat reappeared and shot the Deva Functionary with Spitfire apart, and the Tomcat appeared to flush the Bolts out of their cover. Sacrificing himself, he flooded the room they were stationed in with fire, and was followed by a lone Wildcat who poured more flame into the room. The Bolts were scattered and three of their number dead. The Hellcat followed the suicidal charges of his comrades to  attack the rest,

The game ended quickly, as the NeoTerrans had been blind-sided by the Aerial Deployment troopers and were unable to escape the building, which was surrounded by Alguaciles and Wildcats and covered by an Intruder Sniper. The Nomad team had managed to score a good number of Victory Points, and also achieve their Classified Objectives, while Rob had managed to preserve three of his men and score a Classified Objective - final score, 10 - 4 VICTORY. Finally a good win after two weeks of being murdered!

The list was stronger, while Rob made some mistakes with his deployment that my Hellcat was able to take advantage of. It was nice to not be killed by AROs after the previous couple of games, I can tell you. This win brought me back up to the upper echelons of the League, but I would need a very good result to get first place!

Distracted by Dystopian Wars, Work™ and a brief family holiday, my painting progress has been relatively light. I have finally finished the modified Clockmaker, which after three iterations and various tinkering has ended up looking like this:

Converted from a spare Jaguar with the head of a Wildcat and arms from a Tomcat and an Interventor, I modelled his pose as something close to the Haqqislam Hassassin Barid, one of my favourite Hassassin models. He looks like he is in the middle of assessing the damage to a TAG or Remote, trying furiously to get it back in the fight mid-firefight.

I also painted a second Jaguar, this time armed with two close combat weapons. A lovely model, I enjoyed painting the tattoos and the blades especially. Unfortunately there was an issue with the varnish and the final finish is not to my satisfaction - as well as causing the model to be very bright for the photos! I may come back and get better pictures when my lighting situation improves, hopefully this will sort it out.

So there we are! Some distinctly mediocre performances on the battlefield have left me feeling rather unsure of my gaming with the Jurisdictional Command of Corregidor, but hopefully with higher points games there will be the chance to redeem myself. In the mean time, the painting continues, with a return to the terrain collection on the horizon as another Tournament approaches (next weekend!).