"The attack upon Bremerhaven was launched at the beginning of summer, as the waters of the bitter North Sea began to warm and the Russian fleets held in the ice of the Kara and Berents Sea could begin to head south. The Petrushka was with them, and none could stand before its wrath as the incredible power of the Sturginium-powered Bombard was unleashed upon the defences of the port.

The Curtain Wall - first line of defence for Bremerhaven but weak in the face of concentrated Russian bombardment - was sundered in mere hours. The attack continued, driving great rents in the structure that would allow an entire fleet to sail through and into range of the city itself.

The Prussian retaliation was swift - even as the Bombardment Group prepared to withdraw to allow the next wave of Russian ships to attack, their interceptors leapt upon them. Leading elements of the 76th Iron Fleet, lead by the rugged SMS Kronprinz and the belligerent SMS Hetzer II would catch them before the walls.

Whether they had the firepower to deal with the Petrushka was another question entirely..."
- The Hunt for the Markgraf (cont.)
Naval Battles of 1874 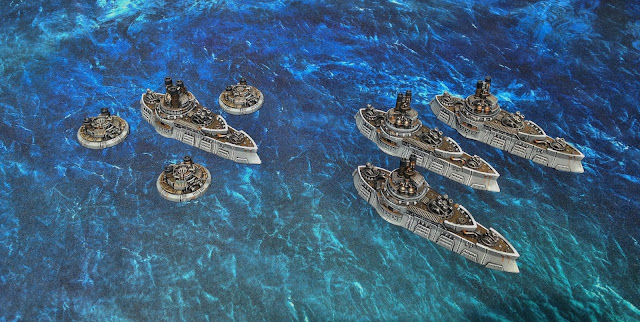 Welcome to another Battle Report from Full Spectrum Dominance, and one of the final games of the Hunt for the Markgraf campaign. Things hot up as the Russian Coalition begin their attack on the port of Bremerhaven, using their powerful mortars to bring down the outer Curtain Wall. The Prussians have dispatched a fleet to intercept them, but will it be enough? Can their massed gunnery match the immense power of the Svarog-class Dreadnought-Robot?
THE SCENARIO

This week we chose something fairly standard - the standard Free to Engage Fleet Orders for both sides. This would mean the first to achieve 1,050 Victory Points would be the winner. The only major difference in this game would be the terrain - the broken Curtain Wall of Bremerhaven would divide the board, and the fleets would play down the board length-ways.

THE FLEETS
The Russian Coalition

This list was based around the Strike Flotilla with the addition of Shaska Squadron and the Petrushka to really carry forward the theme of bombardment. I wanted to make their intention to shatter the Curtain Wall quite clear! The Tiksi-class Support Cruisers were there because I had painted them recently more than anything. The Kazimov-class Corvettes made up the numbers and would threaten anything that came too close, while Rogatina Squadron brought the usual impressive firepower - lead with these two while the rest moved up in support and bombarded the Prussians out of the water!

Overall it was not a usual tournament-winning force, but themed nicely and I hoped it would work to bring down some defences. I had big hopes for the Petrushka and the new squadron of Tiksi-class Support Cruisers, but was not sure about the Nikel-class Heavy Frigates.

Mike's fleet was chosen with gunnery and boarding in mind - the massive batteries of the Hussar-class Gunships and the Kaiser Karl-class Heavy Battleship caused me a lot of consternation, while the Boarding Torpedo in the form of the Emperor-class Battleship and the Wachter-class Escorts could attack and win in any combat. This was a nasty fleet, notably lacking in Tesla-weaponry but making up for it in other ways. He chose gunnery as he knew in advance I would be running the Petrushka, and wanted some serious firepower to bring it down!

We both found it somewhat amusing that we had not chosen any proper Support Aircraft, and the Fighter Planes would be spending the game chasing each other around.


TURN THREE
The Prussian fleet is smashed, but their spirited defence means the Russian Coalition cannot secure their victory just yet!

TURN FIVE
At the end of Turn Four, the Prussian Empire were in a ragged state, and had officially lost the game (in fact, they might have lost at the end of Turn Three, but we did not count these points). Playing on, however, the Prussians (well, the Kaiser Karl-class Heavy Battleship) had caused untold chaos and clawed back a huge number of Victory Points - actually giving them the advantage!

At the end of five turns, the Prussian Empire scored 1,382 Victory Points while the Russian Coalition had scored 1,250 Victory Points. The difference in points was not enough to turn the tide, and I deemed it a DRAW.

DREADNOUGHT-ROBOT WATCH - What did it achieve today?

Overall, not bad! Not game-breaking by any stretch - looking at the equivalence it probably destroyed around 390 Victory Points worth of Prussian vessels. Keeping it withdrawn from the battle was a good choice - it does not need to close with the Istomin Bombard Cannon, and it was only the speed of the Prussian vessels (and their nasty Close Gunnery) that caught it. The double-tap bombardment of the Hussar-class Gunships was a nasty move, but one I enjoyed a great deal!

The rest of the Russian fleet performed pretty well - I was very happy with the Nikel-class Heavy Frigates, which was a bit of a surprise, and the Khatanga proved its worth shooting in all direction and bringing down multiple targets. I was extremely unlucky not to cause more damage with the boarding action against the Kronprinz - you'd think ten Reckless crew would be able to score more than one hit! As it was, this failure allowed the vessel to run rampant through my fleet and cause several hundred points worth of damage.

The Tiksi-class Support Cruisers were unlucky not to add more to the game - their early damage and stifled Line-of-Sight with the Uhlan-class Cruisers blocking them made it difficult for me to get them shooting properly.

The Specialist Squadrons were fine, though they did not really get a chance to make a big impact on the game. Once the lead vessels of the squadrons were lost, their attendant Escorts and Frigates still played a big role, so it was not the end of the world.

On the Prussian side, Mike's decision to play cautiously with the Gunships and Destroyers was a good choice, as even though his "boarding-centric" force of Corvettes, Cruisers and Battleship with Escorts were lost, the Gunships were able to move in once I had committed. Had it not been for the Petrushka, I am sure the Prussian fleet would have pulled off a nice flanking attack on the Russians.

Vessel of the match must go to the Kaiser Karl-class Heavy Battleship Kronprinz - what a monster! Surviving waves of Russian boarding parties and laughing off every major ordnance attack, this beast accounted for almost all of the kills of the Prussian fleet - no mean feat when they scored so many Victory Points!

The incredible defensive statistics of the Kaiser Karl-class Heavy Battleship really came out today - the Rugged Construction, high CR and the Shield Generator meant I was really suffering. Only the lucky Generator strike from the Mimic'd Tesla Generator on the Petrushka opened it up, but by then it was too late.

So there we are! Finally, a victory (of sorts) for the Russian Coalition, and a battering for the Prussian Empire. We shall see how things go in the next meeting, as things get decidedly more violent...

THE NARRATIVE
"...the outer Curtain Wall has been breached, and a significant portion of the defence force lost with the destruction of the 76th Iron Fleet. Bremerhaven had never faced such a dire situation - there would be no escape for the vessels moored at the port-city - only violent engagement with the immense White Banner Northern Fleet.

Baron Karl-Ehrhart Grunner was not disheartened - the Russians had played their hand, revealed their greatest assets and suffered significant losses bringing down the Curtain Wall. The Markgraf would ride out soon enough, and the Russians smashed on the shores of Bremerhaven..."