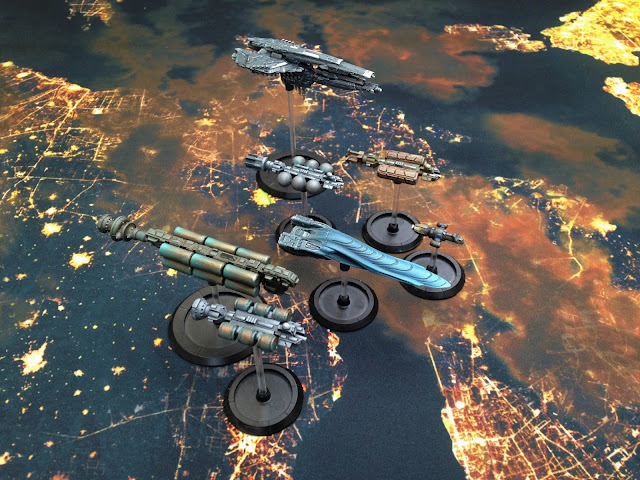 Roughly one year ago I took part in the Dropzone Commander tournament at Reading Warfare, which was a good laugh and my first two-day Dropzone tournament. The weekend was not just a tournament but a bit of a shopping trip - a huge number of different companies, shops, stalls and stands were present shilling their wares. At the time I was still waiting for my Dropfleet Kickstarter pledge, and wanted something space-based to paint while I waited.

These merchant vessels from Full Thrust by Ground Zero Games caught me eye - a close-enough scale for Dropfleet and a good variety. I picked up a handful for a very nice price... and the following week my Dropfleet Kickstarter pledge arrived. The merchants would end up waiting.

And so they have sat in their box for almost a year, waiting patiently for their turn. The UCM have dominated my painting schedule, but now they are almost complete and I have turned my brush to something a little more colourful. I kept the colours subdued but tried to get away from the solid grey that has dominated the UCM fleet, and found a little wash to weathering and verdigris has really given them something special. I realise that space ships would (hopefully!) not suffer too much from weathering and rust, but I wanted a used-future feel, and it also provides a great cover for mistakes with the paintjob or casting.

Followers of the blog will know that I constructed a sizable force of Merchants and Civilian Vessels for Dystopian Wars, and now I can do the same thing in Dropfleet Commander! They might not have any official rules at the moment, but I am sure I can work something out for them, or simply use them as terrain.

All of these models are from the Full Thrust range, aside from the Princess-class Luxury Liner, which most Dropfleet Commander players will recognise from the Kickstarter. A small number were converted with pieces from the Space Station set, giving them some nice engines to add to the variety and make them look extra special.