TIDBITS ON THE FUTURE OF DROPFLEET AND DROPZONE COMMANDER 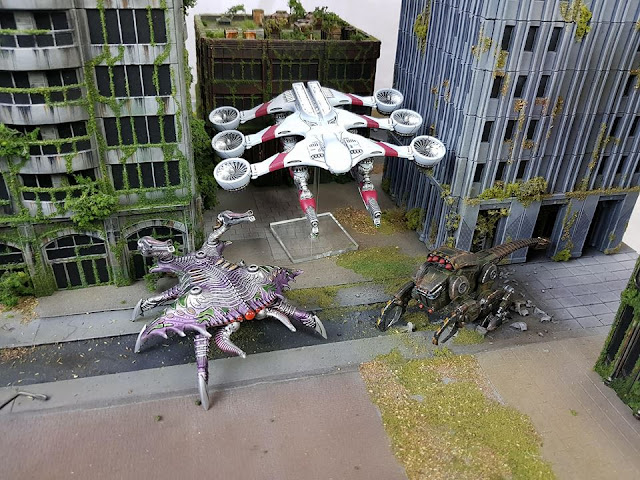 It's been a fair while since the takeover of Hawk Wargames by TTCombat, and though we've had lots of good news on the Kickstarter front and the usual showstopper of Christmas, actual news on the future of the systems has been light on the ground.

Luckily, better people than I have been pestering TTCombat for tidbits, and come back with something vaguely tangible. Big thanks to these brave data-miners - Emily Kindlysides and Michel Goulmy on Facebook has been the most vocal voices and deserve credit for keeping my faith in TTCombat tiding over for a little while longer.

I'm going to repost it here, and must repeat that this is not my information! Nonetheless I'm sure they would be happy that it gets out to as many people as possible.

When will DZC and DFC be available on the webstore?
We’ve pencilled in the relaunch of the whole range of DZC and DFC on the TTCombat webstore for the end of this month.

What's the plan for US distribution?
We’re good to go pretty much whenever you are! Existing distributors from Hawk are still on board, so we’re just waiting for the orders. You know a store you’d like to see DZC and DFC in? Tell them! Tell them over and over until they have no choice. We’re working with more US distributors, but the process takes a while to sort out a good deal for both us and them. The more demand from retailers, the quicker the process will go!

How will you be addressing the issues with international support?
International (like Australia) is a bit harder than Europe and the USA, as those are the two biggest markets, and so are easiest to cater for! We’re looking to expand into the rest of the world soon too, it’s just a case of being able to find the right distributors and keep up with the demand! If you know of stores that want to stock our products, get them to email sales@kingsleydistribution.co.uk who deal with all of our retail orders.

Will TTC be providing regular updates on DzC and DFC? If so, through what channels?
Regular updates are a must! New miniatures and rules coming thick and fast once all the dust has settled. We’ll be updating our webstore, and providing information through there and here on Facebook! We’re planning on making a brand new website for Dropzone and Dropfleet that will have information, articles, background, rules, event information... lots of stuff!

How will we revitalize and/or grow the player base?
In our opinion there are two important things to:

1. Get the games into more retail stores. The more available the games are, the more people will pick them up. We work with a lot of retailers at the moment, but if you have a retailer you want to stock the games: tell them you want them. Then when they do stock them, buy stuff and offer to run events and demos!

2. Having the games in stores is well and good, but without new releases, no one will keep playing. We all know there’s been a lack of new releases over the last year, and that’s because Dave has been busy doing other stuff. Now he’s back on design, we’ll have more releases coming! Getting new releases out to the stores isn’t a quick process though, especially when taking over a new company. So please be patient with us! We’ll have lots of new stuff releasing frequently, which will really help keep people interested.

When will we receive information about the Talon program?
We’re looking to relaunch that this year. It’s very important to the game, and we’d like to make sure we’re doing it right. We’d been working on a similar scheme for RUMBLESLAM for a little while, and it seems sensible to combine everything into one place with a similar operating procedure. That doesn’t mean you’ll have to promote RUMBLESLAM or Carnevale if you just want to do DZC and/or DFC, but if you like more than one game you’ll be able to run events for all of our games and be supported through one channel (and use your points on all our ranges!).

Will TTC be at Gencon (or other shows) with DZC/DFC?
Yep, we’ll be at Gen Con and others in the States through Don, and will be flying the flag at UK Games Expo, Salute, and Crisis to name a few!

Will TTC be following up on Hawk's aborted plans to encourage organized play/tournaments?
We’d love to! We’ve got a lot to get sorted before jumping into organised play events and tournaments, but it’s something we’re currently doing for RUMBLESLAM, and something we’re writing the Carnevale rules to incorporate from the start. That idea will definitely carry over to DZC and DFC! Organised play is one of those things that’s hugely important to the hobby, and there’s nothing quite like getting a room full of excited gamers together! In all honesty though, running tournaments isn’t our priority right now – getting the miniatures made and out to stores is. All of that stuff will be a lot easier to keep running once the initial start up is done, and we’ll be able to shift our attention to more fun things like tournaments.

Is DZC V2 still on target for an April release?
Potentially, but we think we’d actually like to push it back a bit. We’re talking about the best way to get the new rules out, and aren’t quite decided yet. V2 rules are almost entirely written and tested, but there was never a plan in place to add anything else to the V2 release. We started our discussions off talking about whether Reconquest would be needed, and in the state we saw the new rules, you’d still need those books to play the complete factions. We’re not so keen on having to have multiple books to play a game, and it seems a little weird to back the new rules backwards compatible with older units, when this is an opportunity to consolidate everything that’s happened with the game up to this point, and also make a few tweaks while we’re at it. Of course, this version of V2 requires a lot more work, but would potentially see new miniatures, new story, new art, photos, and painted minis instead of just a new rule set.

With that in mind, we’re discussing a potential open beta for the new rules, as well as free downloads for all units. None of that is definite right now, but we’re talking about the best way to revitalise the game, and we’re not sure a quick release new rulebook is necessarily the answer.
Are the updated rules going to feel more streamlined than they currently are?
We think so!

Is there any way we can get rid of the D6 in DZC V2 and maybe introduce the D10?
We’re actually going to change it to a D2. Coinflip Commander is here!

When will we see DZC Reconquest Phase 2 units? Can we have a preview?
We’re hoping they’ll be available with the webstore launch. As for a preview, yeah why not?

Will there be a huge selection of 10mm scenery available for more varied game boards?
Yes. Huge selections of affordable scenery is our jam. In fact, Scott wanted to show a quick render of some of the MDF kits he’s been working on.

Will Famous Commanders be balanced for tournament and regular play?
This is a conversation we’ve been having quite a lot recently, and there are differing opinions on it. Personally I think that named characters should be able to be used no matter where you are, but others feel that they should deliberately be very good and not necessarily balanced for tournaments. We’d love to hear the community’s thoughts!

Where is the KS fulfillment?
Around 75% at time of writing.

When will we get our store credit for the undelivered Kickstarter stuff (maps, etc.)?
I’m afraid I can’t give an exact date for that. We’ll be sending them out to backers in waves – there’d be nothing worse than getting thousands of orders all in one week and putting a big delay on fulfilling them! We’re looking at Q1 this year for the first wave.

Will there be a look at internal faction balance in DFC?
Definitely at some point!

Will show exclusive models like the Athens ever be available as Hawk has done in the past?
Yes.

When will we be seeing the "fifth race"?
TODAY! No, not really. I don’t have any specific answers for this one. Is “soon” a good enough answer? New races helps more people get into the game, as the more varied styles you have, the more likely you are to find something you really connect with. So yeah, it’s definitely on the horizon.

Any plans for a Voidgate only pack?
I don’t know! It’s kind of annoying that you need Cruisers to get Voidgates. I’ll ask around to see if there’s a chance to do them in resin. No promises!

What role will new ships (monitors, destroyers, dreadnoughts) play in the mechanics of DFC?
From Dave:

Destroyers - basically they sit between Frigates and Cruisers in size, capability and cost. Generally (but not always), they require Weapons Free to get the most out of them (unlike Light Cruisers and Frigates) but pack very respectable firepower in return.

Dreadnoughts - these are the absolute kings of the battlefield. Monstrous in size, massively armed and extremely hard to kill. A serious investment in points (at tournament level especially). Total bullet magnets with massive signatures - a big commitment but a scary prospect to face.

Lots of vague stuff there, but the important things that stand out for me - Dropzone Commander Second Edition pushed back - makes sense if they want to release a load of new models with the new Edition, which is the best way to do it in my opinion. The release of the Famous Commanders is overdue and look fine, but I'm not hugely excited abut them at this stage.

This coming weekend Adam and myself will be heading to a Dropzone Commander tournament, the first time we'll have played since the last Coastal Assault. Hopefully that will get the blood flowing a little.

On the other hand, the Dropfleet news is exciting - the new ship classes will bring some spice to the game and I still hold out hope that Destroyers will be able to take down Strike Carriers and change the dynamic.

Overall some nice news to hear, but nothing concrete and nothing hugely ground-breaking. Time will tell.