GETTING READY FOR OUR DROPFLEET COMMANDER TOURNAMENT 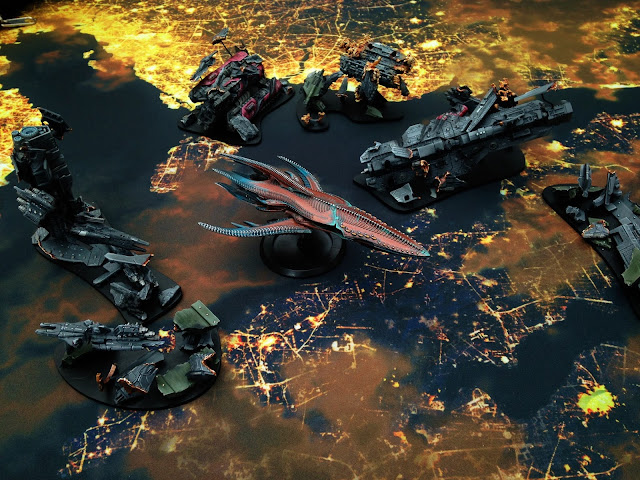 At some point last year, Adam and I were approached by the organiser of Beachhead 2018, the Wargames and Trade Show in Bournemouth, to run a Dropfleet Commander tournament. We had run a small tournament at the local gaming store the year before, Adam had plenty of experience running tournaments (mainly for Flames of War), and we were eager to play some games against as some new people. We quickly agreed!

LOGISTICS
We decided to try something a little different after three tournaments with very similar missions - we would be running Station Assault. The other two missions were tournament staples; Grid Control for a ground-heavy game and Mixed Engagement for a... mixed... style of game with ground and Space Station elements. This would give us a nice mixture of scenarios and Approach types, which would be key for giving every player a challenge.

Up until the very last minute we were busy preparing. Trying to drum up support for the tournament in the weeks leading up to February, we were faced with a community a little deflated from the lack of developments out of TTCombat. Luckily this changed in January, as TTCombat opened their webstore and released the awesome (and controversial) Centurion-class Cruiser - a Limited Edition vessel you may have seen me commenting on recently.

This burst of enthusiasm from TTCombat was perfectly timed to kick us into gear. We had attracted a fair bit of interest in the tournament and sold enough tickets to make for a solid event (not the twenty four players of Midlands Maelstrom, but enough to justify it), and after getting in contact with the TTCombat we had also received a small amount of prize support. Our hosts and sponsors Entoyment (the local gaming store) would also be supplying prizes, and I had made up a handful of trophies for a laugh.

We decided that as a smaller tournament we would concentrate on First, Second and Third places. TTCombat had sent some nice pins as well, so Best in Faction would also be awarded. Lots of prizes!


THE RULES
The basic tournament would be straight out of the Tournament Pack, with no weird special rules. The biggest issue was the debate on whether the Centurion-class Cruiser would be allowed. Given the release of the model would be only one week before the tournament, there was debate on whether some people would have access to it - should we allow proxies? Should only those who have received their models in the post benefit while those without suffer?

What about the rules themselves? Is this vessel balanced enough for a tournament? Adam and I had played Dropzone Commander tournaments in the past with Experimental Rules, and they are a really great way to playtest something quickly, but is that how we wanted things to go? I had visions of horrific UCM and PHR fleets with four each of them, obliterating everything in their path. Adam, by contrast, seemed up for it, and in the end we only had one UCM player planning to run a pair of them.

THE TABLES
Table-wise, we had to gather together five tables' worth of gear. This would include twenty five Space Stations and a very large number of Sectors and Clusters, as well as the five gaming surfaces themselves! Between us I had my illuminated nightside mat, an atmospheric mat I had won at Midlands Maelstrom, one generic snow board which would work well and a sea mat from Dystopian Wars (time for Waterworld to get invaded!). Adam had his desert board for the fifth. The Top Table I had decided would be filled with my 3-D Debris Fields and resin Sectors, as well as actual Space Stations (!!!). The other four boards would be populated with photocopied and laminated pieces. For some reason I elected to do all of this preparation myself.

I no longer have any sympathy for Shaltari players and their dots after cutting out and laminating four tables worth of Clusters and Space Stations.

THE FLEET
Gaming-wise I was still not sure what to use - UCM with a pair of Centurion-class Cruisers? Unpainted Scourge? Casual games against Adam had been run with the Scourge, with some success. I had still not managed to actually win a game, but at least I was not being tabled! The main decision came down to running Centurions, or try to bash out the Scourge fleet in one week.

The struggle to come up with a scheme for the Scourge had been vexing me for some time, but after a free evening I bit the bullet and got them basecoated with a red brass colour. Not too far from my comfort zone, but the UCM were intended to be my true love - these guys needed a fast and efficient scheme that I could run off an assembly line in time for the tournament.

Basecoating the entire fleet in one night and finishing the first test model, I was largely happy with the result, though the colour for the oculus lenses was still up for debate - I figured yellow, red or turquoise blue could work. Perhaps different colours for different squadrons? Turquoise and black for the tips of the fins/tentacle things added a nice amount of colour, while other membranes were filled in with a solid turquoise.

The first squadrons came together incredibly quickly - one Saturday and a few evenings' work had me with three painted Cruisers and all of the Frigates and Corvettes. Nice! The last week loomed, and I was left with the Battlecruiser and a pair of Hydras to finish, plus the trophies for the tournament and any Launch Assets I could manage. Easy stuff!

I also tried to fit a quick practice game in against Adam, who had decided to run Shaltari in an effort to win Best in Faction. It turns out he would be automatically win this prize as he was the only Shaltari player! I would lose the practice game rather horribly, but it wasn't a compete embarrassment. Shaltari are a hard match with their incredible long range.

I love the amount of firepower this fleet brings, but still wanted more - dropping two of the Gargoyle-class Strike Carriers and gaining another Djinn and a Nickar-class Corvette was an option, but I felt this would left me at a distinct disadvantage in terms of Drop. Six Strike Carriers and a Troopship would be fair, but still not an awesome amount. Nonetheless, I was not prepared to lose anything else. Three Djinn-class Frigates was a bit of a dodgy move, but I figured having a Strategy Rating of 3 would give them the advantage against rival "Wolf Pack"-style squadrons and three would still have good firepower. The Wyverns and other heavy hitters could make up for the loss of firepower. I was particularly looking forward to a pair of Hydras, a pair of Wyverns, Djinn and a Basilisk springing their trap at the same time! It would hopefully be an intimidating amount of firepower.