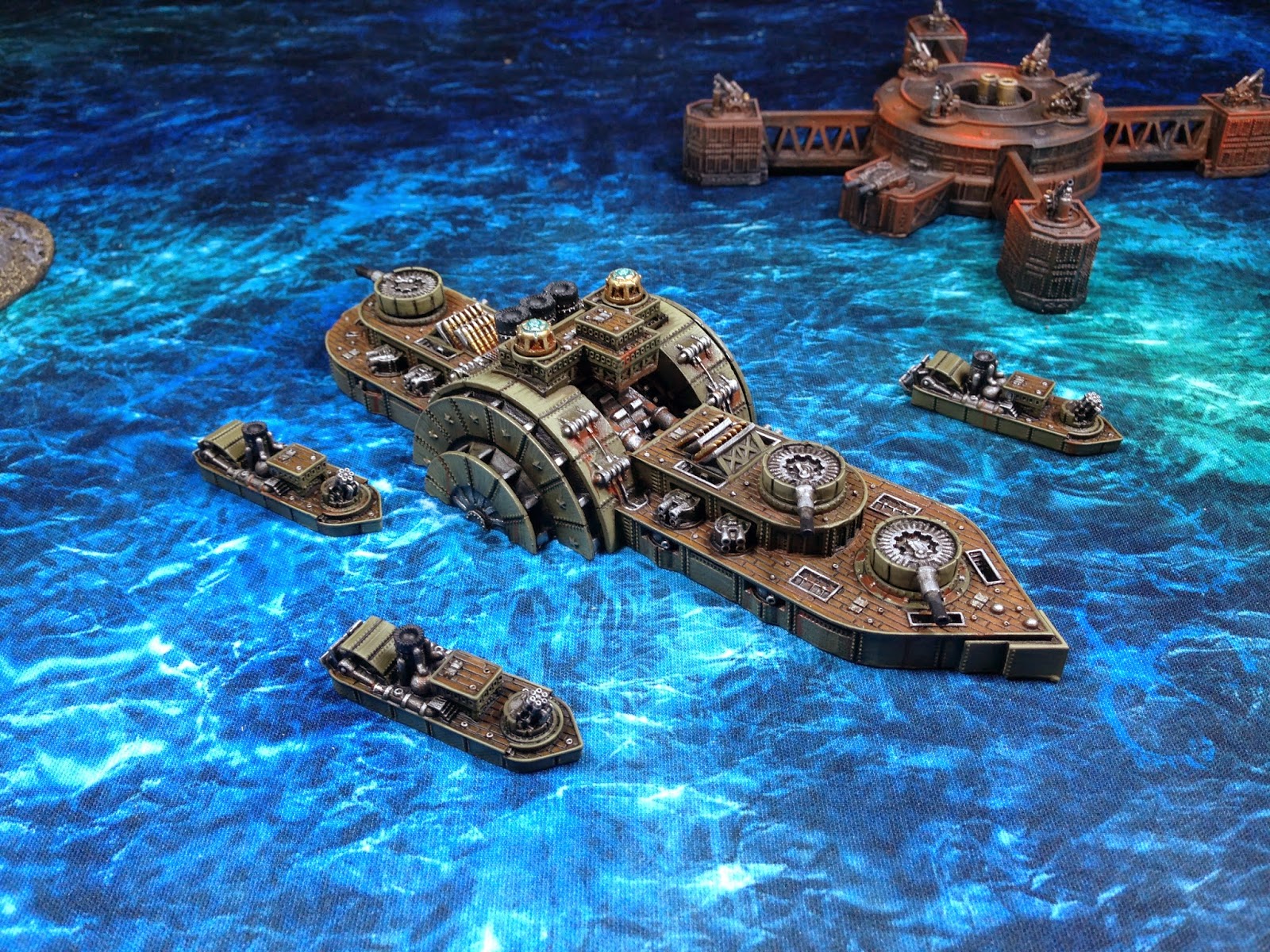 Welcome of the first Battle Report for Full Spectrum Dominance! Taking advice from the guys over at Breakthrough Assault, this report will be mainly pictures. After all, who wants to wade through pages and pages of text... just ignore the small novel of background I've started the report with, I do like my narrative!

This game was played between myself and my Good Friend Ben (lead photographer for the blog and founder of Breakthrough Assault). 1250pts chosen using the normal rules, with the Core Fleet and Percentage restrictions listed in the rulebook. Rolling up our missions after choosing fleets, Ben was tasked with destroying my Core Fleet - Rhine-class Fleet Carrier, the Donnerfaust-class Support Cruiser squadron, and one of the squadrons of Arminius-class Frigates, while in turn I had to capture, damage or destroy 70% of his fleet.

In the narrative, I described this as the Americans wanting to cripple the raiding fleet anchored at Holsteinsborg, while in turn the Prussians simply need to survive and damage the encroaching American force as much as they could.

Turn One saw a lot of hesitant manoeuvring and holding back, with neither commodore willing to commit their ships too early. On the flanks, the matching frigate squadrons caused minimal damage at long range, while in the last activations of the turn, the FSA Dreadnought caused minor damage to the Rhine-class Fleet Carrier and the right-most Reinforced Cruiser Squadron took out two of the Destroyers. In return, the limited firepower of the Prussian fleet damaged the the Gunships in both FSA Cruiser Squadrons. The Prussian fleet steamed ahead quickly, while the FSA were more cautious, relying on their rockets and long-range gunnery.

Turn Two saw things heat up immeasurably. In the early activations, both fleet's small squadrons practically wiped each other out, leaving only a few damaged stragglers, while the entry of the Metzgers into the game saw the destruction of the Reinforced Cruiser Squadron on the left flank. On the right, the Donnerfaust-class Support Cruisers destroyed the other Lexington-class Cruisers and left the last Gunship on only two HP, but had brought themselves into range of the Dreadnought and Sky Fortress. In the ensuing shooting phase, the central Donnerfaust suffered a Magazine Explosion and blew a rather large gap in the centre of the board!

The Prussian fleet seemed to have pulled two powerful moves in destroying the Reinforced Cruiser Squadrons and the majority of the Frigate squadrons, but the FSA counter-attack had left the Prussians reeling. All this, and the Lee-class Scoutships had not even descended yet!

Turn Three saw the loss of the Sturmbringer to an overwhelming Boarding Assault by the Scoutship Squadron and the ensuing maelstrom between the derricks as the Prussian fleet attempted to deal with them - destroying one, rendering another Derelict and Prizing a third. The fourth escapes, and with it, those precious few Victory Points needed for a Prussian victory. In turn, the last, crippled Donnerfaust desperately attempts to survive and carry with it the FSA victory, somehow surviving the Dreadnought's fusillade!

ENDGAME
With the end of Turn Three, we called it the end of the game and added up the Victory Points and Objectives. Ben scored an impressive 885pts, just over the 70% margin, but crucially he had failed to destroy the Prussian Core Fleet - the last Donnerfaust was badly bruised but still alive. In return, I had only scored 850pts - not the 875pts needed to achieved my objective.

We both reasoned that had the game continued, the last Donnerfaust would be dead, and I had enough firepower left to cripple or capture the last Lee, leaving us both having scored our objectives but with the same result - a draw. (We both make a point of resolving the VP's at the end of turn rather than on an activation by activation basis - not strictly the rules in the book but the "new" rules recommended by Spartan games designers and playtesters and something that will no doubt make it into 2nd Edition)

With Ben having achieved 70% however, it was resolved as a Draw in the FSA favour.

CONCLUSIONS AND LEARNING POINTS
Great game! Another bloodbath for the forces of the Prussian Empire and the Federated States. It became incredibly tight around the central sea fort, with multiple ships threatening to smash into one another and manoeuvring space running out very quickly, leading to the final turn's intense Boarding actions.

My games with Ben are always close; we know each others fleets very well and the power of certain units. I feel a Draw is perhaps a disservice to the Americans in this game when they would have won by scoring 70% Victory Points, but the Field Objectives are a good leveller and bring something fresh to the "Pitched Battle" scenario.

Next time, the Lee-class Scoutships need to be dealt with quicker! By Turn Three they were close enough to bomb my Robots and board my Submarine undamaged, and it was all too late for me to stop them. Time to invest in some Interceptors... or actually field some Fighters instead of just Dive Bombers! Maybe some of those fancy Danish TFTs, with More Machine Guns will help?

Unit of the game? I'm tempted to say the Metzgers, taking out an entire Reinforced Cruiser Squadron in one turn, and later helping deal with the Lee Squadron, albeit too late. The Saxony-class Corvettes were also fantastic, destroying an entire Frigate Squadron and later Prizing a Scoutship for some last minute Victory Points.

For Ben, the Scoutships were a game changer, but the Sky Fortress also caused no end of trouble taking out my centre line with those punishing broadsides. The Dreadnought was perhaps not the game-decider it usually is, spending most of the game scoring points on the Rhine and suffering some bad luck with its rockets. Nevertheless, with me almost ignoring it all game there was little chance to score big on the Victory Points.

Dreadnoughts, especially the Enterprise, are a nightmare if you don't have a big ship of your own. Boarding would have been my plan but the small squadrons were dealt with too early in the game, or distracted by easier/nearer targets.

Boarding still wins games, even with this much firepower on the table. The FSA pack a lot of Marines in their ships, even compared to the Prussians, and can play the boarding game just as well.

Next time, we will take more pictures of the board as a whole! Sorry for this being a bit of a confusing mess. First Report = lots learned. Hope you guys could follow it...

THE NARRATIVE
With the supporting fleet smashed, the Argo was forced to withdraw from its assault on Holsteinsborg to regroup at Newfoundland. The ragged Prussian defenders were in no position to pursue, though their breaker crews readied to recover the hulk of the Sturmbringer and clear the Davis Strait of debris.

The intentions of the Federated States had been made clear; piracy by Prussian Empire out of Greenland would no longer be tolerated. In turn, the Prussian and Danish fleets anchored at Holsteinsborg and across Greenland had been granted a reprieve, a chance to ready their defences and strike out before any significant American force could be mustered. Taking charge of the situation, Grunner decreed the next engagement would not be fought in Prussian waters, but on the open sea.