Inspired by the Seydlitz-class Mobile Airfield, the Stiglitz is my answer to the super carriers that have appeared on the Dystopian battlefield. 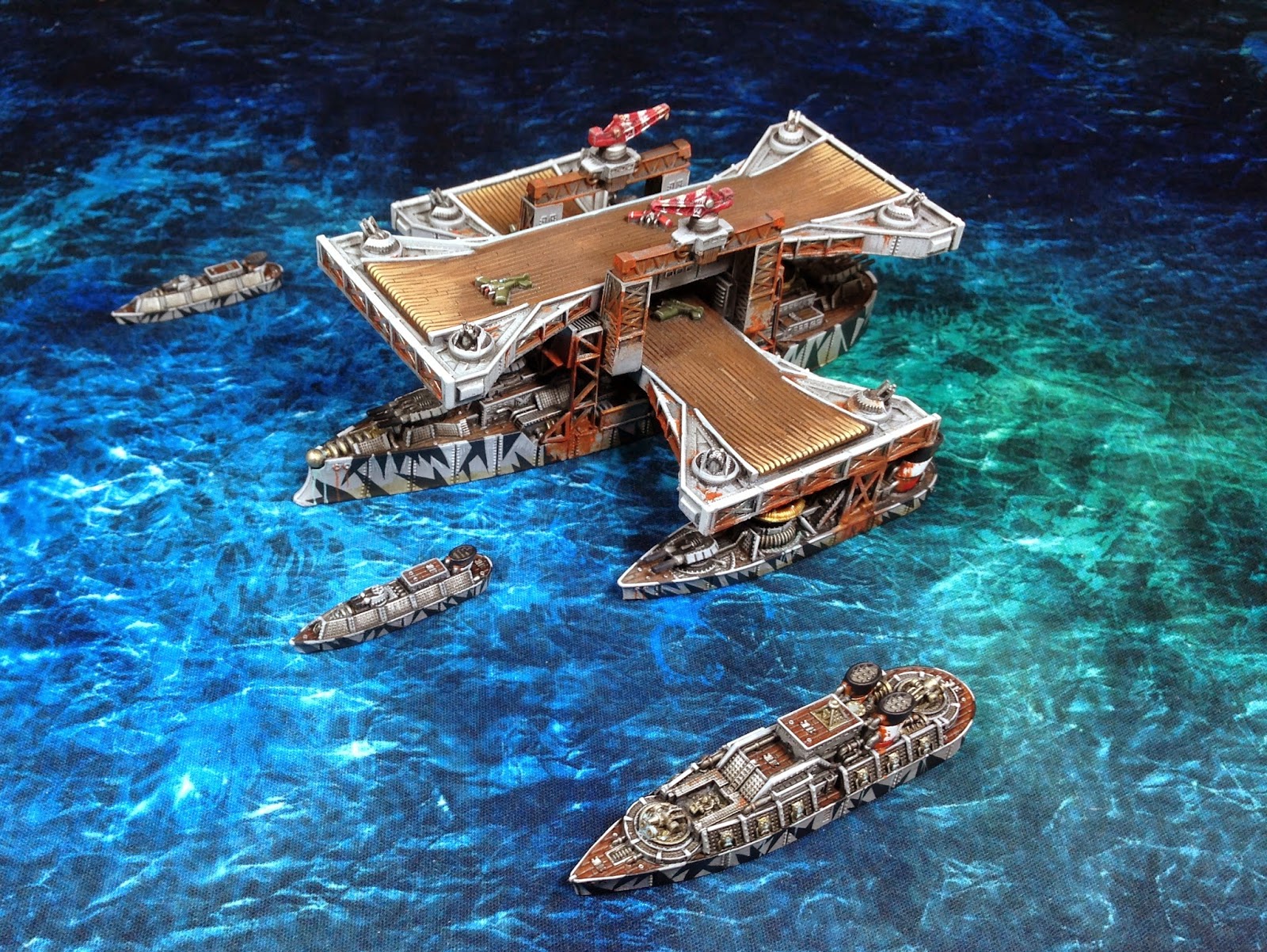 The initial inspiration for the Stiglitz was, obviously, the Seydlitz-class Mobile Airfield. A huge model, with a giant Prussian Cross on top, looked just the right level of ridiculous for me. I was always jealous of the land forces - why do they get this huge centrepiece? After looking through my collection of Prussian ships, I realised I had a pretty big fleet, and as good as the Imperium and the Blucher looked, I needed something more to sit as a focal point. There was nothing more awesome out there than this huge cross-shaped airstrip on tracks... I needed to strap it onto the back of a ship. It was the release of the Italian fleet that spurred me into action, as the three-hull design looked fantastic. The trimaran carrier made me look into getting a Seydlitz and finding something for it to sit on - obviously only the Blucher would do, and a pair of medium cruisers would be needed for support. 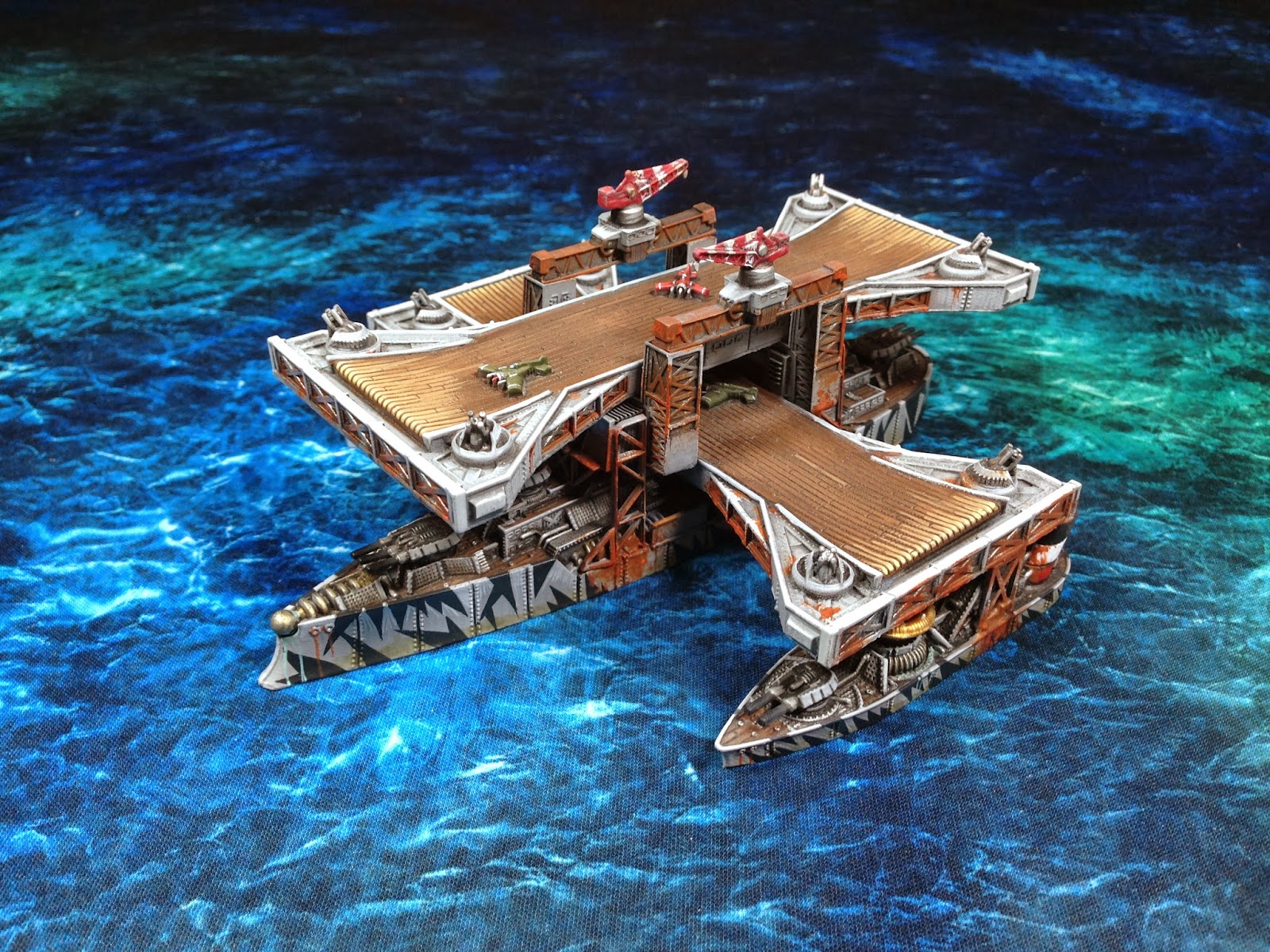 BUILDING THE MONSTER
Running a dry fit with the airstrip, it was obviously going to be huge. Great! Looking at the superstructure of the Dreadnought and where to cut it, the appropriate height would be too high for the Reiver-class Cruiser to support it. The Hussar has a slightly higher structure, so a pair of these were acquired. Usefully, the Hussars also come with smaller, two-barrelled turrets that I figured would be better for the carrier than massive Dreadnought-strength turrets - already at this point, game balance was something to consider.

The superstructure of the Dreadnought was sawn off and filed down with the modelling saw, so that it was roughly the height of the Hussar gunship. I then took away the banks of Tesla-weaponry on the flanks of the ship. The gunships were then glued underneath the ends of the airfield, making special effort to make sure everything was straight and correct. To bulk up the bottom superstructure of the airfield itself on both the central hull and the gunship hulls, I visited a model railway shop and bought a few sets of signals, gates and railways crossings - basically anything with struts and supports that looked useful. These were stuck in any area that looked like it needed it!

Overall, I found the airfield itself needed very little work - given it is designed to sit on top of a giant tracked structure, sitting on top of a giant floating structure is not much of a leap. The majority of work was making the ship look like it could carry the weight. Overall, the maxim kept in mind was that this is not a ship originally designed with this purpose in mind - this was a refit done at sea and at speed, re-purposing three ships of war for a very different objective.

PAINTING
The techniques used to paint the Floating Fortress were not different to the rest of the fleet, just done at a larger scale. The rust was the main indulgence, spread over the struts and supports to cover over some of the... less polished areas of the conversion. The background for the ship as a refit done at sea during campaign excuses this shoddy engineering and maintenance. I felt the rust might overwhelm the colour scheme, especially given how little orange there is on the rest of the fleet, but in the end I think I got away with it.

IN THE GAME
I wanted the Stiglitz to be usable in the game but have not made proper, playtested rules for it yet. Starting with the front-on firepower, the vessel features three Hussar turrets and a triple-barrelled Dreadnought turret, as well as a giant Tesla weapon. A fearsome battery, to be sure! The only other weaponry is the second Dreadnought turret on the aft-mount, and the auxiliary AA guns mounted on the airfield.

Like another super carrier, the Hisar-class Mobile Airfield, I wanted the Stiglitz to have Combat Launch, Fuel Reserves and considered Double Decker. I wanted it to carry a complement of twelve Tiny Flyer Tokens, but with Double Decker this would mean it could carry twenty four tokens, which to me seems... a bit much. I also considered Rugged Construction and Electrical Defences, but didn't want to overwhelm the model with MARs. Rugged Construction will probably stay given the look of the model, instead of giving it higher DR and CR values.

Generator wise, I have modelled several generators over the model, but figure a single Tesla Generator and Shield Generator is okay. The Tesla Generator would be needed to give it some actual movement, while the Shield would help keep it together as, again, I did not want it to have particularly high defensive statistics.

The main strength of the Floating Fortress would be its high TFT complement, pretty good guns and sheer size. I did not want a game breaking murder machine - leave that to the Dreadnoughts. Overall, it's not cheap (250pts), but rugged and survivable, and able to throw out a good bit of firepower and defend itself when attacked. This ship is, like it's namesake, a floating fortress rather than a battleship.

NARRATIVE
It was during Karl-Ehrhart Grunner's North Sea campaign against the Russians that the Stiglitz was born, crafted out of desperation as their passage home was repeatedly blockaded. Refuelling and refitting was becoming an issue; the Prussian fleet needed a way to stay at sea for longer if they were to encircle and destroy Admiral Ushakov. Recovering the hulk of the great Dreadnought Stiglitz in the Norwegian Sea, Grunner had his scientists and engineers use what remained of the grand warship to craft a huge floating airfield that could move with the fleet, carrying a massive reserve of fuel and fighter planes. He dubbed it the Stiglitz-class Floating Fortress, and though he did not transfer his flag to her, the Fortress became the nucleus of his fleet, enabling them to operate at maximum efficiency for far longer than before.