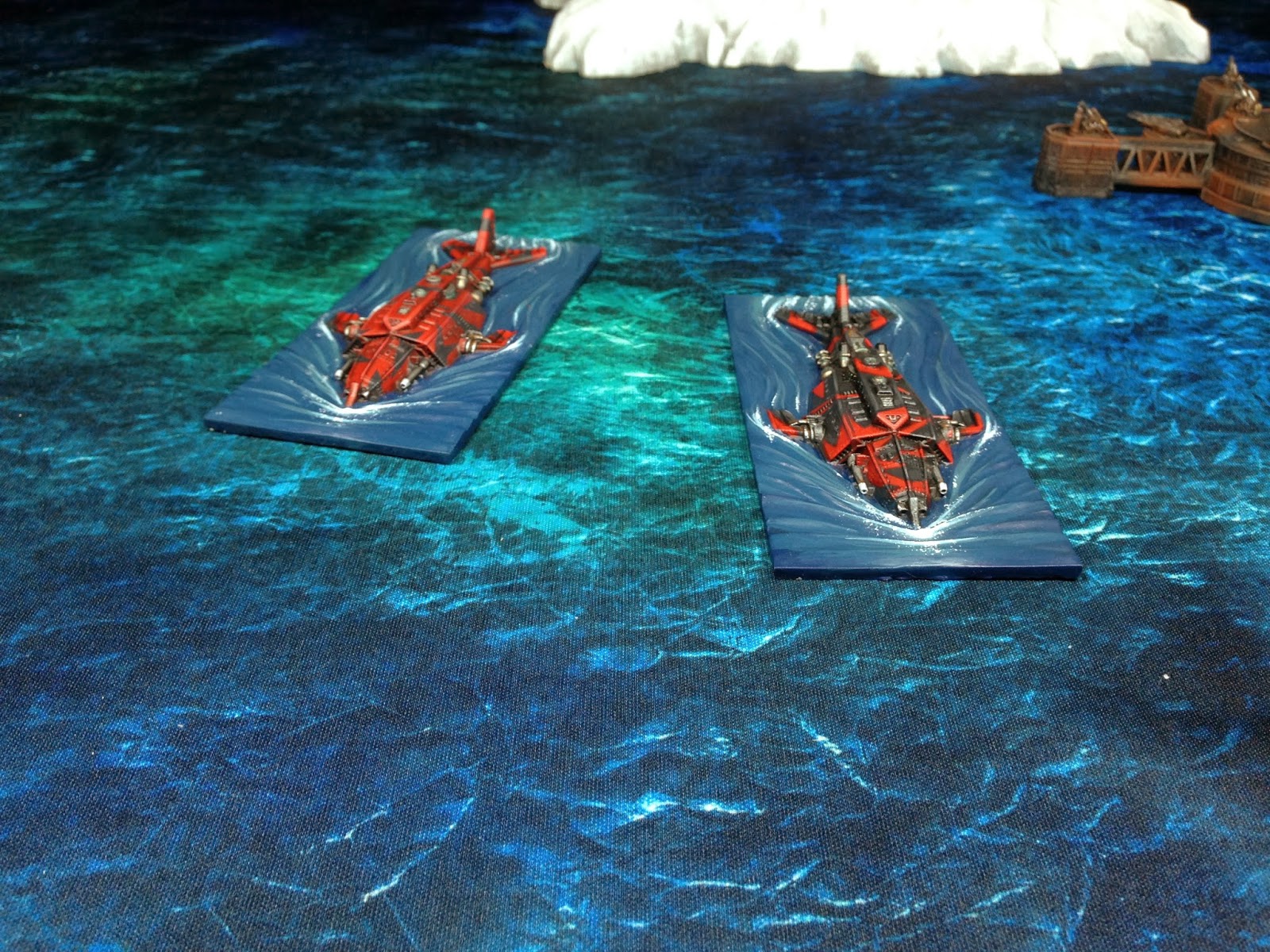 The Black Wolf has been given a fleet of his own, and they've been given all the best toys. All I can think of when playing these guys is one of my favourite scenes in Robocop...

State of the Art Bang Bang

Looking through the fleet booklet, the first thing a lot of people notice is the points cost. This not a cheap fleet, with a relatively small box set (compared to say, the Danish box set) weighing in at 850pts, even without the infamous Captain (Commodore?) Nikonov. After the Corvettes, the cheapest ship in the fleet is 120pts, and comes with a squadron size of 1. The Black Wolf Mercenaries are not here to play a numbers game.

Fortunately they don't have to, because each of their ships is a floating monster packed with enough gunnery to make a Russian player weep, auxiliary statistics to make a French player jealous and enough MARs to make an Ottoman player start crying power creep. I don't want to start sounding repetitive, but this fleet has ALL the good rules, and pays for it in points and numbers rather than obvious weaknesses.

These are but a taste of the terror. Each of the ships also have their own special rules, from the Panic Dive of the Death Bringer-class Submarines to the Combat Co-Ordinator: Dash & Elan on the Manticore-class Support Skimmer, all of which help out with their respective roles. In addition, the fleet carries some powerful Generators: Kinetic Generators across the board, and to help with stealthy ambush, the Echo Generator and the Camouflage Generator.

Used correctly, the short range of the Black Company gunnery will not be considered a weakness. Whereas the Russian ships are limited by slow movement and only protected by their Ablative Armour, the Black Company packs Ablative Armour IN ADDITION to having Camouflage Generators to almost completely cover their advance, Kinetic Generators to get them up the board faster, and Devastating Ordnance to make their turrets that much better than the Russian equivalent.

I say used correctly, but this fleet does not need that much thinking to work well. Just work out where to place your Camouflage Generators and what turn to reveal the obscene firepower of the Death Bringer-class Submarines, and you're sorted.


Such is the power of the Death Bringer and the Nemesis-class Battle Cruiser, the Manticore and the Fury are left feeling a little... left out. This is not to say they are useless by any means; they are in my eyes nicely balanced and need some thinking to utilise well, as any ship in this game should.

It's just that compared to their heavily armed brothers, they lack in sheer offensive gunnery. Sure, they bring something else to the table; the Manticore with its Combat Co-ordinator and Reaper Attack Submarines, the Fury with its potential for Boarding assaults, but when the Nemesis can cause a double critical on an FSA Dreadnought on its own, they can end up looking somewhat lacklustre.

INITIAL GAMING IMPRESSIONS
I haven't had the chance to talk about their status as Mercenaries or the great "One Careful Owner" rule as I simply haven't tried them yet! That can of worms will be dealt with in the future...

This has been a short introduction following my first couple of games with the Black Wolf Mercenaries, and I hope it has been somewhat informative. This fleet is incredibly powerful, restricted only by their limited numbers and high points value. I would not recommend using this fleet against anything less than a fully prepared player with a "good" fleet; anything less will just get blown away.

Hopefully in the future, we will see a counter-tactica article on how to beat the Black Wolf!