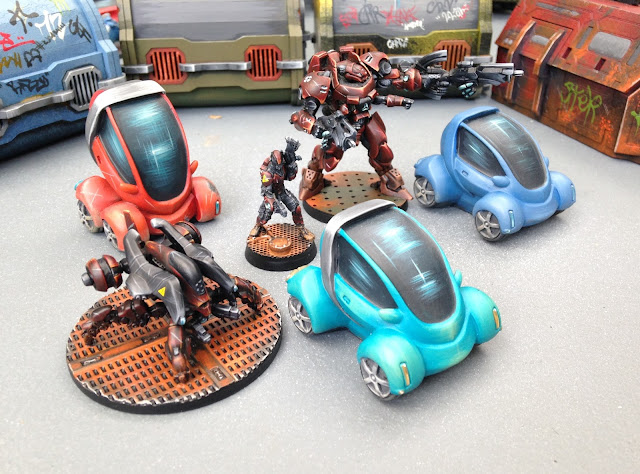 After eight weeks of gaming, including some impressive victories and crushing defeats, the Jurisdictional Command of Corregidor were in fourth place, held up only the additional points earned for painting and two massacres in my favour. The final gaming round was a full ITS scenario, with 300pts per side, and I was drawn against Sean, an old foe with the ever-slippery Haqqislam Qapu Khalqi Sectorial.
Supplies was the mission chosen (different from the standard Game Five of the Escalation League), a fun operation that I was looking forward to, and for the mission I had a force in mind - a modification on my second team from the recent tournament featuring several troopers with Aerial Deployment, the Wildcat Link Team and fast Stempler Zond to grab Objectives.
THE TEAM
Group 1

6 SWC | 300 Points
THE GAME
Sean took Deployment, forcing me to deploy blind against a force featuring plenty of heavy weapons and strong medium infantry. The centre of his force was held by a Link Team of five Djanzaban, each apparently carrying HMGs - holy &%*$! I imagined that some of these would be Holoprojector-equipped Hafzas, but how many, and which ones? Holding another tower were three Sekban in a Haris team, with a Heavy Rocket Launcher, and then on the ground were a number of Ghulam Specialists and heavy-weapon troopers, plus three Yuan Yuan pirates in reserve off the table.

I needed to clear the two fireteams before my force could advance, and the Sekban were the easier target. The Reaktion Zond made the first move, opening fire upon two of the naval troopers. It managed to wound one, but was struck by a rocket and destroyed. The Haris team was broken, though, and the Intruder made his move, dodging out of sight of the Djanbazan to draw a bead. A pair of Double Action rounds put down the Rocket Launcher-equipped Sekban permanently. The Intruder then tried his luck firing upon the Djanbazan, from a point where only two would be able to fire back. One was revealed to be a disguised Hafza and was wounded, but the second was indeed armed with an HMG and scored a critical hit on the Intruder. Ouch!

The Hellcat appeared from the flank close to the Link Team, firing around a corner on two of the Djanbazan and revealing one of them to be a disguised Hafza. The Hellcat caused a wound on that model, but was wounded by a lucky shot in return, This left me three models down in my first turn and severely lacking in heavy firepower! I ended my turn covering my flanks with the Alguaciles going into Suppressive Fire.

Sean spent his first turn grabbing Objectives and using his Doctors to patch up the two members of the Djanbazan Link team. His Yuan Yuans appeared but could not risk being shot by the Suppressive Fire and hid. Sean did not cause any casualties, but had managed to achieve both of his Classified Objectives in this turn and open one of the Supply Boxes, running the Objective back into a well-defended building. It would be very difficult for me to retrieve that box now!

His Djanbazan Link Team revealed, I took the opportunity to unleash the Wildcats in concert with the Tomcat and newly revived Hellcat. The Doctor also took the opportunity to bring the Intruder back into the game - my force was being rebuilt quickly! The Wildcats advanced behind cover and into a position where they could cut down two of the Ghulam infantry, and then bring down the Link team one-by-one. The Wildcats secured the central Objective while the Tomcat opened the last box and fled into cover.

Sean had lost control at this point and the Nomads were rolling over his team. The final moves of the game saw him try to score some kills, bringing down a Wildcat and Immobilising the Stempler Zond with the Yuan Yuans before the Nomads completed their Classified Objectives and the game ended in a 7 - 3 VICTORY.

This was a really fun game, despite the rush because of timing problems, with Sean's Haqqislam utilising all of their nasty tricks to confuse me. Ultimately it did not pay off, as I played safe and committed only where I had the advantage. My Aerial Deployment Specialist Tomcat was the MVP, reviving both the Hellcat and (via the Zondbot) the Intruder, and then going on to secure one of the Objectives. It is really useful to have such a trooper in my list, and he will be a staple for this kind of mission. The Wildcats tore everything they touched apart, as usual, and they worked well in their own Combat Group - this layout will be my new pattern for my Objective-based list.

This week saw the final rounds of the Escalation League played out, and with the gaming finished we now have only the painting competition to decide things. At the end of the League, all the players have been asked to submit the models painted over the past few weeks and put them to a vote - the winners would score more points for their final total, and potentially shift their ranking. More to follow once the painting aspect has been judged!