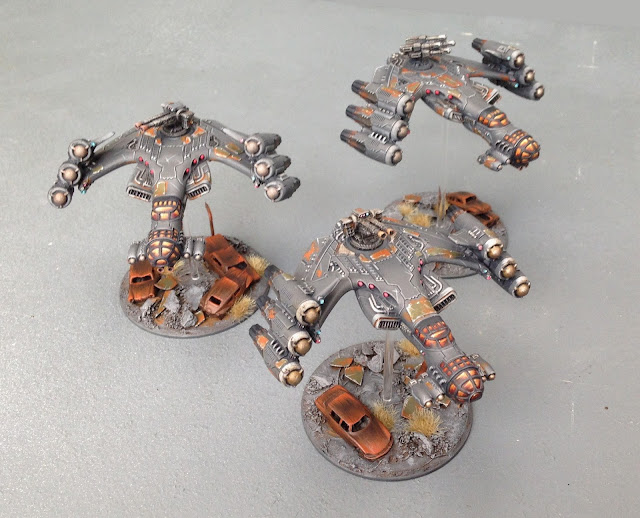 The Autumn Invasion and Open Weekend is one of the flagship events for Hawk Wargames, an entire weekend of Dropzone (and soon to be Dropfleet) fun, with new products and future releases on show as well as the tournament itself. This event has sold fifty seven tickets, so will be one of the largest tournaments I have attended for any system!

INITIAL THOUGHTS
As you can imagine, with my limited experience with Dropzone Commander I am not planning to win the tournament, but I have been very successful in recent games and hope to place somewhere vaguely respectable. The bigger prize for me will be the Best Painted Award - there are a LOT of really nice forces on the Hawk Forums, but I hope I can make an impression.

THE TEAM
Accompanying me will be my friend Simon, who has a fairly good record with his PHR (unless he's playing against me!) He favours experimenting with new combinations and units, and loves his Helios AA grav-tanks, but has had some vicious experiences of the Resistance fighting at their full power. I hope he will be able to pull off some tricks against new opponents at the tournament, and can work out how to use his two Type-4 Walkers to maximum effect.

PRACTISE GAMES
Alien versus Predator and other games have distracted most of our local gaming group, so the past three games I have played have all been against Simon and his brutal Type-4 Walkers. Although they do well smashing my toys at long-range, somehow the Resistance has won four of our five games, with the fifth being a Draw.

Focal Points are my strongest suit, especially if I can deal with the enemy AA quickly, and my massive amount of anti-tank weaponry usually helps with this. Experiments with more AA units has always required losing something important, like Freeriders or Cyclone Gunships, and I am simply not willing to do this at the moment. Hopefully I won't draw any air-cavalry armies, and the Scourge/Shaltari will keep out of my way! It's a terrible gamble to have my list lacking in AA, especially given the limited nature of my practise games is not a good example to learn from, but we will have to see how it turns out.

This is a brutal list, with the Rusted Fist Detachment in particular carrying a horrific amount of firepower. I am glad to have the two units of Freeriders back in there, as even if they do not cause any damage, they drive my opponents crazy! The four Cyclone Gunships is a gamble - I want to use their Barrage weapons at long range to achieve an Alpha Strike, and having four gives me that opportunity, but they are also very vulnerable to AA fire and expensive as hell.

This list is a return to an older list used at a previous tournament, as I had  recently been experimenting with more Gun Wagons (at a cost of Freeriders) and Zhukovs, but overall I prefer the hammer-blows this force offers, and sacrificing the Hannibals or the Freeriders is just too much. The loss of the Breaching Drill may turn out to be a mistake, but the opportunity for four Gunships is just too tempting!

Painting wise, I had spent the past few weeks painting models for alternate lists, but now I have changed all that and opted for the fourth Gunship - I guess I will have to paint that now! I am hopeful I can get it painted on time, but I am worried the War Rig will not be finished - it look like a hard week at work before the tournament, and I want to give it a lot of attention.

So there we are, some thoughts on my practise games, my list, the painting I still have to do. Less than two days to go!