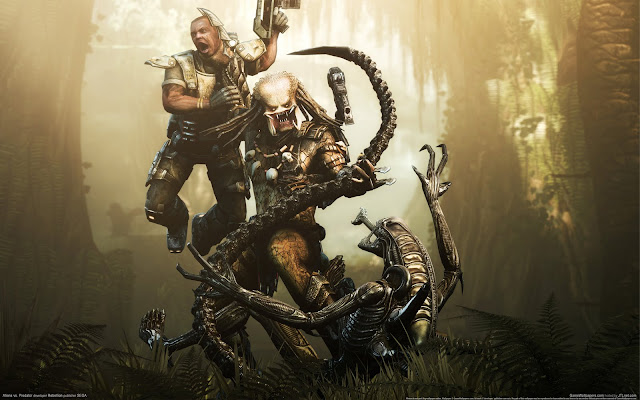 Finally, after innumerable computer games, films, comic books, novels and vague attempts by various small miniature companies, we have a fully-formed and incredibly good looking miniatures game for Aliens versus Predator. AvP: The Hunt Begins is now available (initially as a board game, but with a full wargame inbound) and it looks sweet.

I have loved the Alien and Predator universes since I was a kid (I had an excellent upbringing, watching all of these movies by the time I was ten), and found the original Aliens versus Predator comic (now called Prey, I believe) to be completely enthralling. The first comic did not feature any Colonial Marines, but soon enough more comics and computer games came out, and there they were - ready to be brutally culled by the alien forces hunting them. 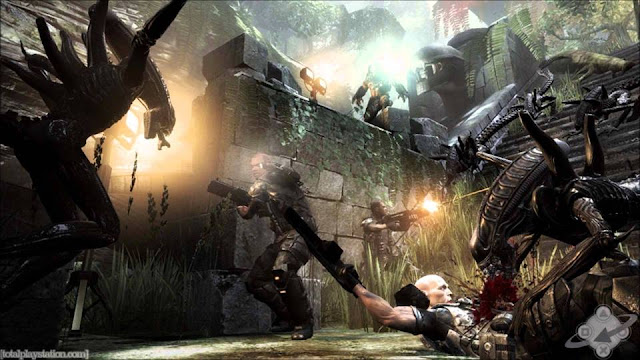 I could spend a long time talking about my love of these franchises (yes, even Prometheus... but not so much the first AvP), but the chances are if you're a sci-fi wargamer you've experienced them and enjoy them too. When the Kickstarter was announced for the Aliens versus Predator board/miniatures game in 2013, it was an easy choice to start applying for some credit cards. 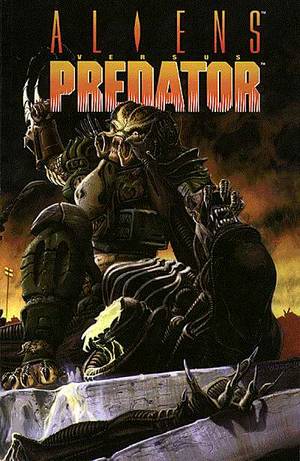 THE RANT
Before we start talking about the game itself, I must vent. Some two years ago I pledged a *large* amount of money for the Aliens versus Predator Kickstarter, which at the time looked like one of the most exciting products I had ever seen, and was right up my alley as an Alien/Predator/Colonial Marine enthusiast.

The following two years has been nothing short of a massive disappointment. Progress has been interminably slow and communication patchy, but what really infuriated me was the fact that they have dedicated themselves to getting copies to retailers long before any attempt to fulfill the pedges. My local gaming club received their copies to sell before any of the Kickstarter pledges, and mine was nowhere in sight. I eventually gave up and bought an *extra* copy from my local gaming store so I can play now - well played Prodos, you've got my money twice.

I am not one of the (many, justified) people complaining on Facebook or other forums. Aside from this blog, I don't tend to post much online. Nonetheless, now I have the game and am typing about it, I felt it was time to let loose.

Ultimately, it has all but put me off Kickstarter entirely, and I would certainly not be recommending Prodos or anything else they produce to anybody. Despite this, I have the game in hand and it looks spectacular. The models are sublime. Forgiveness may be sometime off, and I have little doubt that I will be waiting another two years before receiving any of the models I have paid for, but here we are. My desire to build, paint and play with these awesome models outweighs a lot of the built-up anger. 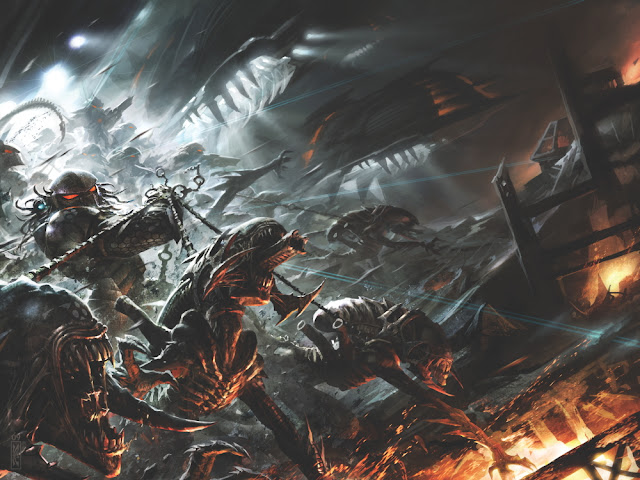 THE GAME
Last night we had a demo night for AvP, with eight of us playing over three boards. The board size is good, roughly 3x3 for the initial campaign, and the tiles (after getting used to all the different iterations) fit together nicely and are of good quality card stock. The cards are all lovely, though some of the smaller markers and tokens need to be cared for when they are initially cut out.

The game itself was a lot of fun, especially because I won! As the Predators, I cautiously made my way through the ship while the Colonial Marines and the Xenomorphs destroyed one another, before launching my attack to mop up the survivors. Highlights include a Marine opening a door and unleashing his flamethrower on six slathering aliens ready to attack, the Predator will Disc decapitating two Marines with one throw down a long corridor, and the Predator with Spear taking out four Aliens in combat before being dragged down by the last surviving creature.

The game plays fairly quickly (once we knew what we we're doing), and though the initial games seem to favour the powerful Predators, I can see it becoming a lot more balanced with the addition of some upgrades, extra troops or bigger monsters. I cannot wait to throw down a Predalien or Alien Queen!

The Aliens die very quickly and are somewhat lacking in combat punch (they are meant to be Infants, afterall), but looking at the stats the fully-developed Warriors should bring them up to scratch very quickly - enough to take on a Predator alone.

Other aspects of the game may also work better with practise, like the Ping! markers giving the impression of the Predators cloaking devices. These could do with some more work to make them play in the a cinematic manner reminiscent of the movies.

As we had eight players, one of the boards was played using only Predators versus Aliens. It was a bloody slaughter, as the Aliens were butchered when they tried to rush the Predators. Later in the game a reserve brood left the battered Predators with nowhere to go, and it was left a stalemate. The initial boardgame seems balanced for three factions, so you will need to start looking at the points values and different Mission Objectives for one-on-one games to work out.

Overall, so far, so good! Obviously I need more experience, but my first try was a lot of fun and I can't wait to break out the models and get painting. The idea of games with different, bigger Aliens to take on the Predators is exciting, while more chances for the Marines to kick ass will also be welcome. I myself will be concentrating on the Predators first, as they were always my favourite in the games and comics. 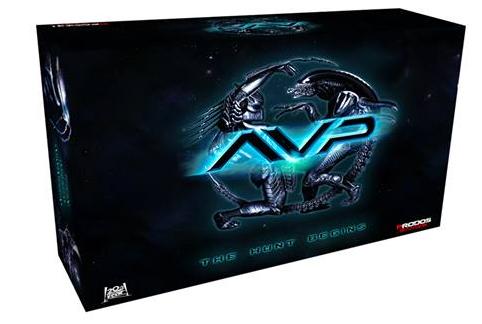 THE MODELS
The miniatures included in the initial board game are, quite frankly, stunning. I was incredibly impressed with the level of detail when compared with the cleanliness of the production - very few mould lines, flash or miscasts to deal with. The Aliens were particularly impressive with their segmented tails, while the mesh on the Predators was another highlight. I was worried about some warping on the spear of the Predator, but this too was fine - excellent!

Some of my friends had already made their own special bases with decking and tread-plating which looked great, while I know another friend has ordered resin bases infested with hive-like ribbing and growths. I think I will stick with metal decking, but will add colour with blood and acid sprays, worn markings and some glowing lights. At the moment I am torn between a number of different suppliers (each with their own pros and cons) but also torn on what style of bases - round lip or straight edge. The round lip would match with those that come supplied (and are probably a requirement of both the game and the poses the larger models hold) but a straight-edge base would enable the models to be used in other games for special scenarios or proxying. I will probably go for round lip bases, if only because they will be big enough for the larger models and their wide stances. I guess they could also fit into the Batman game by Knight models quite well - crossover time! 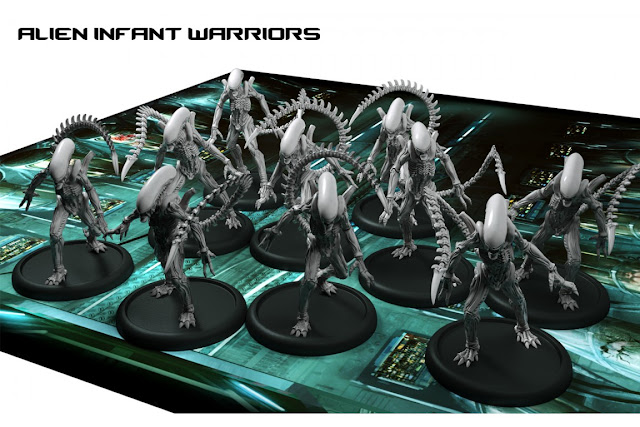 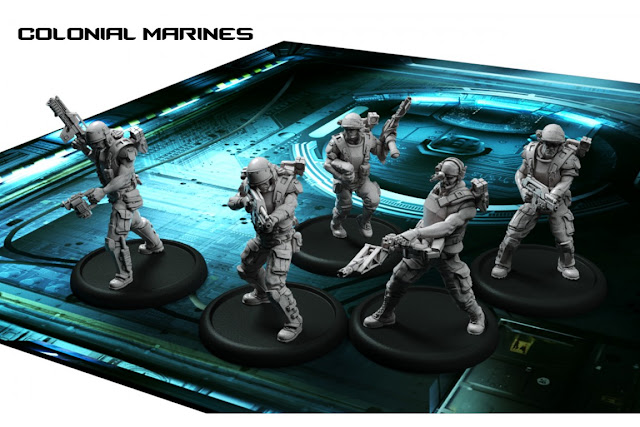 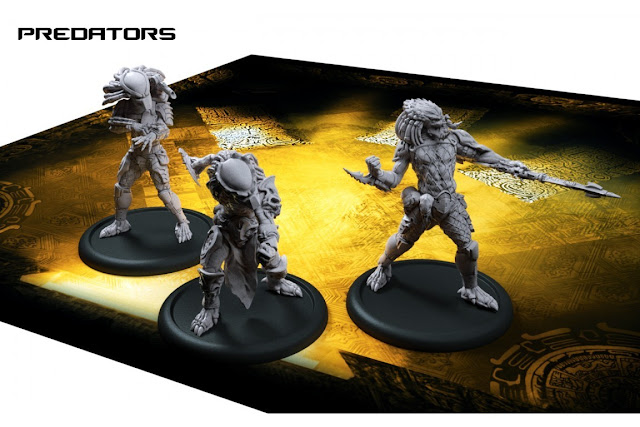 THE FUTURE
The coming months could (could being the operative word) bring us some very nice models and expansions, starting with the models first planned during the Kickstarter. Renders and prototypes have been shown off for many months now, and below are some of my favourite. I am especially looking forward to the Alien Praetorian, the Powerloader and the Predator Youngbloods, but really anything and everything they have planned looks great. The detail continues to astound (the facehuggers and eggs show this off in particular) and I hope they stick with resin for their future releases. 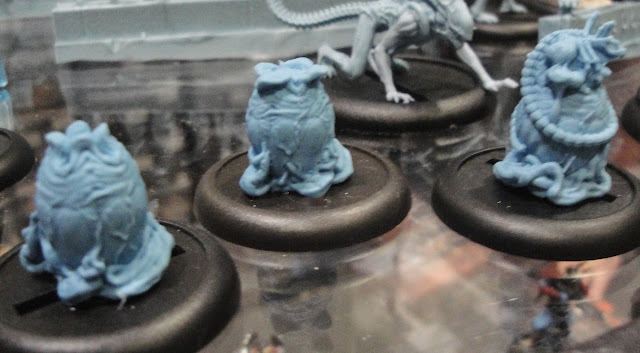 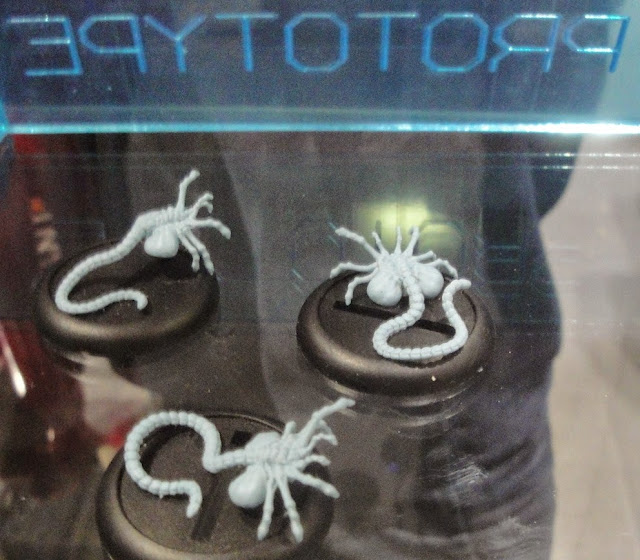 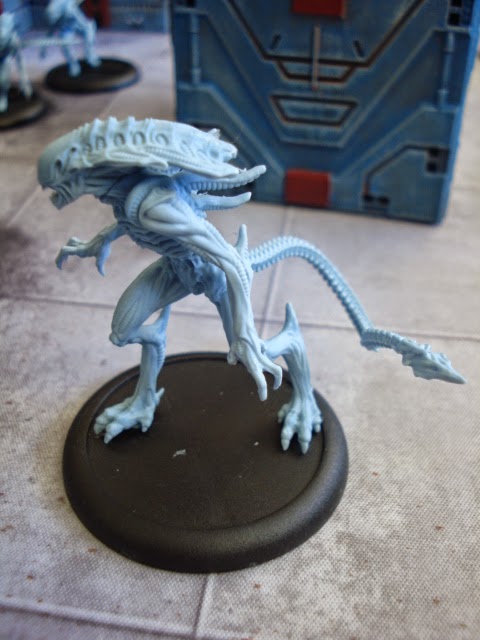 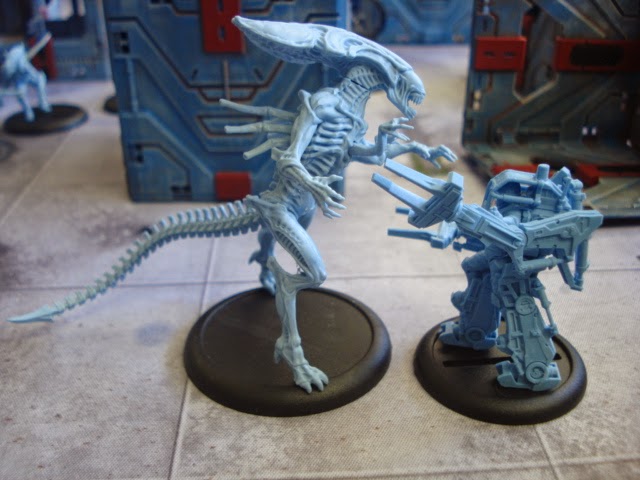 In my mind, there is a huge potential here, and I hope it expands quickly.

Soon I will be in a position to show off some models and Work-in-Progress painting, so we'll see how much I can finish before my Kickstarter pledge arrives!

Email ThisBlogThis!Share to TwitterShare to FacebookShare to Pinterest
Labels: Alien versus Predator