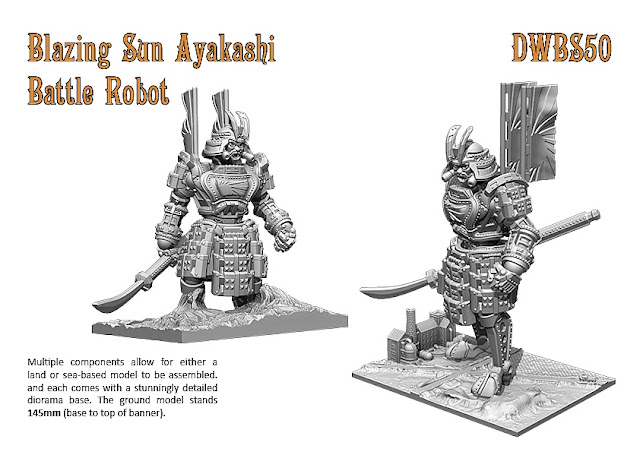 Dystopian Wars has been a little quiet this summer - the immense Halo: Fleet Battles release has dominated most of release schedule and only the limited Danish release has really attracted my attention (more to come on that front soon enough). Halo looks great, but I never played the computer game(s) and have been distracted with other game systems in the mean time.

BUT NOW WE'RE BACK IN BUSINESS! 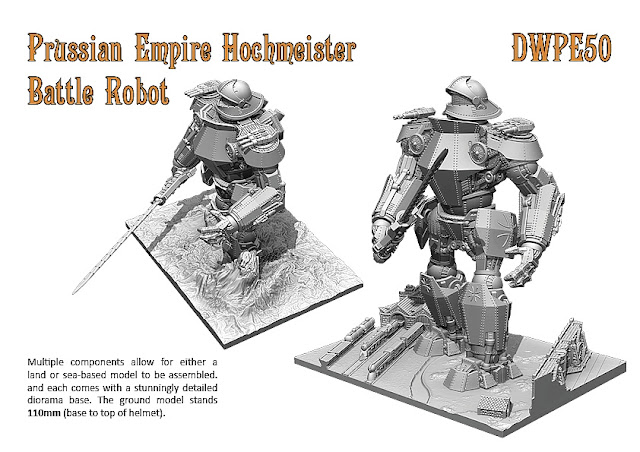 The Scandinavian Teutonic Order is infamous around the world for its Battle Robots, and are generally accepted as the leaders in the development and research of these creations. But up until now the small territory has never really had the production capacity to take their creations to the next level. Following the Full Cooperation Pact signed between the Prussian Empire and the Teutonic Order in late 1871, their dreams of conquest finally seem to be within their grasp! The Hochmeister Dreadnought Battle Robot marks the pinnacle of the new alliance, marrying the industrial capability of the Prussian Empire with the ingenious engineers and inventors of the Teutonic Orders to create a true monster in the field of Battle Robot development.

Armed with a pair of wrist mounted Speerschleuders and a pair of shoulder-braced primary gun turrets, the Hochmeister has a fearsome array of firepower at its disposal. In certain cases Hochmeisters can also be adapted to have external Calcification Generators with a vastly increased range and even Guardian Generators (which up until now had been a solely Teutonic creation). It is even possible for the Hochmsieter to replace its primary turrets with a pair of Speerscheluders, however to do so affects its ability to activate its internal Tesla Generator due to a loss in power.

With the strong Prussian influence in both manufacture and testing of these ‘Dread-Robots’, the battle robot crews have begun to investigate various fighting techniques that have become possible with the improved design. The Hochmeister’s increased mobility and speed over the previous Saint Michael and Metzger allows a rigid set of fighting styles taken from the medieval Germanic Sword Fighting Schools.

Using the manuals of Liechtenauer, a famous 14th century Sword Master, as a basis for the development of their fighting techniques, the crews can now execute punishing attacks using sword and maces, delivering powerful killing blows to their enemies using techniques such as Zornhau and Scheitelhau with devastating effect.

It will not be long before the Hochmeister causes the enemies of the Teutonic Order and Prussian Empire to shudder as its thunderous tread rocks them to their core.

The ground model stands 110mm (base to top of helmet)

The origins of the Ayakashi Dreadnought Battle Robot are shrouded in secrecy. Created in the hidden forges of the Yani using their own mix of alchemy and technology, the plans for these massive battle engines were originally presented to the Empress at the end of 1871. The supreme ruler of the Empire of the Blazing Sun immediately decreed that these mighty symbols of her people’s military tradition should be rushed into production.

The Ayakashi is armed with a massive galvanised steel Naginata Pole-Arm, honed to a razor edge and more than capable of carving through vessels, fortifications and armoured vehicles with ease. The crews of the Ayakashi Robots are free spirited and meticulously drilled, frequently taking the capability of their vehicles to their maximum tolerance in an effort to develop a series of fighting styles that mirror the ancient warriors of old. These fighting styles give the Ayakashi an un-natural grace on the battlefield, belying its considerable bulk enabling it to unleash attacks that mirror a human Samurai in almost all respects.

When enemies exist beyond the range of the melee-fighting styles of the Ayakashi and its Naginata, the crews rely on more conventional weaponry, engulfing the enemy in dual heavy flamethrowers mounted in the face mask and firing a pair of Rocket Batteries, one mounted in the back pack of the robot, the other more powerful battery mounted in a powered rocket fist!

The Ayakashi Dreadnought Battle Robot instils pride and fear in equal measure: pride in the forces of the Empress who view its creation as their ultimate technological achievement in the field of military research, and fear in the enemies of the Blazing Sun, who view the striding behemoth as an un-killable machine, made all the more terrifying by its human countenance.

The ground model stands 145mm (base to top of banner) 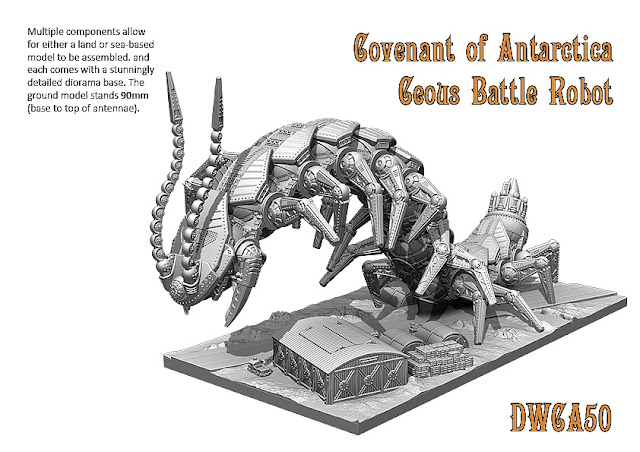 Who knows what goes on in the minds of the Covenant engineer-cadres. Clearly the creation of the Coeus Robot takes its inspiration from nature, but it requires a mind unfettered by constraint to envisage a creature-robot-creation of such epic proportions!

Capable of performing on Land and on Sea, the Coeus mounts a powerful Particle Accelerator that is tied into the robots combat methodology. The flexible plates that make up its outer carapace make the creature-robot highly adaptive to its environment, allowing it to twist and grapple with its opponents, ready to bite down with its powerful mandible jaws prior to ejecting its particle weapon deep into the workings of its prey.

When forced to remain on the surface, the Coeus opens up its back blisters to reveal the multiple rocket batteries that are housed within. These missiles use a form of lock-on technology allowing the ‘Dread-Robot’ to essentially ‘fire and forget’ while it rushes to close with its intended prey.

Current information from spies within the Covenant had the mighty Coeus Dreadnought Battle Robot being primarily tasked with the defence of the settlements surrounding the Covenant home base on Antarctica, however in recent months there have been documented sightings in northern Africa, Australasia, and even eastern Europe, leading many military planners to suggest that the forces of the Covenant have been slowly stockpiling their ‘Dread Robots’ ready to unleash them on their enemies in a stunning lightning attack – this belief has led to a strengthening of subterranean and surface defences around the major power centres of the core nations, each concerned that it will be they who suffer the wrath of a concerted, nigh-unstoppable Coeus assault.

The ground model stands 90mm (base to top of antennae)

These things look ridiculous, and I love them. I am especially impressed with their detailed scenic bases (the train track on that Hochmeister-class Battle Robot!). but am pleased that they come with the option for ocean bases as well.

Needless to say, the Prussian Battle Robot will be purchased, and I will need to resist picking up the monsters for the Empire of the Blazing Sun and the Covenant of Antarctica - two Nations I don't even collect (yet!). They are a little pricey (Spartan Games seem to have gone this way lately), but I look forward to carving a Battleship in half with a gigantic sword!