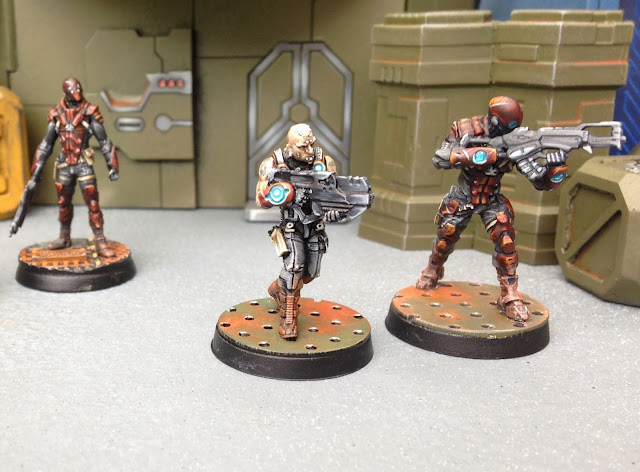 After the Dropzone Commander tournament last week (report on the way!), I have returned to the Infinity fold for the second round of the Escalation League, bringing the Jurisdictional Command of Corregidor in for the fourth and perhaps final of such events. Following eighteen months of play, the "High Rollers" have seen their numbers swell to that of a small army, and now only a handful of models are left to paint for them. 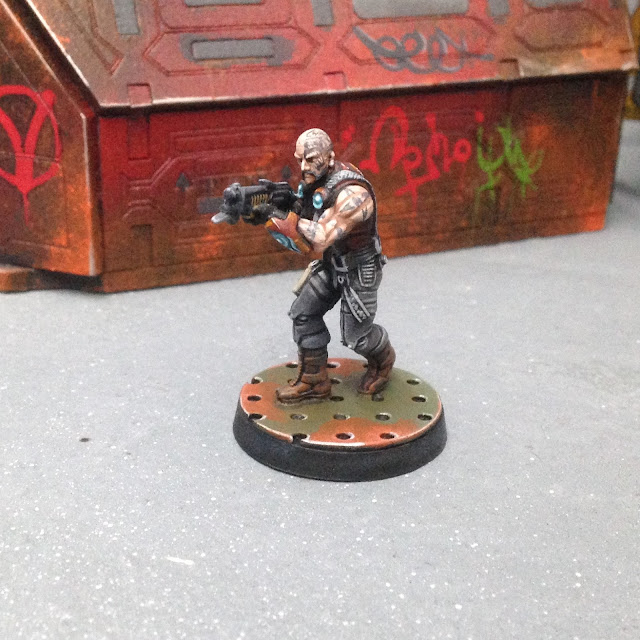 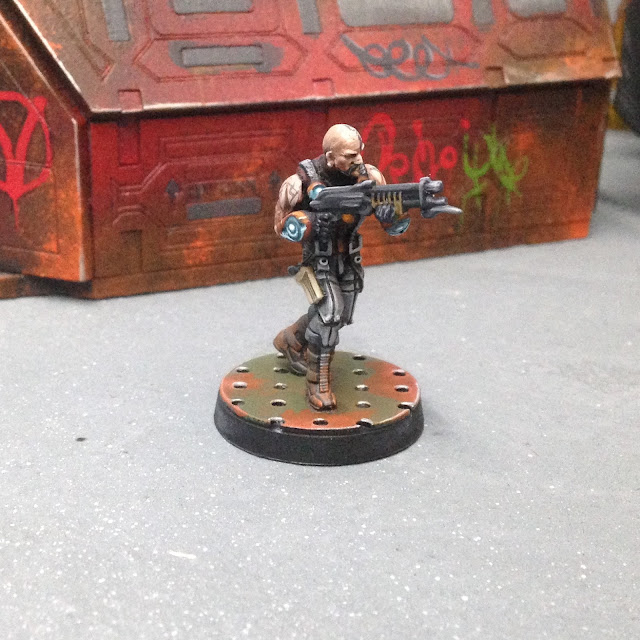 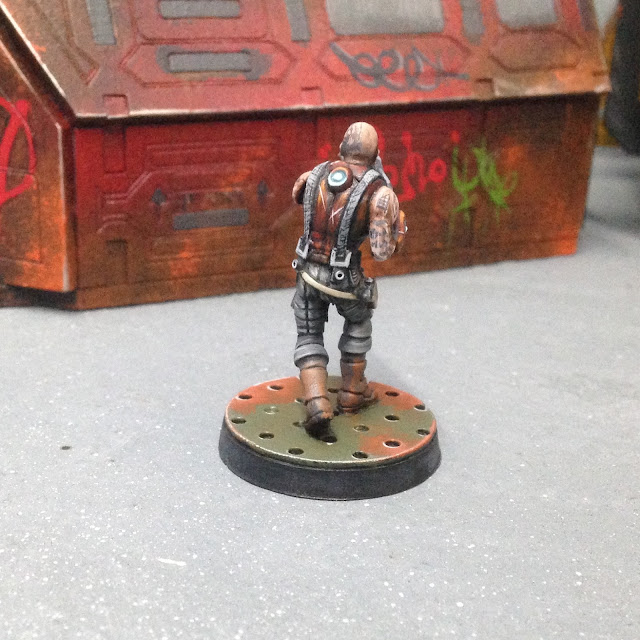 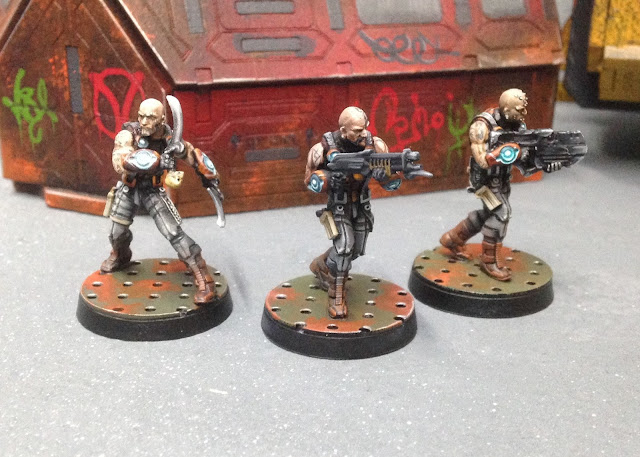 THE HOBBY
The "Hobby Points" section of this Escalation League offers great incentive for me to crack on and finish the last few models before Corvus Belli can release another set of beautiful Corregidor models (the Mobile Brigada Link Team is causing me enough trouble without thinking about the inevitable Bandit release), and who knows, if I finish them I might have the will to actually start a new faction!

This week, I have started work on the Mobile Brigada, aiming to have them done before the end of the League. In a spare couple of hours I also painted a third Jaguar, which was a lot of fun! I decided to give me tattoos down only one side of his face, which gives the model something to differentiate it from the similarly posed Chain Rifle-wielding Jaguar. I find with these models, the areas you do not paint tattoos is interesting, as so much of the exposed flesh is covered.

This model is not exactly a priority for the team, but I do want to field a full Jaguar Link Team in the future, and now I am one step closer! 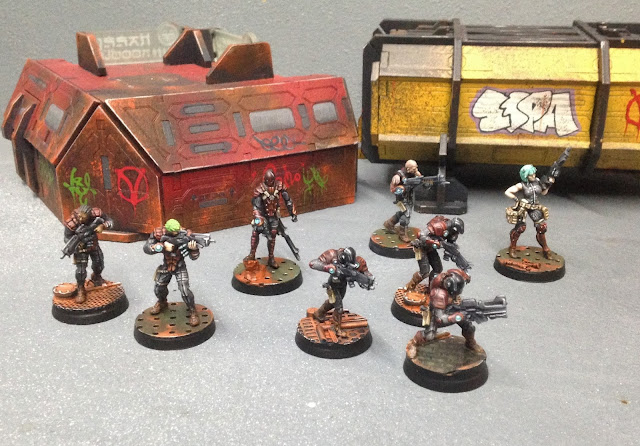 THE GAME
For this round, my opponent was a relatively new player named Peter. I had faced him before in a 300pt game where he fielded the Morat Aggression Force, but he had moved toward the Merovingian Rapid Response Force - far more tricks and annoyances! I had never faced the French before, but was well aware that they could run some nasty camouflage and had access to some very cheap troops.

My list was brutally simple. An Intruder with MULTI Sniper Rifle, Jaguar with Chain Rifle, three Wildcats, led by one with a Spitfire, two Alguaciles and a Daktari Doctor. Three SWC, eight Orders and 149pts seemed to me a pretty solid list, though I might miss the Hellcat with Boarding Shotgun who performed so well last round. The Wildcat Link Team was a gamble, as I rarely used such a small team, but felt investing in a five-man team at 150pts would be too much, and force me to make serious compromises in the rest of the list, as well as the team itself.

Pete was running a Link Team of Metros with an HMG, Molotok and Jacques Bruant, a lone Moblot, Loup-Garou, Chasseur and another hidden Metro Lieutenant. The game did not go well for Peter, as in my opening moves the Intruder shot down an exposed Metro with HMG, discovered and killed the Chasseur, and then the Wildcats moved up, disabled a Mine and shot down the Loup-Garou.

In his Turn, the MRRF managed to wound the Intruder, but the Moblot was killed in the process. The Metros hid in a small building, and then engaged in a massive firefight with the Wildcats that left them all dead. The Intruder was revived, and the Jurisdictional Command of Corregidor had taken down all of their opposition with no casualties. Brutal!

Peter was let down by some poor deployment and worse dice rolls, losing almost every single Face-to-Face roll and failing all but three of the many, many armour rolls he was forced to take. The Wildcat with Spitfire performed like clockwork, lighting up the enemy and causing seven of the nine kills.

With ten points earned in this mission, I would be at the top of the League table! Time for some serious opposition in Round Three... 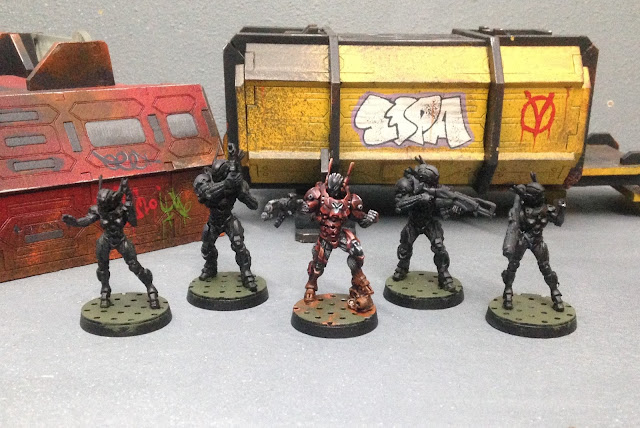 THE FUTURE
The next round will be 200pts, allowing me to get closer to my Comfort Zone. This mission will be the first with Classified Objectives, which will make things more interesting and compel me to run some Specialists. I may need to return to something close to my list from Round One, but now I have the points for a proper Link Team, and importantly, Hackers.

Painting wise, work will continue on the Mobile Brigada, but for something simple I think I will try another Jaguar, a Stempler Zond Remote or perhaps an Alguacil.