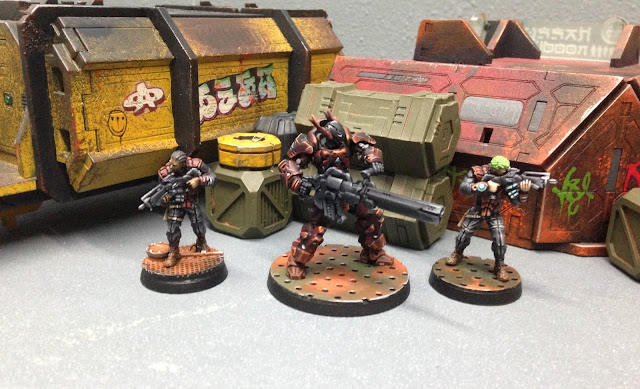 This week I have been concentrating on another addition for my Infinity collection, one of the fantastic Special Deterrence Group Azra'il. Converted slightly with the head of a Mobile Brigada, this model was the first iteration of my proxy McMurrough, Mercenary Dog Warrior  made some months ago. Finally I have finished painting it, ready for the third round of the latest Infinity Escalation League.
I used this model because I am not a huge fan of the McMurrough model, and wanted something suitable to proxy him in my Jurisdictional Command of Corregidor force. I trust it will not be too confusing. In the future, I might expand my Nomads into the Qapu Khalqi Sectorial for Haqqislam, with a strong Nomad-influence. At this point I could run him as a proper Azra'il.
Since the release of this model and my subsequent purchase and conversion, Corvus Belli have released the Azra'il with HMG, a model I think is far more suited for conversion and proxying as the weapon is easier to turn into a giant Chain Rifle. I will be buying this model soon enough and working on the second version!
Painting the Azra'il was fairly long-winded as he is covered in armour plating, but once the red was finished the rest of the model came together rather quickly. The biggest problem I am having with my Infinity models at the moment is keeping the colours consistent - because I only paint two or three per month, each with wildly different amounts of red armour, sometimes I forget the correct ratios of red and ochre, etc. I trust that he matches the warmer reds of the Alguaciles and Remotes, but worry he is somewhat more orange than my Mobile Brigada.

What's next for Infinity? The second Azra'il potentially, or something a little smaller...