AAR - The Kingdom of Britannia versus The Prussian Empire

"In the wake of the Fair Isle Incident, the engagement between the Russian Battle Group Vityaz and Britannic Task Force 37, tensions were high between the two supposed allies. No longer operating in concert to track the Markgraf, the fleets of these two Powers operating in the North Sea were on constant alert. Through the storms and squalls that plague those waters, they jumped at shadows as their eyes scanned the horizon.

The Kingdom of Britannia secretly deployed a number of Wolf Pack flotillas into the theatre, obliquely to track the movements of both their enemies and their supposed allies while operating counter to the Prussian Wolf Packs still roaming the North Sea. The largest of these submarine groups was the 7th Submarine Squadron under the HMS Auriga.

Mere weeks after the horror of the Fair Isle Incident, the 7th Submarine Squadron was tracking Russian movements south of Egersund when they chanced upon a small Prussian flotilla following a similar mission. Surprise was on their side as they launched the attack, or so they thought..."

The Hunt for the Markgraf (cont.)
Naval Battles of 1874 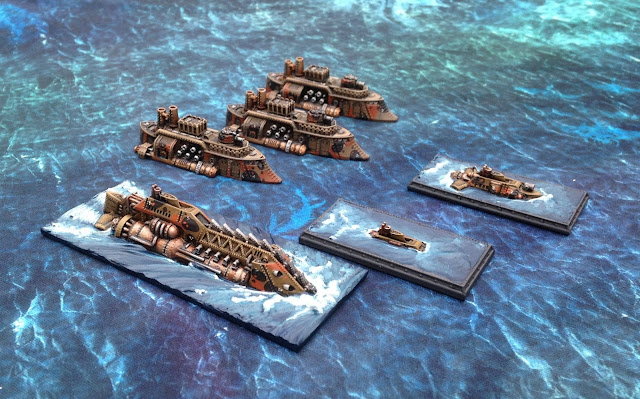 Welcome to another Battle Report from Full Spectrum Dominance, and the first appearance of the Kingdom of Britannia as a standalone force. This report is also my first game with an all-Submarine force, so please excuse the poor gameplay and general ineptitude on show! To add to my misery, Mike will be running his old favourites the Prussian Empire, and has been forewarned that he faces all-Submarines. Whether he will take this into account is another story!

THE SCENARIO
For the mission today we have chosen to take a break from the Ironclad scenario pack or any other special scenarios and just pull Secret Objectives from the deck. This should give a "fair" assessment of the new fleet. The composition of the fleet is mixed, with two squadrons each of Large, Medium and Small, so I was not worried about being undone in this regard.

Drawing Secret Objectives, the Prussian Empire drew Break Their Backs! meaning Mike would have to destroy both of my Vanguard-class Submarine squadrons and score at least 455 Victory Points (50%). The Kingdom of Britannia were more concerned with crippling the Prussian airpower, so their aim was Go For Their Leader! I would have to destroy or capture the Rhine-class Assaul Carrier (his Commodore) and similarly score at least 455 Victory Points.
THE FLEETS
The Kingdom of Britannia
HMS Auriga - Vengeance-class Submarine
HMS Astute - Vengeance-class Submarine

AFTERMATH
At the end of the Third Turn the Kingdom of Britannia had achieved their Objective and scored 658 Victory Points, while the Prussian Empire had only scored 463 Victory Points, leaving it a strong VICTORY FOR THE KINGDOM OF BRITANNIA!
Playing to the end of the Fourth Turn, things did not get better for the Prussian Empire - with their extra losses and the Prizing of the Uhlan-class Cruiser, they had lost 895 Victory Points, while scoring a total of 493 Victory Points and still not achieving their Objective.
CONCLUSIONS AND LEARNING POINTS
Overall a very different game to usual, playing Dystopian Wars at a new height level to an extent not seen before! The all-Submarine force plays strangely, but is a lot of fun. I am still not sure how I managed to pull a win out of the bag, as Turn Two was looking decidedly dodgy. However, once the chainsaws started revving up it was their time to shine!

Three big moments stand out for me - the explosion of the Mine around the Uhlan-class Cruisers that damaged them badly, the damage to the Konigsberg-class Battle Cruiser that took it out of the game so early, and the loss of 5HP on the Rhine-class Assault Carrier is one brutal Ramming attack! This destroyed the vessel, and won me the game.

The power of the chainsaws is something to behold, and in combination with boarding the Britannian Submarines have a real power in RB1. I think I took out more vessels in close-range assault than with the torpedoes!

Their torpedoes are frankly lacklustre, but I doubt this is a list intended to be used alone - with better use of the Target Painter and long-range fire from the more traditional naval vessels to bring down enemy CC, the torpedoes will cause a lot more damage.

The Vanguard-class Submarines are probably the weakest link for me - I feel they need something make them better as their torpedoes are poor and speed middling. Advanced Engines/Streamlined Hull would be nice to give them more chance to use the chainsaws, or actually giving the massive broadsides on the side of the model a statistic! I guess they are meant to be used in conjunction with other vessels (especially Target Painters), but I'm after something else.

The Submarines have strong defences with the water, but once that is taken away with Hunter (Diving) or Sub-Killer, they get trashed very quickly. Exposing them to boarding also caused me a lot of trouble - I think all but one of the Valiant-class Attack Submarines were brought down by counter-boarding.

In the future, I think the Submarine contingent will work with a traditional naval force, and I think with their matching colour schemes the Indian Raj will be a powerful ally - now I just need to work out the balance!

Mike's fleet was sound on paper, and could have caused a lot more damage had his dice been kinder (especially the boarding). The nature of everything being underwater can be frustrating to play against, but I think Mike quickly worked out what he needed to do - just actually doing it was the problem!

The Beschützer Squadron was impressive, or at least would have been had they not lost the Konigsberg-class Battle Cruiser so quickly. The Wachter-class Escorts are surprisingly dangerous, and adding some more of those across the fleet will really turn it into a boarding nightmare!

This experiment has revitalised some of our interest in the rich ruleset of Dystopian Wars, and we will be intending to run a more varied mixture of height bands in the future - a game ranging from the deep to the sky will be quite impressive, I think!

THE NARRATIVE
"The 7th Submarine Squadron engaged a small Prussian Hunter Fleet off Egersund, cutting them off and shredding them with their immense chainsaws. At some cost, the enemy had been defeated and another threat to Grand Coalition shipping dealt with.

The Squadron withdrew to Britannian waters for refit and repair while the Royal Navy and the Russian Coalition poured more vessels into the North Sea. The inevitable Prussian counter-attack was expected soon, but where? And would the Markgraf be leading them?"