The Tyrant of Atlantia 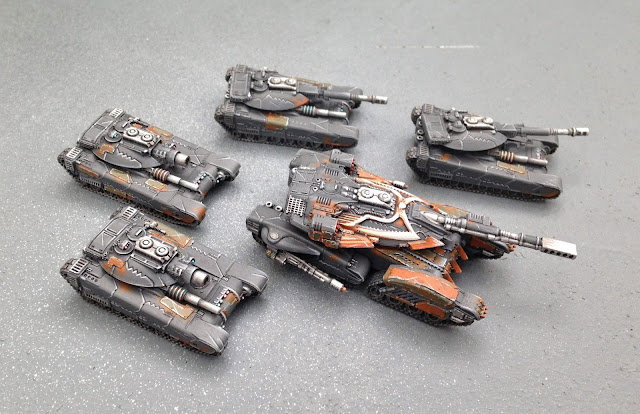 Salakahn, Tyrant of Atlantia has finally joined the ranks of the Resistance! Despite being one of the first Special Commanders released for the game, he is third for me to paint. Riding a modified M3 Alexander into battle, the model for Salakahn features extra armour, an enhanced missile system for the Maelstrom Grenade Launcher and a strange shield generator-like device on the turret - some PHR array of some kind, methinks!

As a very expensive Feral Commander mounted in an Alexander, Salakahn has never really appealed to me, but the model is still very nice and I enjoyed painting it. His rules are fine, and his Command Cards, as with all of the Special Commanders, even better. Looking closely, I think he could be a lot of fun to run, and I might consider taking him for a special game.
SPECIAL RULES
SALAKAHN'S M3 ALEXANDER
Beefier and featuring some suspicious "enhancements," Salakahn's mount has an extra DP and a 4+ Passive save - very tasty! Those PHR friends must have been generous. This makes his tank extremely tough, and probably worth throwing into a firefight against even the worst Shaltari and PHR gun-lines. I imagine most of them would want to avoid wasting their shots.

The downside of this model is, as with all Alexanders, the Lifthawk tax. Adding another 70pts to the price of Salakahn is a bitter pill to swallow, and relegates him to seriously big games.

SEIZED POWER
Salakahn has at his disposal a huge number of tanks and ex-military hardware. As such, Hannibal and Zhukov tanks are cheaper, Hannibals may be taken as Standard choices, and M3 Alexanders may be taken as Heavy choices! A fun and characterful rule, not game-breaking by any stretch as even with a discount these models are hardly my favourite choices.

RULE THROUGH FEAR
Infantry in the army gain bonuses to their Fortitude tests and automatically pass when within Line-of-Sight of Salakahn. Fun, but again hardly worth getting excited about - Resistance have great Fortitude values and I can recall failing only a couple in the past year.
SPECIAL COMMAND CARDS
IRON FIST
One Battlegroup (one with a lot of armour) gains a 5+ Passive save and an increase in their accuracy, until they are next activated. Very nice card, and worth building a huge Heavy Battlegroup to play this on - I'm thinking Zhukovs, Mehmeds and Alexanders!

YOU HAVE FAILED ME FOR THE LAST TIME...
All friendly units may re-roll misses, but if a 1 is rolled they take damage and the bonus is lost. Wow - this could turn the battle! Play this in a key turn (3-4) and watch your army clean up. Accuracy for the Resistance is generally very impressive, but some of the units have a low number of shots and I would love to run this card with Alexanders and Zhukovs - or a Thunderstorm!

CUNNING AMBUSH
A single squad may come out of Readiness on any board edge, or removed from the board and come on next turn from any board edge. Potentially HUGE - I'm thinking something big and powerful to have suddenly appear in the back lines - Zhukovs, a Thunderstorm?! Or perhaps something a little less impressive, but good for dealing with UCM and PHR gunlines - a squadron of Typhoons, Freeriders or even Flame Wagons. The possibilities are endless, great card.

SECRET ALLIANCE
Any Structure containing enemy troops suddenly finds itself joined by a base of Sirens! Who may immediately enter CQB! Fantastic card, and the one everyone comments on when they see it. Free troops are a rare thing in Dropzone, and Sirens are one of the most feared. Three of these lovely ladies jumping into your Home Objective is a nasty preposition, or could tip a bad combat back into your favour.

Overall, fantastic cards, and ones that need you to keep hold of your Espionage cards to make sure they come into play. The Tyrant has a solid Command Value, and should be able to draw at least some of these cards as the game progresses.
So there we are! A third Special Commander for the Resistance and another model completed. The road to a finished Resistance rolls on! Hopefully I can get a bit more done before the release of Dropfleet Commander...