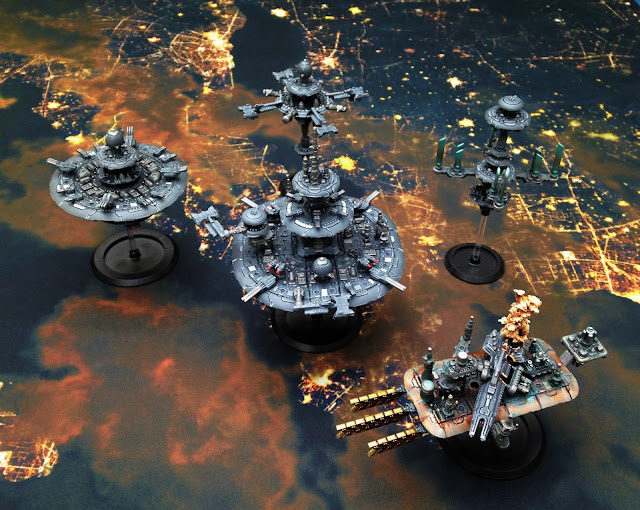 Space Stations are an important part of many scenarios in Dropfleet Commander, with one particular scenario requiring five of them! Fortunately, one of the best sets available for this game is the Modular Space Station kit, which is worth every penny, packed with bits and can easily build five or more stations.

I had built and painted one station some months previous, and used a LOT of the parts on other ships for conversions, but thought it was time to get the full five done - this way we could run the game without using any proxies or unpainted miniatures. I quickly assembled four new stations, and got to work!

Four of the stations were painted as military stations, in the traditional dull grey of my fleet. This matches nicely, but is a little dull when they are all together. The Repair Station was a nice break from the grey, and if I make more stations in the future I will make sure they are different colours. At the end you will see three smaller stations - these were produced by Games Workshop and have been salvaged from my ancient Battlefleet Gothic collection. They are from Forgeworld, and maintain their old white colour scheme from years past.