THE UNITED COLONIES OF MANKIND MUSTER THEIR DROPFLEET 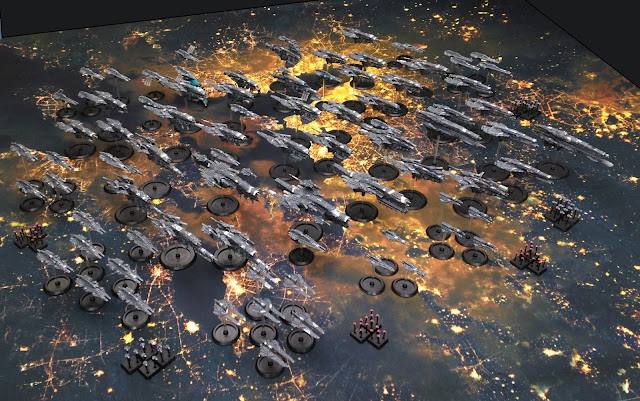 The culmination of over a year's work, I present Battlefleet Carthage in all its glory - featuring an extra handful of ships since the last posting of a fleet shot in October. Following the fleet shots, a picture of each squadron in turn, and some action shots. I do not intend to paint anything more for them until the Destroyers, Dreadnoughts and Monitors are released!

Now I have the UCM at a comfortable size (!!!), have a good number of Space Stations, civilian ships and 3-D debris fields done, I have no excuse not to start my Scourge fleet. I have more than enough ships for the Scourge fleet in the wake of the Kickstarter and the purchasing of a resin Battlecruiser, now I just need to work out a scheme I am happy with! First of all, however, I will be playing a few games and concentrating my painting efforts on Necromunda.

Of course, as far as the UCM are concerned, no project is truly ever finished, merely awaiting future avenues of expansion...