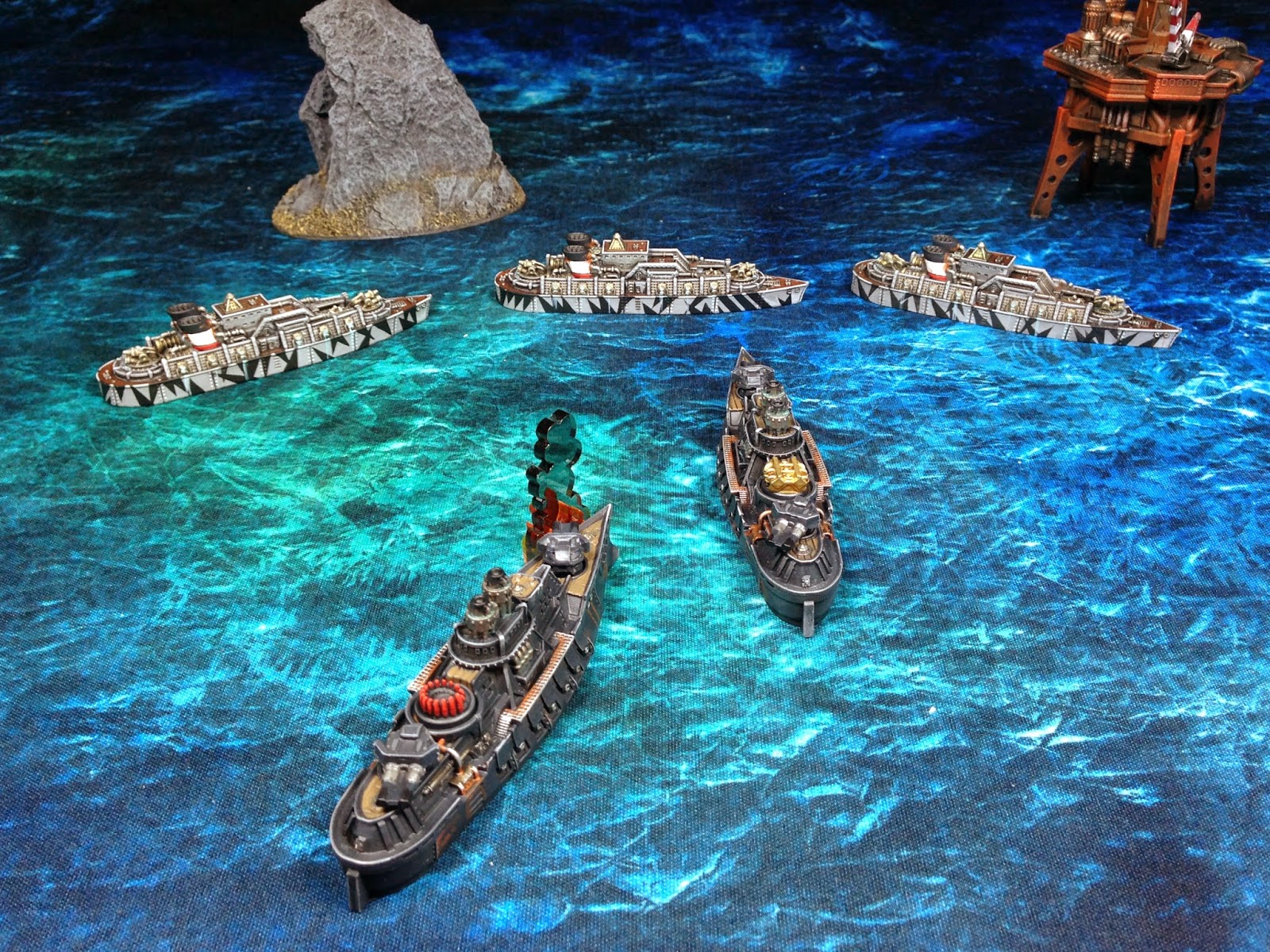 Welcome to the third instalment of the Greenland Campaign (check out Part One and Part Two if you haven't yet) and the entry of a new player to the game; an old gaming buddy called Mike. I play Mike every few weeks or so, against his variety of fleets and armies, and it is always a good fun game. You can see his Scythes of the Emperor Space Marines in a previous blog post facing off against my Raven Guard.

He rolled out his Prussian fleet for this game, featuring a colour scheme curiously similar to my own. I chose to deploy the infamous Black Wolf Mercenaries, to see how they would fare against another one of the Core Nations. Continuing the narrative of the Greenland Campaign, as you may have read above, I took the opportunity to progress the plot by having the Prussian Empire send reinforcements to Greenland, only to be betrayed and ambushed by the Black Company. Has their contract been bought out by the Grand Coalition? Or have they been employed by the ruthless Grunner, who is not eager to have a rival fleet commander enter his theatre?

ENDGAME
Prizing the Dreadnought left the Prussian fleet shattered, with only a few damaged Frigates and Destroyers remaining. In turn, the Black Company had suffered some major losses, with the destruction of both Manticores and one of the Nemesis-class Battlecruisers, but both the Death Bringer-class Submarines and most of the Corvettes were still operational.

In the end the Prussians had scored roughly 480pts, while the Black Company scored nearly 1200pts - quite a feat in a 1000pt game!

The trap may have been costlier than their last operation against the FSA, but the Black Company had still defeated their foe without too much trouble, capturing the enemy flagship to boot - a massive loss for the Prussian Empire and one they would not soon forget. I predict a game where the Prussians attempt to recapture the Sachsen in the future !

CONCLUSIONS AND LEARNING POINTS
When the Black Wolf Mercenaries were first released I theorised that they would struggle against a fleet with lots of Small squadrons; they had powerful weapons, but were limited in number and could be overwhelmed. This was the theory at least - this game showed that the Corvettes and the Reaper-class Attack Submarines can play a strong role in clearing out the chaff and letting the big guys concentrate on smashing the Medium and Large ships.

Nonetheless, the Prussians gave a good account for themselves, taking out three of the dangerous Black Company Mediums. Unfortunately, the two Submarines remained, and their incredible close range firepower was enough to smash the Dreadnought and leave it open for a series of Boarding Actions.

As the Black Company player for this game, as rude as it sounds, I did not feel especially challenged by the Prussian fleet. Even as they surrounded and overwhelmed the Manticores and the Nemesis, I knew that they had exhausted themselves to do it and not even touched the Death Bringers - the ships that in turn would crippled the Dreadnought and then flood it's decks with their elite mercenary fighters.

Once again, I find the Black Wolf Mercenaries a touch too powerful for the more traditional Core Nations to take on, and hope that the future brings an updated second edition and gives the original Core Nations some more power - for all I know, the Black Wolf Mercenaries were designed with this in mind and time will prove them to be a perfectly balanced and fun fleet to field. I hope so, as in their current iteration I doubt I will bring them to the table again.

THE NARRATIVE
Konteradmiral von Monts did not survive the attentions of the Black Company; he died with his Luftlancers in the defence of the Sachsen. With the rest of the Prussian fleet smashed, the Imperial Bond had been shown the new power in the Atlantic - the technology of the Covenant in the hands of the most dangerous and violent mercenaries yet seen in the World War were a threat to all.

The Sea Snake had another prize; this time far more important than a mere convoy of supplies and weapons - now he had a Dreadnought, and could barely contain his glee as the hulk was dragged back to Ammassalik for refit and repair. In turn Grunner had lost his vital reinforcements and discovered his former ally was now another enemy to add to the list.

The situation for the Prussian Empire on Greenland was getting increasingly tenuous, but Grunner, ever one for audacious declarations, swore that the Sachsen would be returned to Prussian hands through whatever means necessary...