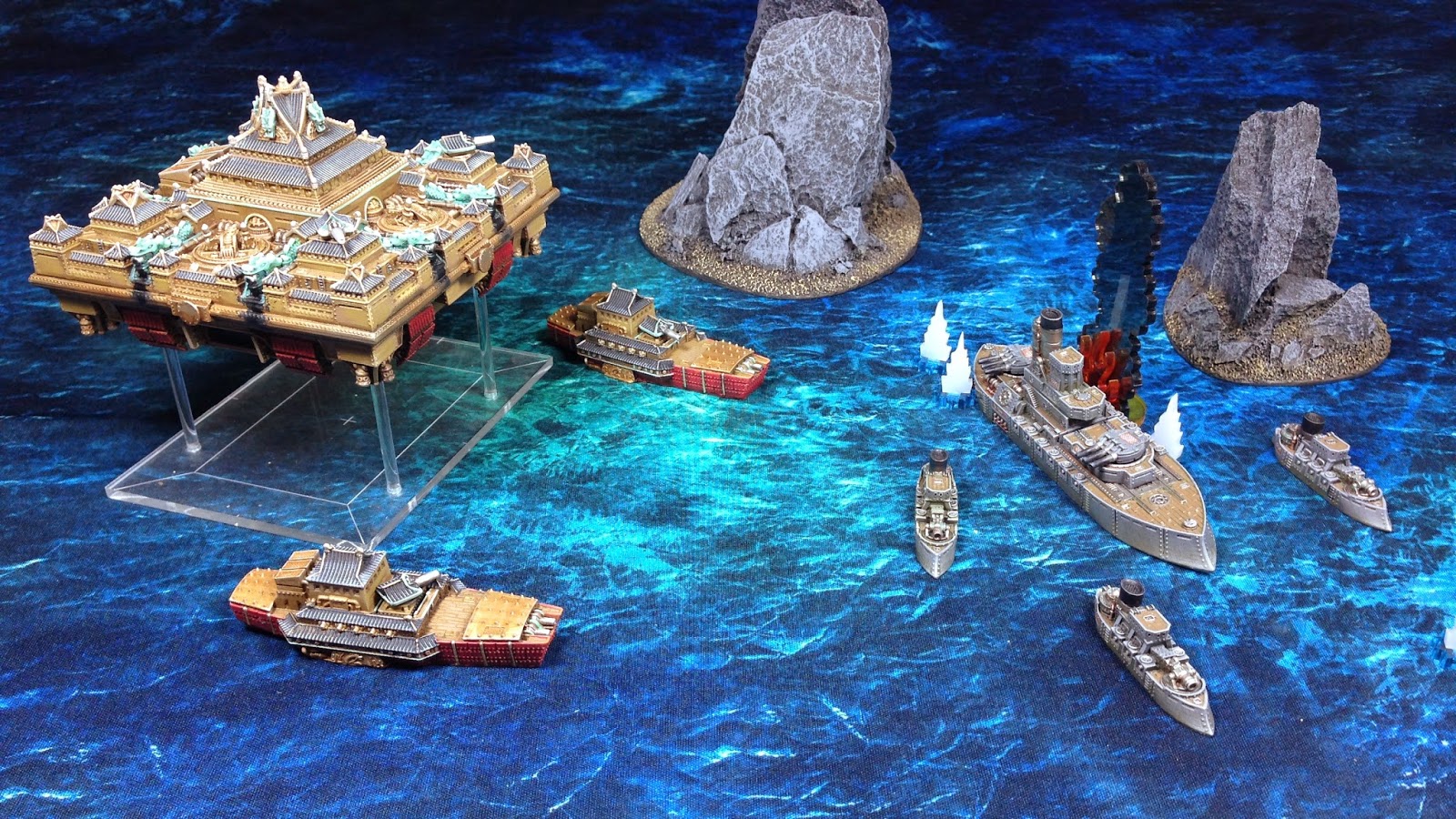 In Part One, I will talk about the things they share in common.

NATIONAL FLEET AND COMMODORE RULES
The Australian fleets are characterised by expensive and powerful ships, limited in number but powerful in their output. The ships are not busy with MARs like the Black Wolf Mercenaries or Ottoman Empire, but are simple and rugged, capable without resorting to bending the core rules of Dystopian Wars. Nonetheless, the fleets do have a couple of rules that help define them as no-nonsense fighters strong in shooting and close range Boarding Assaults.

Die Hard Crew
All the ships in the Australian fleets carry Die Hard Crew, a nice little MAR that helps the squadrons out with passing Morale tests. This is especially important given the limited size of the squadrons, but not game-breaking.

Experienced Engineers (Royal Australia)
Grand Coalition-aligned vessels are manned with the same engineering expertise as their overlords, giving them a bonus during the Repair phase that can be very helpful when faced with fleets that drop Critical effects like the Chinese. Not the most overwhelming rule in the game and perhaps not as useful in the early turns as the Inventive Scientists, but once your ship has suffered a few Raging Fires you'll be glad it's there.

Inventive Scientists (Free Australia)
Learning from their Covenant allies, the ships of Free Australia feature Inventive Scientists that can give them a re-roll when using their Generators - especially useful for the Pocket Battleships and their Shield Generators but also good for the Gunships and their Tesla Generators. As with the Experienced Engineers, this is not an overtly powerful rule but helpful and characterful.

Forced Compliance
The National Commodore rule everyone fears, Forced Compliance can bring an enemy vessel into the Australian player's control with a successful Boarding Assault. Nothing quite beats the horror of your own Dreadnought suddenly turning its guns on your fleet. Unfortunately, this has not been a common occurrence in my games.

The problem with this rule is the timing of the Boarding and Prizing - often I do not initiate the Boarding Assault until the third turn, by which time the rest of the fleet has done enough damage that Capturing a major enemy vessel will end the game due to Victory Points etc. In addition, I do not want to use Forced Compliance on anything less than a Large vessel - and Capturing these ships is often difficult without some serious planning.

One the most important things to remember with Forced Compliance is to do the Boarding Assault late in the turn - this way, you can start the next turn with your new acquisition before your opponent has a chance to recapture or blow it up. In many games, I have held boarding squadrons back while knocking off vital HP and lowering their defensive auxiliary statistics, ready for the last activation of the turn to swoop in and Capture it.

The Crocodile-class Assault Submarines, combined with Dash & Elan from a nearby Pocket Battleship, are the best bet. Since I started playing with the Australians, I have managed to force Compliance and go on to use a Russian Dreadnought, Russian Ice Breaker and a Prussian Battlecruiser, which is not a great tally considering how many games I have played. In the majority of cases, I have Captured a vessel and then the game has ended, or my opponent has managed to Recapture/Sink the vessel.

Overall? Cool rule, but you'll be hard pressed to pull it off in small games, unless you want to Force Compliance on a Medium. The loss of a Large will often see the end of the game anyway. If you do have a good plan for taking control of their Dreadnought, do it late in the turn and make sure you can support your new vessel - you don't want to lose it again straight away!

PROTECTOR-CLASS ESCORT FRIGATES
In a fleet with powerful ships like the Pocket Battleship and the Victoria-class Gunship, the Protector can seem somewhat average. With a Primary turret, this Frigate may seem a little weaker in RB1 than other Smalls, while the broadsides are nice but cannot link with the turret. Despite this, the sheer amount of firepower is great - 4/4 on the broadside is one of the strongest for any Small, and the turret still packs a punch in RB3. At 25pts each, I think a couple of squadrons of Protectors is a fine investment.
With 2 AP, the Protector can work well with Dash & Elan by sticking close to the Battleships, but for most games I prefer to have the Frigates run the flanks and pick on weaker, outlying vessels. Later in the game, a surprise Boarding Assault can be powerful, especially if the Crocodiles have been doing their magic.

Overall the Protector is a nice and simple frigate and also works very well as an Escort, doing either job well.

VICTORIA-CLASS GUNSHIPS
Forgetting all the other distractions and powerful tools available to the Australian player, the Victoria-class Gunship is the vessel that causes the most controversy. The ship itself is pretty standard, with a high CR of 7 and 5HP but no other defences and just a simple Tesla Generator to help it with an average movement of 7". The high points value is explained when one looks at the Battle Cannon, it's main armament.

With an unusual spread of firepower that gets better in RB2, the Victoria is a ship that needs to move into the sweet spot and then slow down so it can stay there. When it's there though, the combined fire of two Gunships can critical a double-shielded Dreadnought - 19AD with Devastating Ordnance - ouch!
Almost a one-trick pony, two squadrons of Victoria Gunships can run a great one-two punch attack to utterly destroy a Medium squadron or take a Large out of the game. The only caveat is the Fixed Channel of their Cannon - this is something to remember and also a good use for the Tesla Generator. The extra D3" movement can really help with final positioning and angling.

The Cannon almost speaks for itself. Learn to position and angle the Victoria, don't get too close, and roll those exploding sixes!

Beyond this, the Victoria carries a solid broadside of 6/6, and a good crew count of 5, which is always something nice to remember when the opponent sends some Small vessels to distract them. I always run two squadrons of Gunships and keep them close to the Battleships to benefit from the Guardian Generator. They take a lot of attention from the rest of the fleet, and are undoubtedly worth the points - just beware having them Prized!

AERIAL SUPPORT
The Kestrel, Osprey and Merlin
I have not had a great deal of experience with the aerial aspect of the fleet - aside from the Osprey, I have not used any of them yet. This is partly because the 1000pt Naval Battle Group is a tight and efficient fleet that I like to use together, but also because I really, really do not like the look of the Britannian War Rotors.

For the Osprey, I use a converted Forbes-class Support Blimp from the East India Merchant Company range, featuring two Australian turrets. The upgraded turrets make these flyers a lot better than their Kingdom of Britannia equivalents, to the point where I have heard of Britannian players allying in Australians rather than using their own. 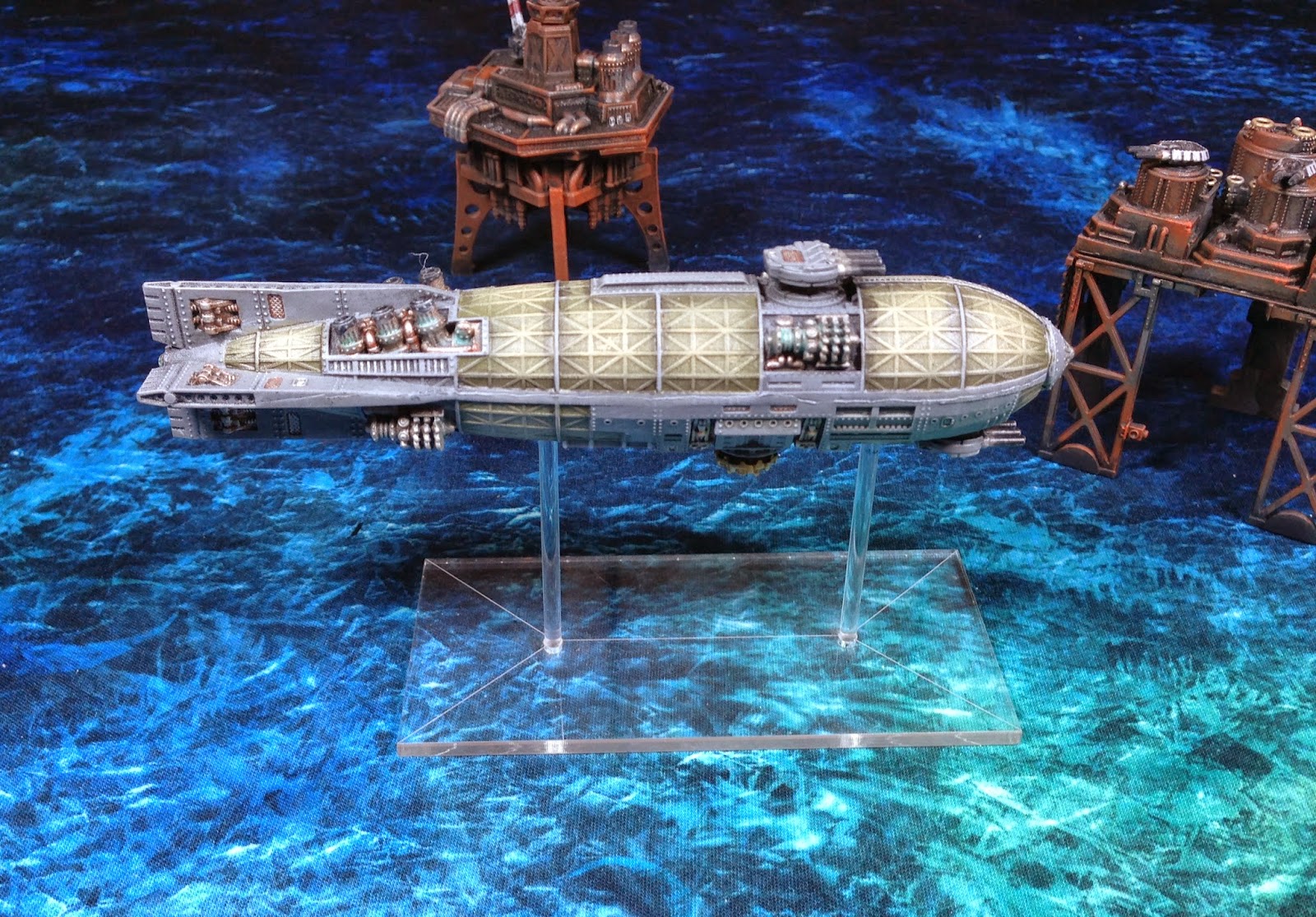 For larger games beyond the 1000pt box set, I think adding an Osprey-class War Rotor or squadron of Kestrels would be a fantastic addition. The Osprey brings a Guardian Generator and Devastating Ordnance, and while all of these ships are expensive points wise, they pack a punch. For the financially equipped, I can see the appeal of another squadron of Victoria Gunships or Pocket Battleships being more attractive.

Spartan do a great set for adding a full armada to your collection, the Kingdom of Britannia Aerial Battle Group - 585pts of mayhem. Don't forget a set of the Australian turrets to make the conversion complete!

You can of course run a Landing Field to boost the numbers, but when points are tight...

Mercenary Carriers
The Apollo-class Support Carriers are a nice addition if you can afford it, bringing a wing of four tokens each. A single ship could be attached to a Medium squadron or two can be taken as their own squadron. Whether they are better than a Landing Field is a matter for debate - the Field comes with less tokens than a pair, but costs 30pts less and has a weapons emplacement. Personally, I prefer the Carriers as using a static construction feels wrong to me outside of a special scenario.