POCKET BATTLESHIPS
Dystopian Wars' first Large squadron, the Pocket Battleships bring big firepower at a bargain price. Crucially for the Australian fleet, they bring support in form of their Convertible Generators and the Combat Coordinator: Dash & Elan, making them a wise investment for a player of either allegiance.

A reasonable cost in points, I can fully understand those players who work with four of these, and would always want to run at least a pair in anything above 750pts. Together, they have solid auxiliary statistics and can defend each other from torpedoes/rockets nicely. A tough nut to crack, even without Escorts!

Personally, I have always taken a Convertible Generator, and would find it difficult to say the Kinetic/Tesla is better. It could be useful for moving up the field for some Boarding and using Combat Coordinator, but as the fleet tends to have similar movement values and the Pocket Battleship is not particularly slow (8" movement), I think the Convertible Generator is superior.

I always use mine open, to help defend the Victoria-class Gunships and the Submarine Tenders. Being Vulnerable has never caused me major issues - to be honest most people are more concerned with destroying the Gunships and the Assault Submarines first, leaving the Battleships untouched. By the time they start targeting the Battleships, it's usually too late for them. 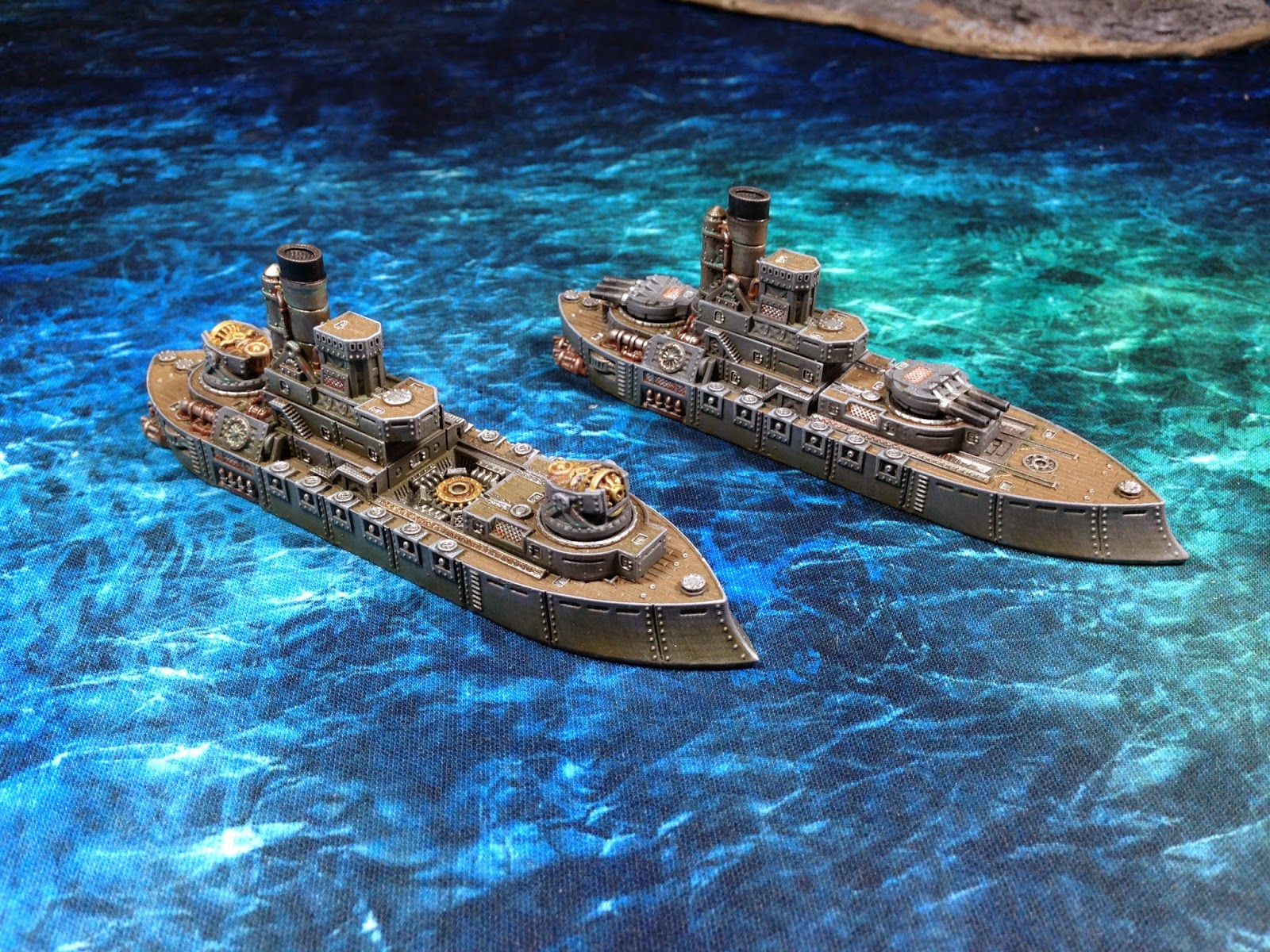 CERBERUS-CLASS POCKET BATTLESHIP (Royal Australia)
The Cerberus is a great Battleship, with a very healthy broadside of 8/8 and two rather excellent Main Turrets. 11/9/6/- each with Devastating Ordnance, the Turrets can blow most things out of the water without too much trouble on their own... let alone four of them. A pair of these sit nicely in the centre of the fleet, turning in the second or third turn to present a powerful broadside that will decimate the enemy fleet. With good positioning, they should be in the perfect place to lend Dash & Elan across the fleet and protect the smaller elements with their Guardian Generator. 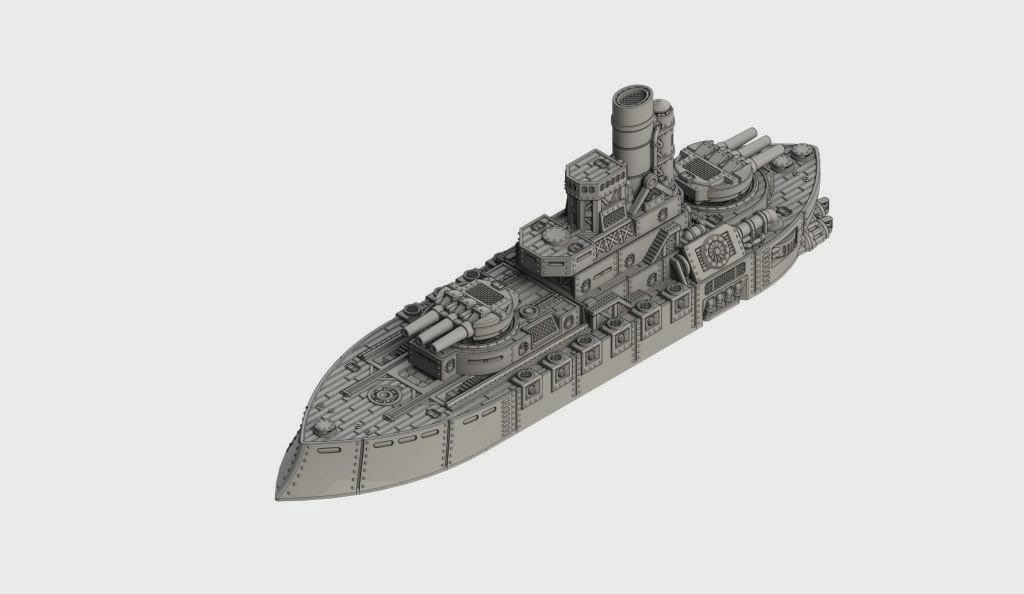 BOUNTY-CLASS POCKET BATTLESHIP (Free Australia)
Slightly less offensive in the short range, the Bounty brings a pair of strong (Redoubtable!) Energy Turrets to the table, giving the Free Australians a powerful firebase that can threaten anything within the four Range Bands.

The long range capabilities of the Bounty make me play the Free Australians in a very different style, with the Submarine Tenders and the Battleships hanging at the back of the board and letting the opposing fleet come to me. The Gunships and Frigates sit on the flanks getting into their ideal Range Bands (but ideally still within range of the Guardian Generator), while the Assault Submarines wait patiently for a prime target to make itself vulnerable - quite often, they don't even need the Dash & Elan of the Battleships to help them Capture an enemy vessel and can jump ahead.

In this manner, the Bounty is less aggressive than the Cerberus but still works in the centre of the fleet, supporting and protecting everything around it and throwing a large amount of Energy Turret dice at any target it pleases. I like to run them as pair as I commonly face Dreadnoughts and Russians, where that early critical is vital and I need all four Energy Turrets linked together, but I can easily see the value in running them alone. 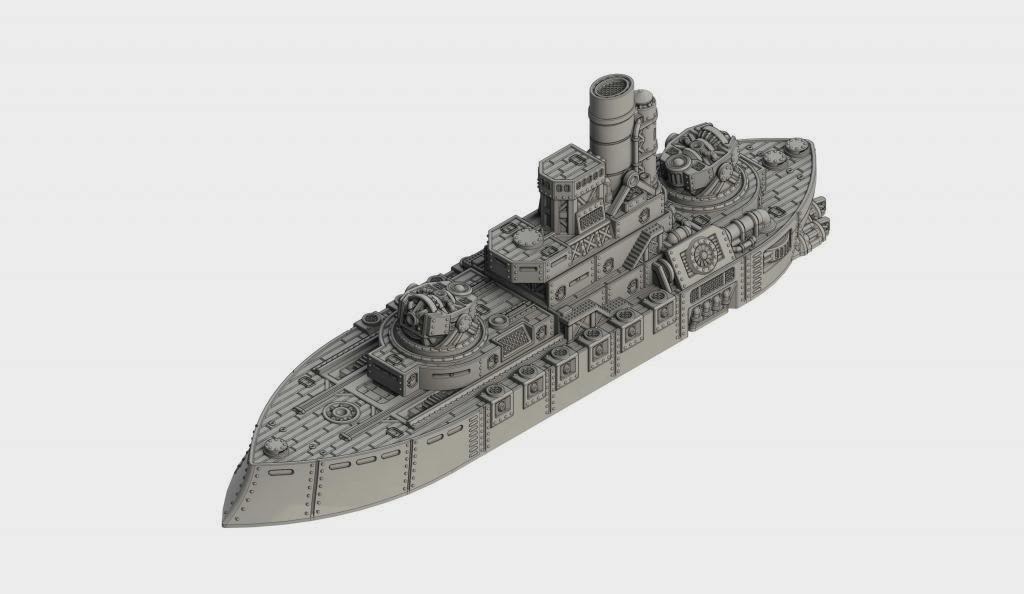 SUBMARINE TENDERS
Plodding along with their high cost and limited weaponry, the Submarine Tenders may not appear to be the most exciting vessels... and they're not. They are, however, immensely useful support vessels and they crucially bring the Crocodile-class Assault Submarines to the table. These are not the ships that will critical the enemy Dreadnought and win the game, but in both iterations of the Australian fleet I would be loathe not to take a pair of them. 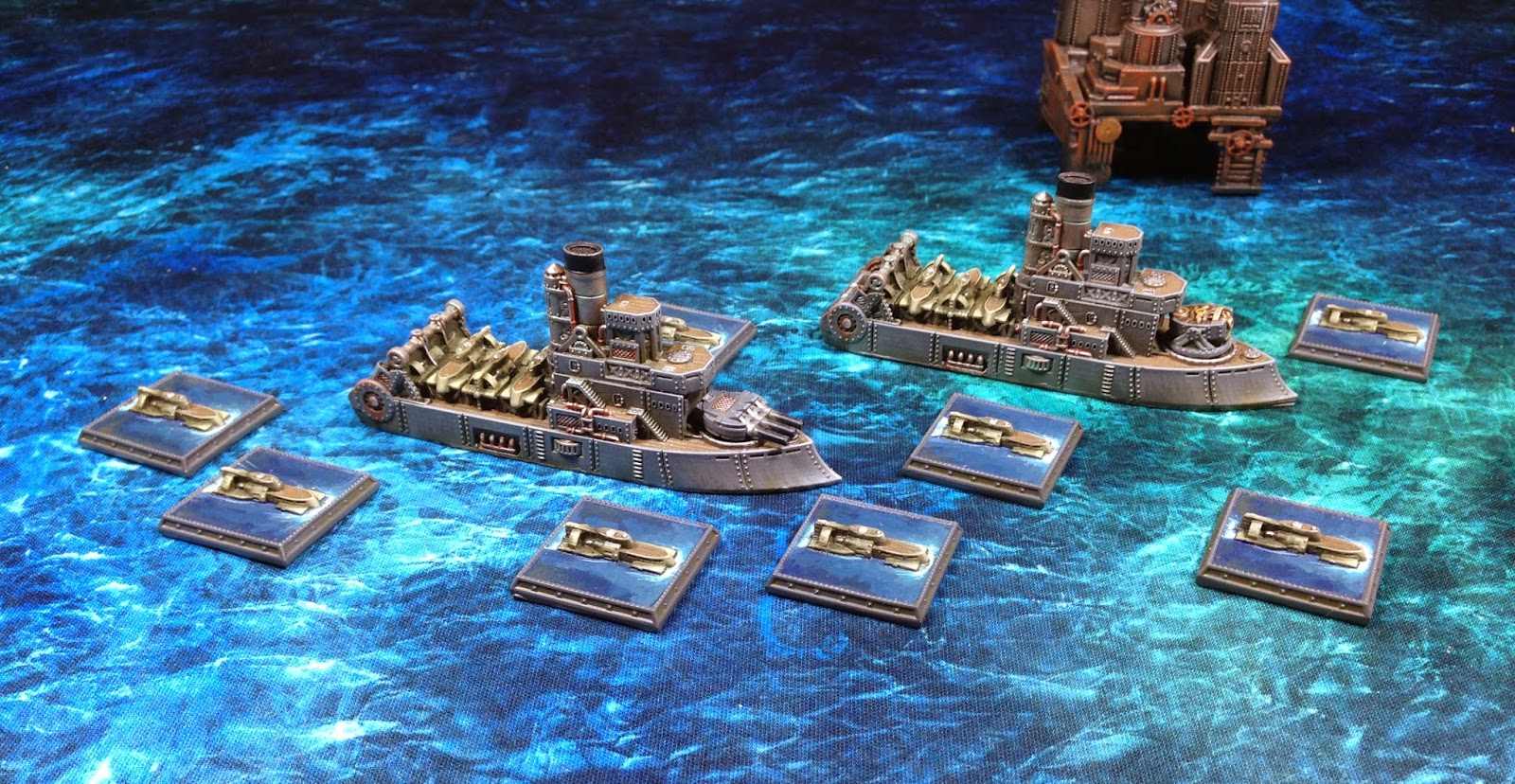 TASMANIA-CLASS SUBMARINE TENDER (Royal Australia)
Offensively, the Tasmania brings a nice Main Turret, which as a pair can link for 13/10/7/-, very powerful indeed when you consider the Devastating Ordnance. Lacking any other weapons, I prefer to keep these guys nearby or behind the larger ships, as their high cost makes them a valuable target for the opponent. 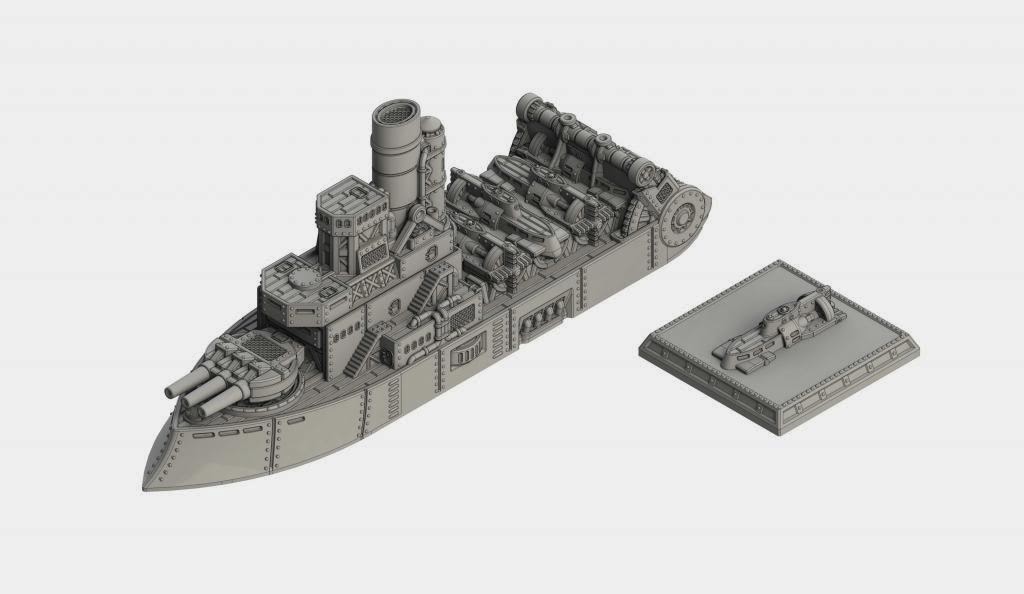 SIRIUS-CLASS SUBMARINE TENDER (Free Australia)
The Energy Turret of the Sirius weighs in at 6/6/6/6, which as a pair links to 9 and can seriously threaten most Medium vessels in the game. Fired individually, they could be good for trying to take out some Smalls, but watch out for Small Target. I prefer to use these ships at the back of the fleet, quietly picking off damaged ships from RB4. Their job of bringing the Crocodiles to the table is complete in deployment, and their Energy Turrets mean they don't have to move much to remain full effective. As with their Royal equivalents, they are expensive and should be protected - screen them from enemy shooting and boarding with the Protectors, and perhaps a Guardian Generator from the Bounty. 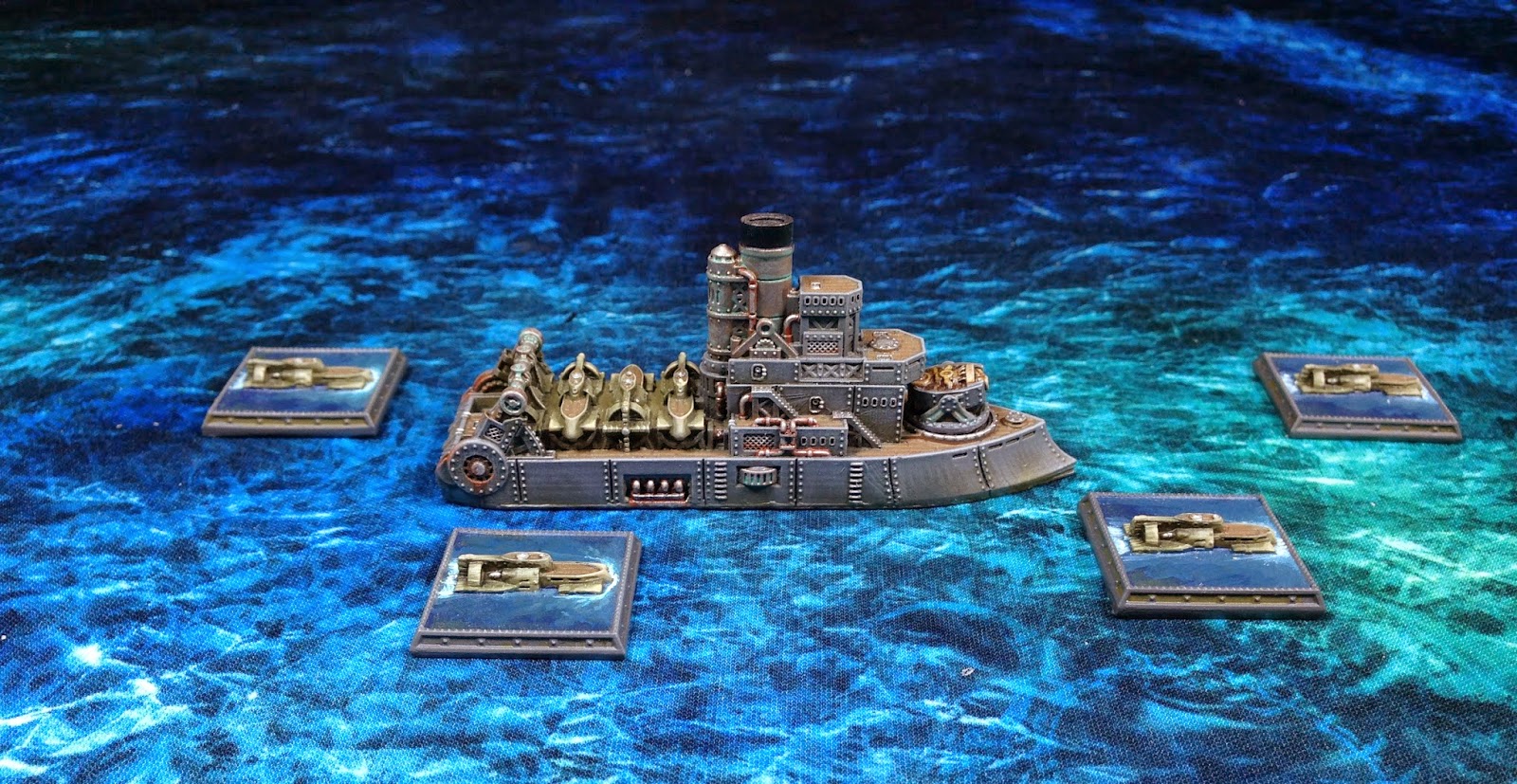 CROCODILE-CLASS ASSAULT SUBMARINES
The real reason for the high cost of the Submarine Tenders, the Crocodiles bring some serious Boarding potential to the Australian fleets. With Ferocious and being a Diving model, a squadron of the Crocodiles is incredibly difficult to stop, and even if only a few of them make it through to board an enemy vessel, they will cause a lot of trouble. Combine with the Dash & Elan from the Pocket Battleships and they become unstoppable.

Given the way Boarding works in the current edition of Dystopian Wars, the eight different targets a full squadron of Crocodiles presents will be very, very difficult to stop, and almost every time I have successfully Prized an enemy vessel it has been with the Crocodiles. With a movement value of 12", anything within two Range Bands is under threat.

I like to have the Crocodiles wait under the water for the first couple of turns, hiding somewhere near the middle where the Pocket Battleships can easily lend their Combat Coordinator.Then, as the last Activation of Turn Three (or Turn Two, depending on how close the enemy fleet is), the squadron will launch forward and overwhelm the defenders, hopefully Capturing the target vessel ready for some Forced Compliance shenanigans the next turn. More on Forced Compliance in the first article.

Overall, Crocodiles are a great little squadron and really add some piratical flavour to the Australian fleet. If they get taken out early and achieve nothing, it's not a huge deal for the fleet - they already have great firepower and strong crews of their own to help carry the game. Never forget, your opponent will be worrying about Forced Compliance, and the position of the Crocodiles can influence their deployment or movement even if they never achieve a Prize. 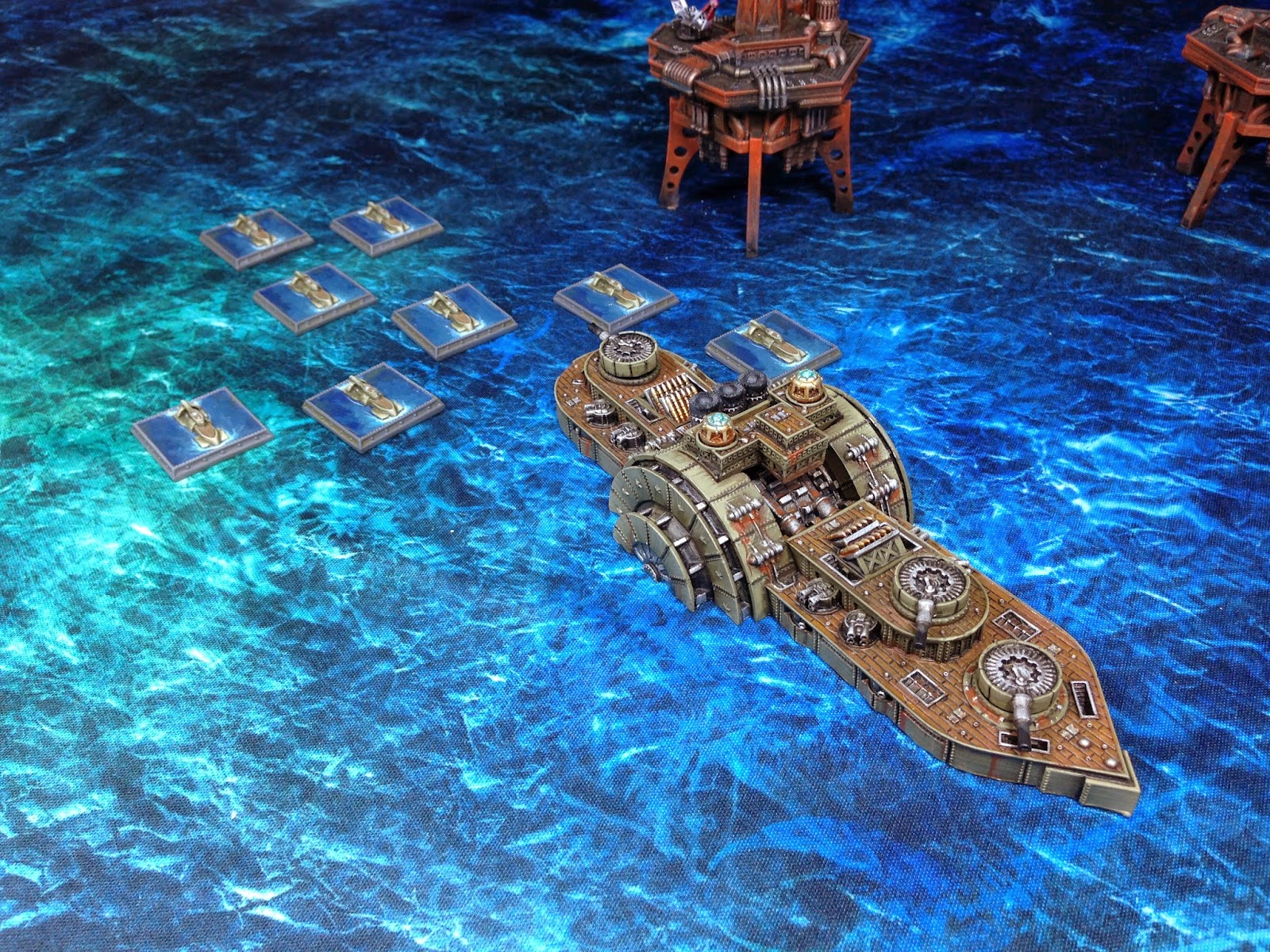 CONCLUSIONS
When the Australians were first released, many in my gaming group considered them overpowered. My first few games were brutal, and to be fair, I don't think I have lost a single game with them yet. Nonetheless, in the days of updated fleet lists, Black Wolf Mercenaries and mercenaries all over the place, I think the Australians have stepped down from being considered "broken", yet maintained their strength.

An ideal Australian fleet, I feel, comes straight out of the box. The Battleships sit in the centre, supporting the fleet, the Tenders hide at the back while their Assault Submarines lurk underwater, waiting for a target. The Frigates skirt the flanks and hunt vulnerable targets, while the Gunships take on the big targets with their immense Battle Cannons. At bigger points values, add some air power or invest in a second boxset and get either more Gunships or more Battleships! I think this vague overview is pretty accurate for both the Free and Royal Australians.

Of the two fleet lists, I have the most experience with the Free Australians. Many of my friends play Grand Coalition fleets, so I wanted to maintain a semblance of narrative by using them as Imperial Bond mercenaries. The fleet has always been fun to play, a lot more forgiving than my usual Prussian fleet but ultimately enjoyable with lots to consider in all areas of the game - movement, shooting and boarding.

The Royal Australians are considered by some to be the better of the two fleets in terms of raw firepower, and I cannot disagree. In an aggressive shooting match, the extra dice and Devastating Ordnance the Royal Australians bring to the table would probably tip any match-up in their favour. Their Experienced Engineers also help a great deal with the threat of Corrosion and Raging Fires that fleets like the Ottoman Empire and Chinese Federation bring to the table.

As Allies, the Royals add brutal firepower and boarding potential to any Grand Coalition fleet, while the Imperial Bond get some nice long-range Energy Turrets. The Antarcticans get a great boost for their close range potential, and I look forward to using them with a Covenant force currently in the works.

Ultimately, I think both iterations are more than valid and have great experience using both. Best of all, their playstyle is similar but with some striking differences, which makes the investment even more rewarding. They are a solid and simple yet interesting fleet to play with, and I heartily recommend both buying and magnetising these models! I look forward to any further naval expansions Spartan bring for the Australians - there are still many classifications that have not been used, or other, stranger avenues for the designers to investigate. 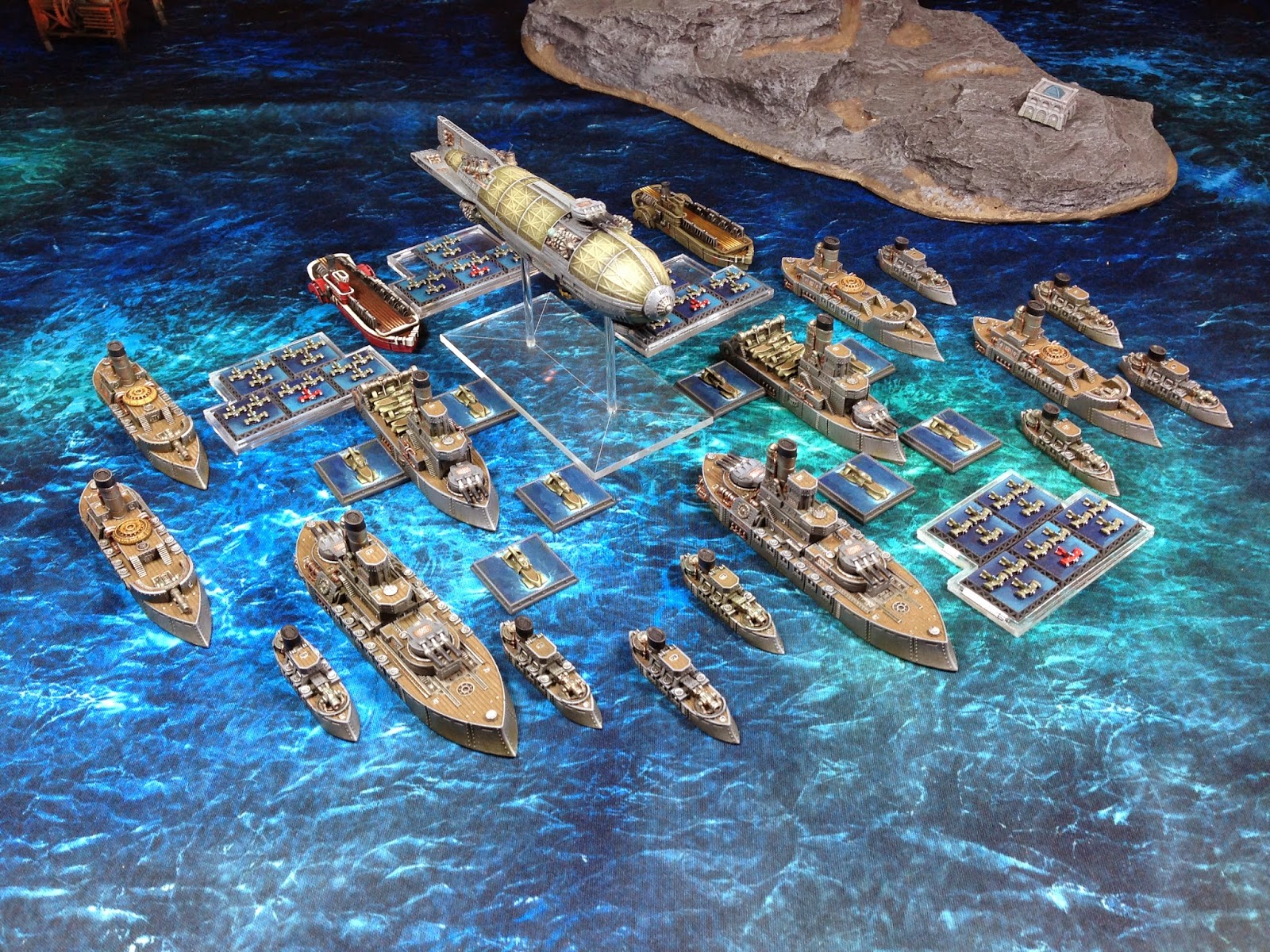