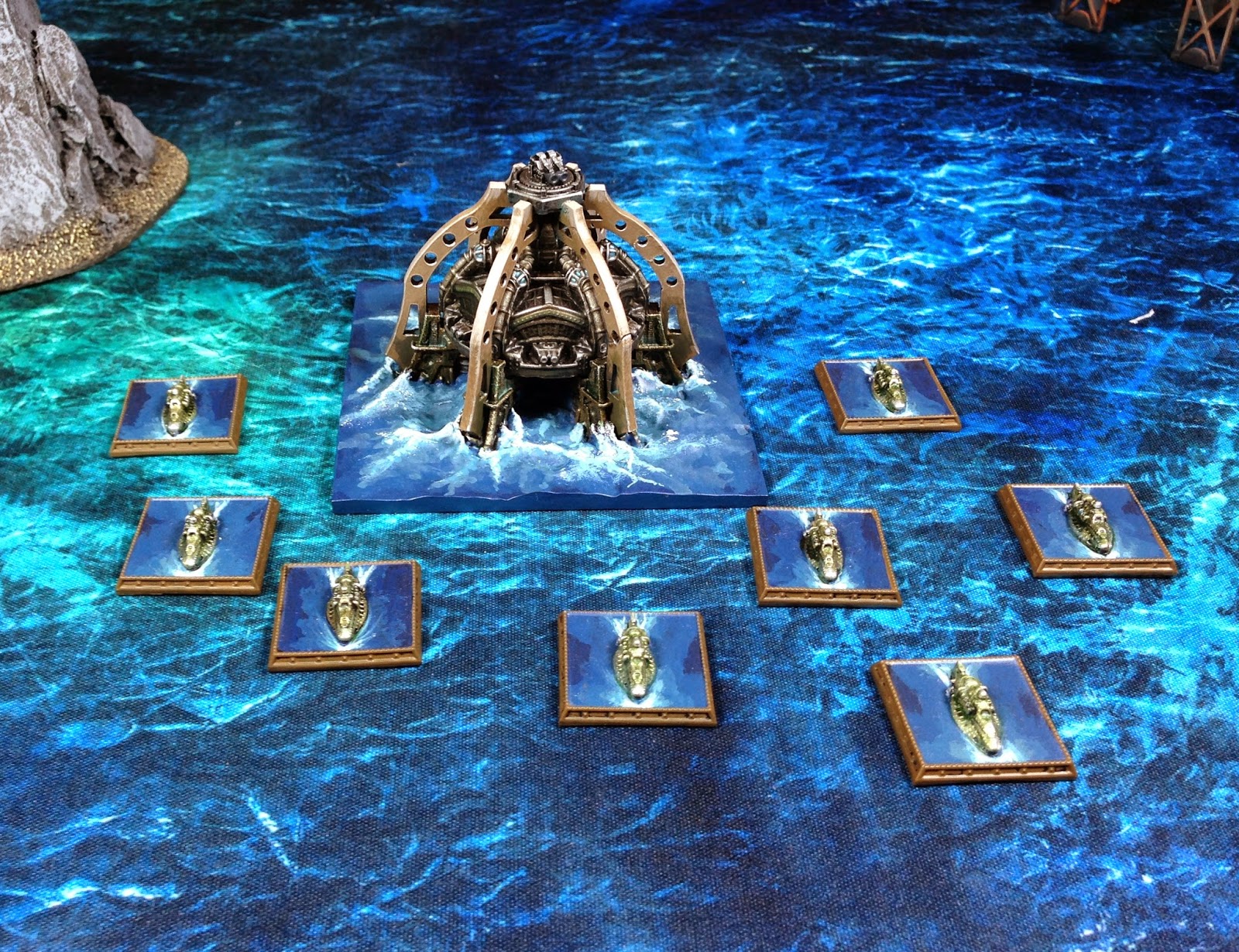 
The blue for the sea is painted with four Citadel colours, blended together so one leads to another over five, six or more stages depending on the size of the model and how much effort you wish to put in. This is done in streaks on those models that wish to imitate movement, and around the "shallow" areas for permanent fixtures like the Fortifications and platforms. The pure white of the final stage is not painted in the same manner to represent the breaking of the waves, using different methods that will be discussed below.

The colours chosen start with a very dark blue and move up into turquoise - using a simple light blue would look rather odd! Citadel have a very nice selection of blues, teals and turquoises, but I'm sure most different paint ranges have their own useful equivalents.

For models in motion, it is important to remember where the model would be breaking the waves - the prow, the engines, any protuberances or sharp edges. These are the points where the white of the surf would be painted - I do not favour surrounding the entire model in white surf (regardless of how accurate it may be) as the look of the model can be overwhelmed and the eye drawn away from the key features. 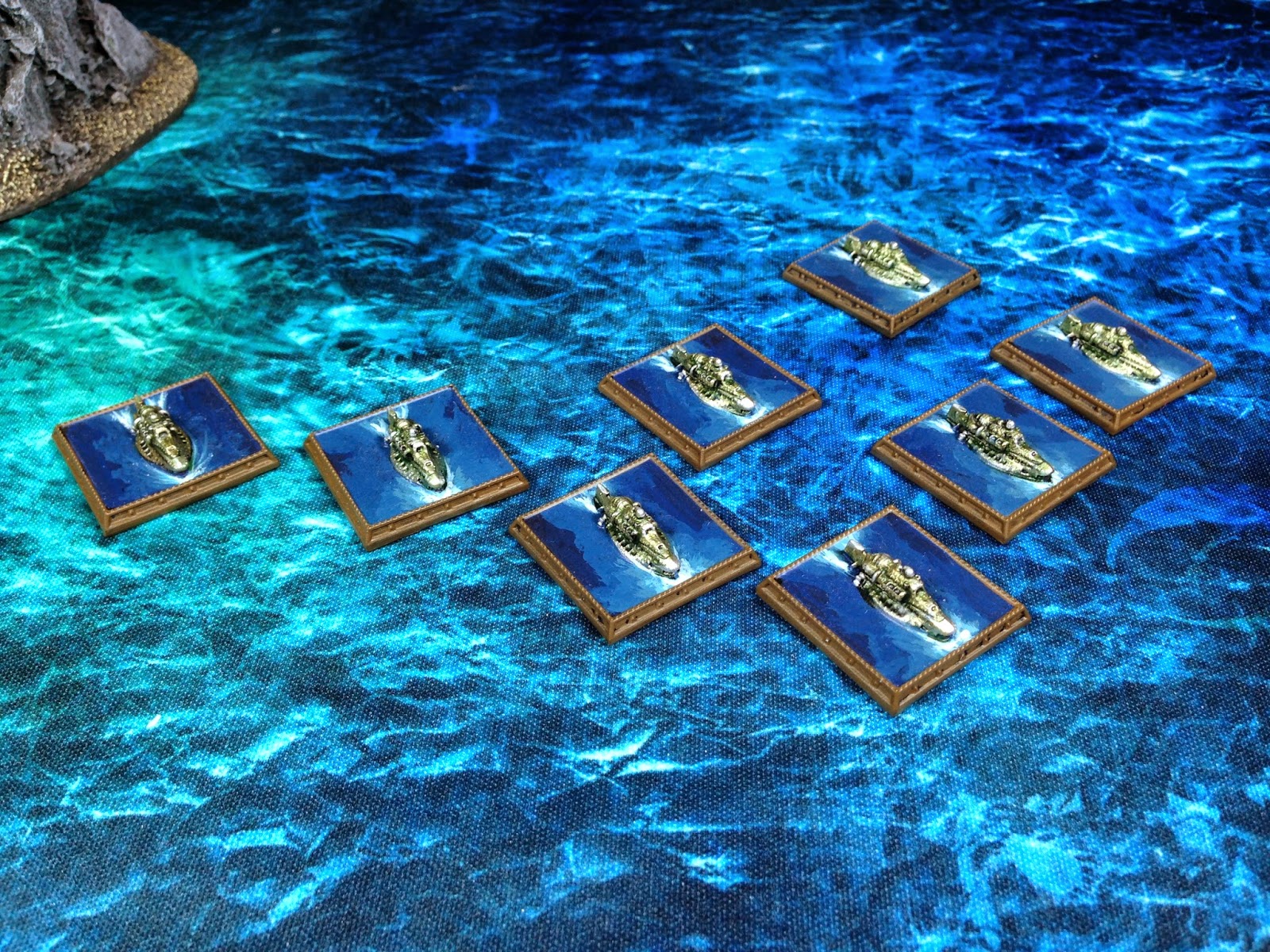 THE TECHNIQUES
Blending is not something I am going to discuss in detail without some stage by stage pictures, but needless to say you paint the area you want to look highlighted in increasing small areas, in streaks running away from the prow of the model for a ship in motion, or dabbing around areas where waves are crashing or being mixed up, such as around the engines of a large vessel or the struts of an ocean platform.

The biggest stages of the blending use the Thunderhawk Blue, with the light Temple Guard Blue used sparingly, and the White Scar eve less. Remember these ships may be large, but the ocean is immeasurable in comparison - keep it looking dark.


Dabbing and Stippling is the technique used for the final highlight of pure white, to simulate the surf of the broken ocean. On small models, this is done carefully in small patches. Less is more!

On the large models, I use a torn up sponge (usually taken from blister packaging) stippled around the areas I think the waves would be broken - again, any sharp edges, the prow of the ship or against the struts of fixed platforms. Follow the lines given to you by the sculptor and just dab down the ridges. Using a sponge can give a nicely random pattern, with random spots of white in areas you may not have originally planned. This can look great, but watch out for using it too much - it can quite quickly become unrealistic or overwhelming. 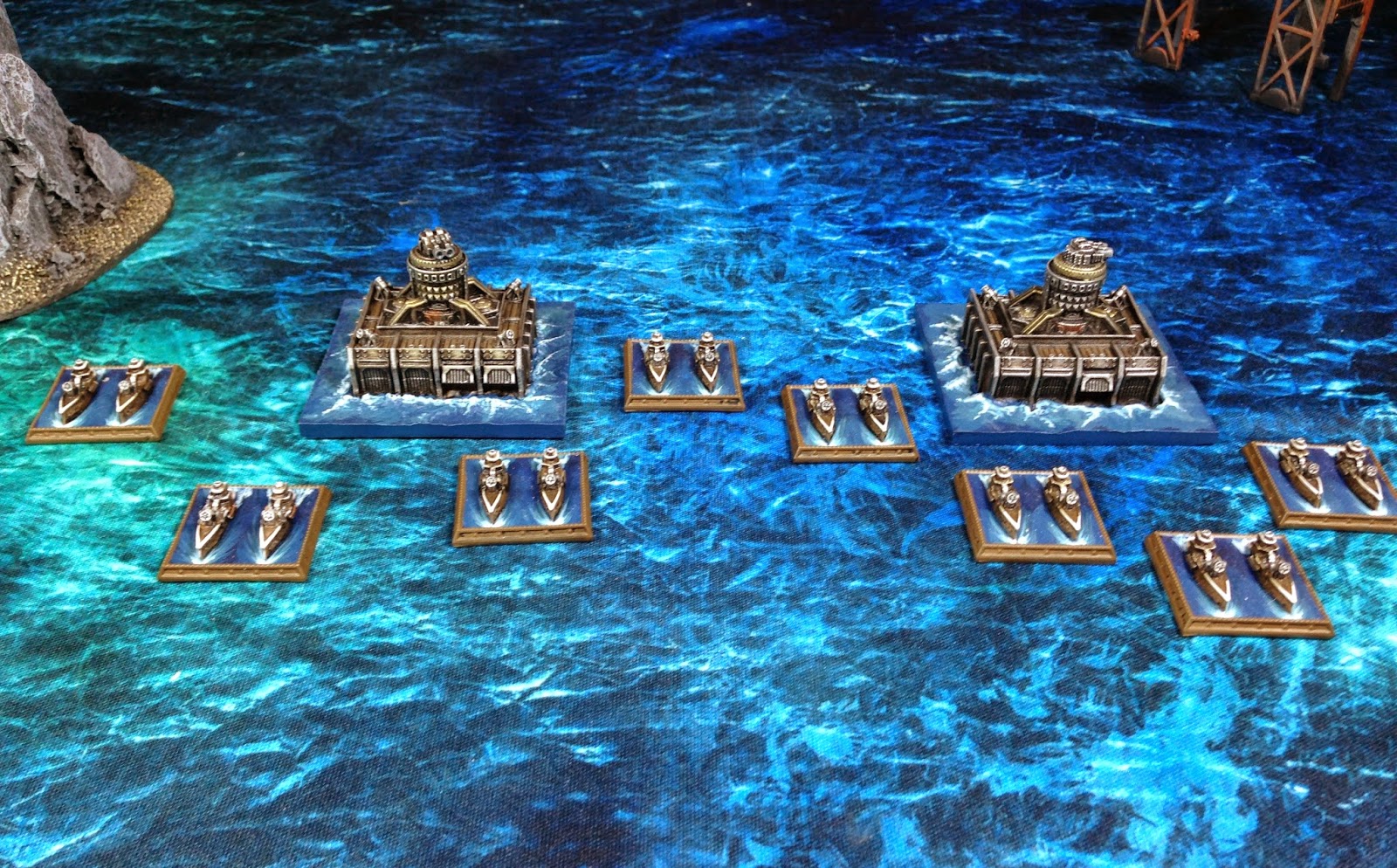 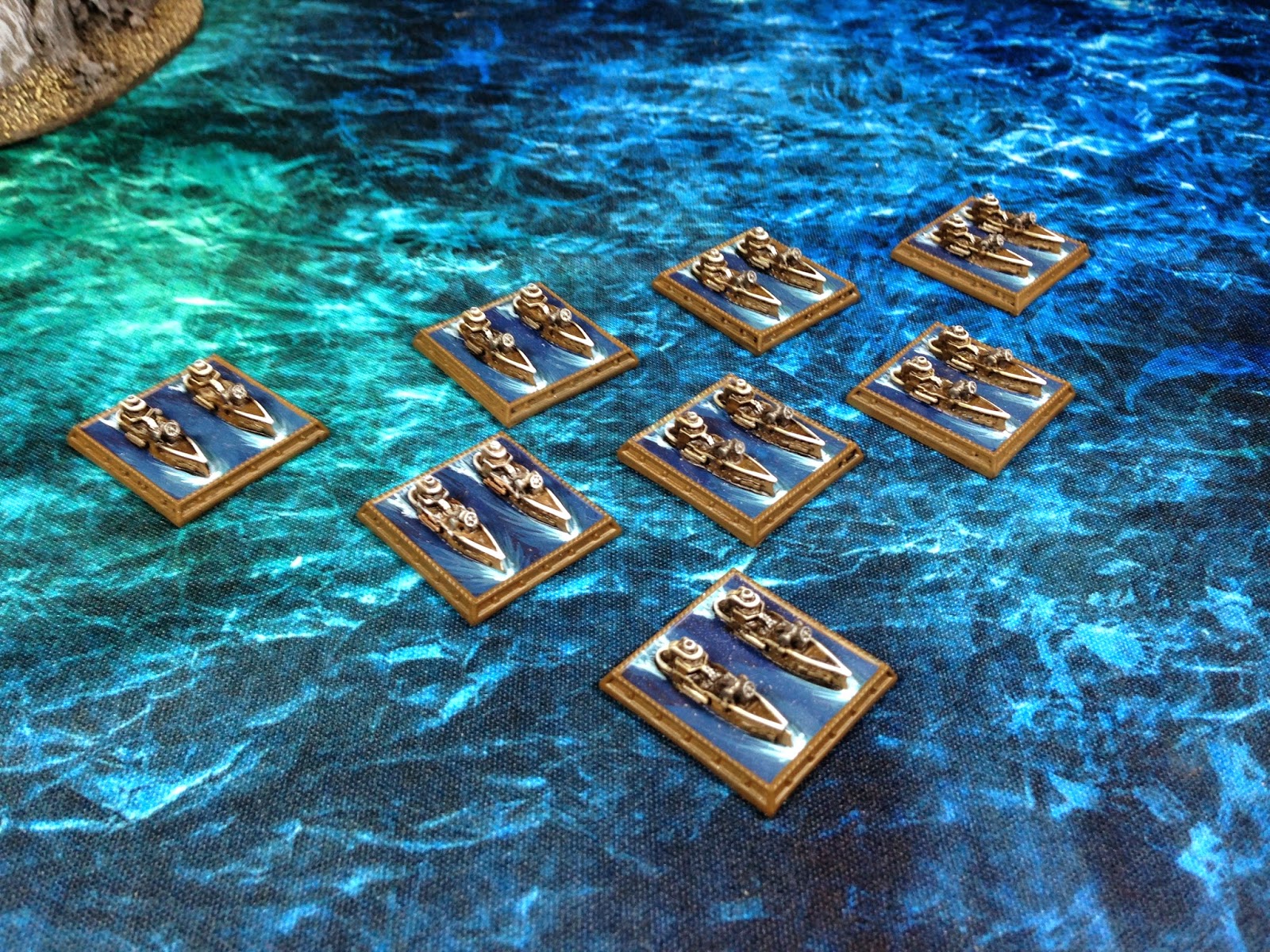 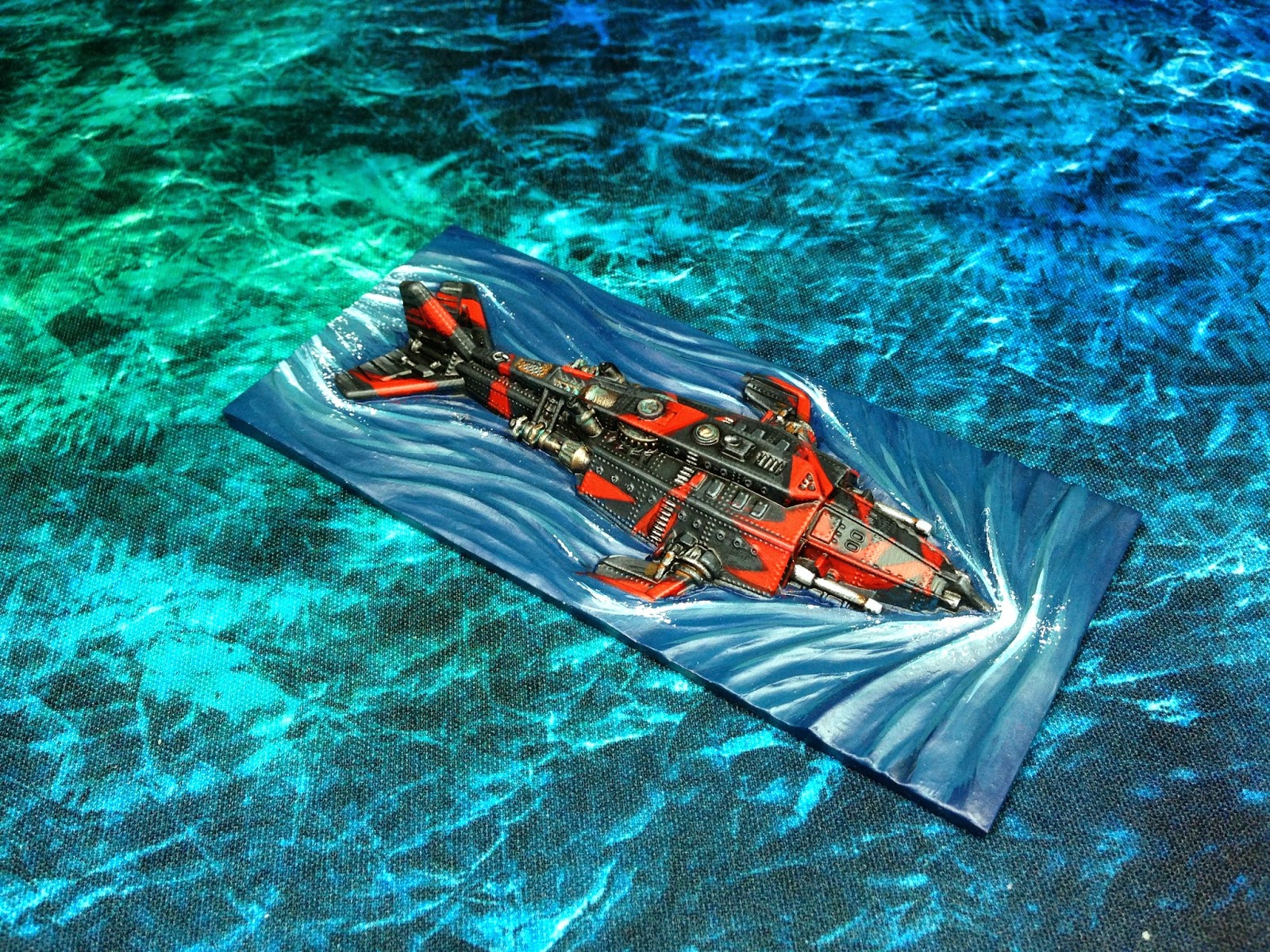 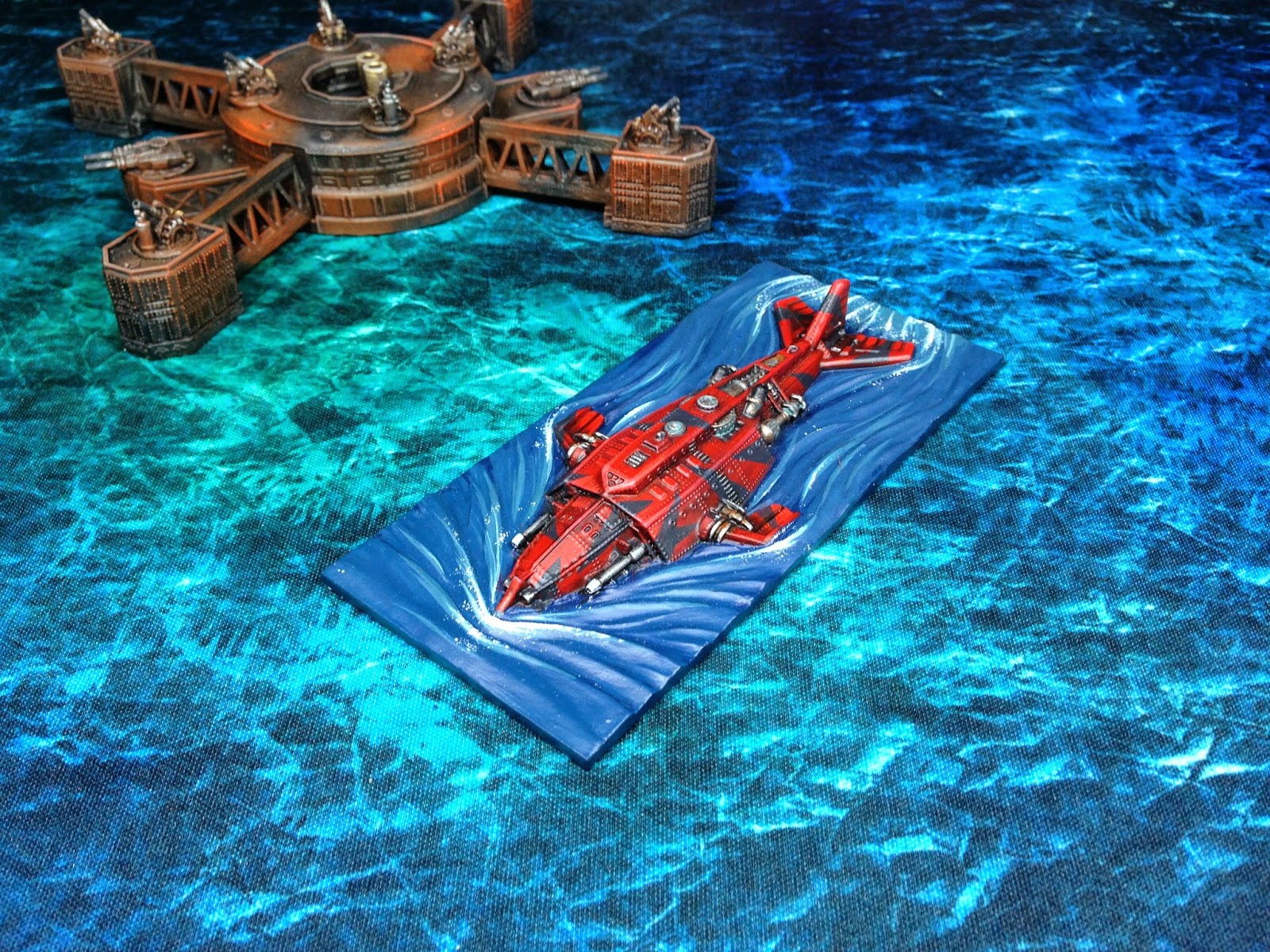 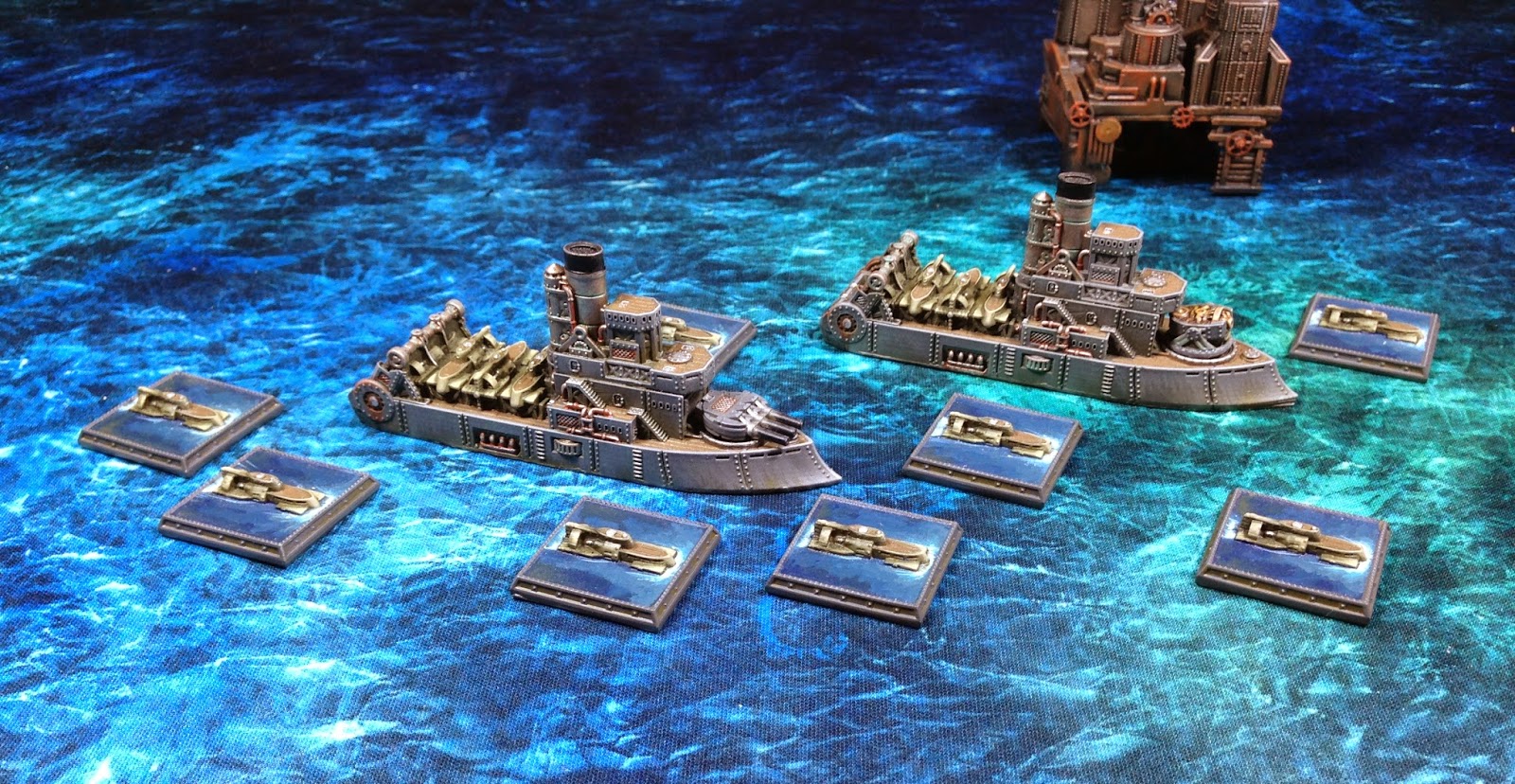 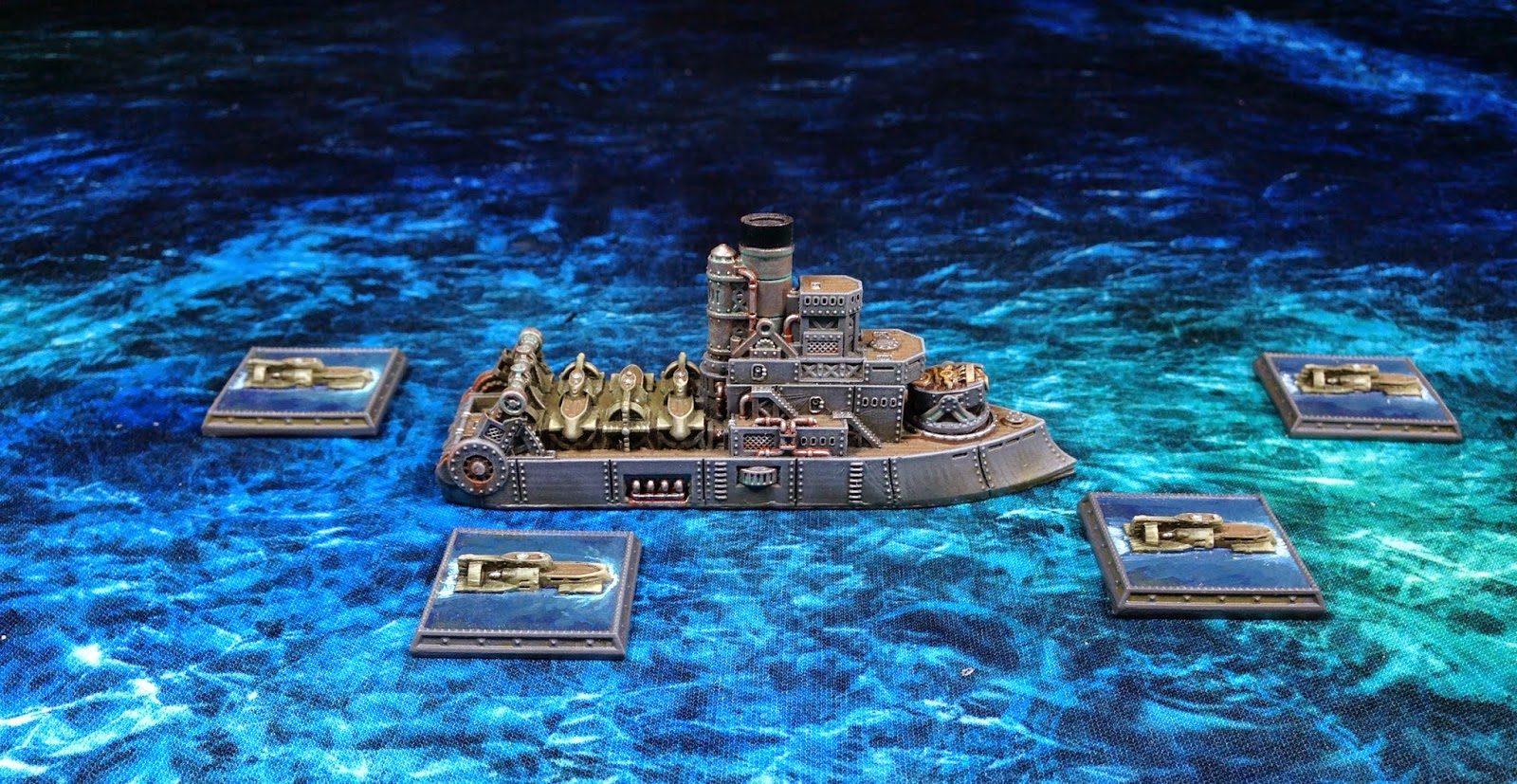 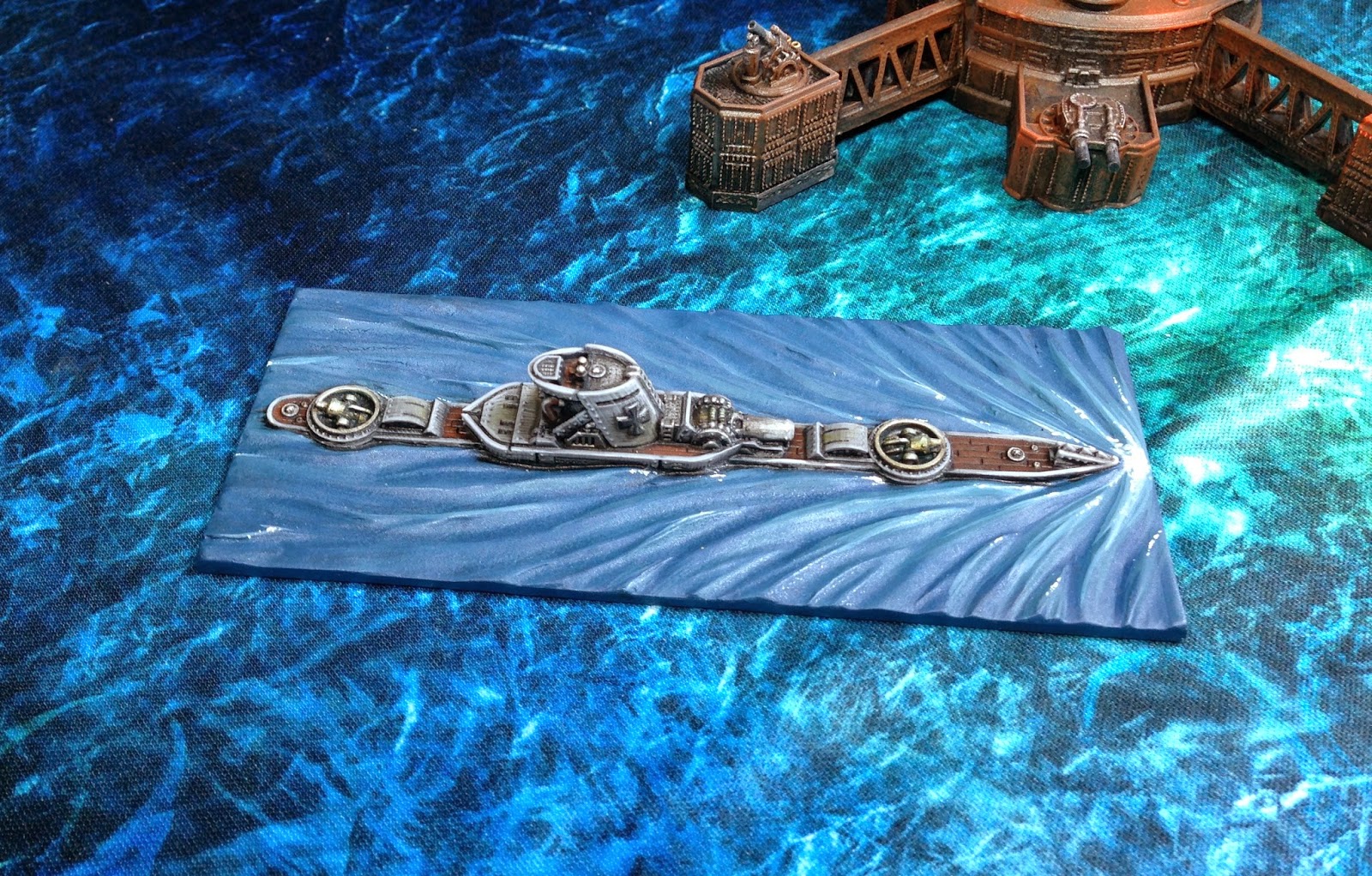 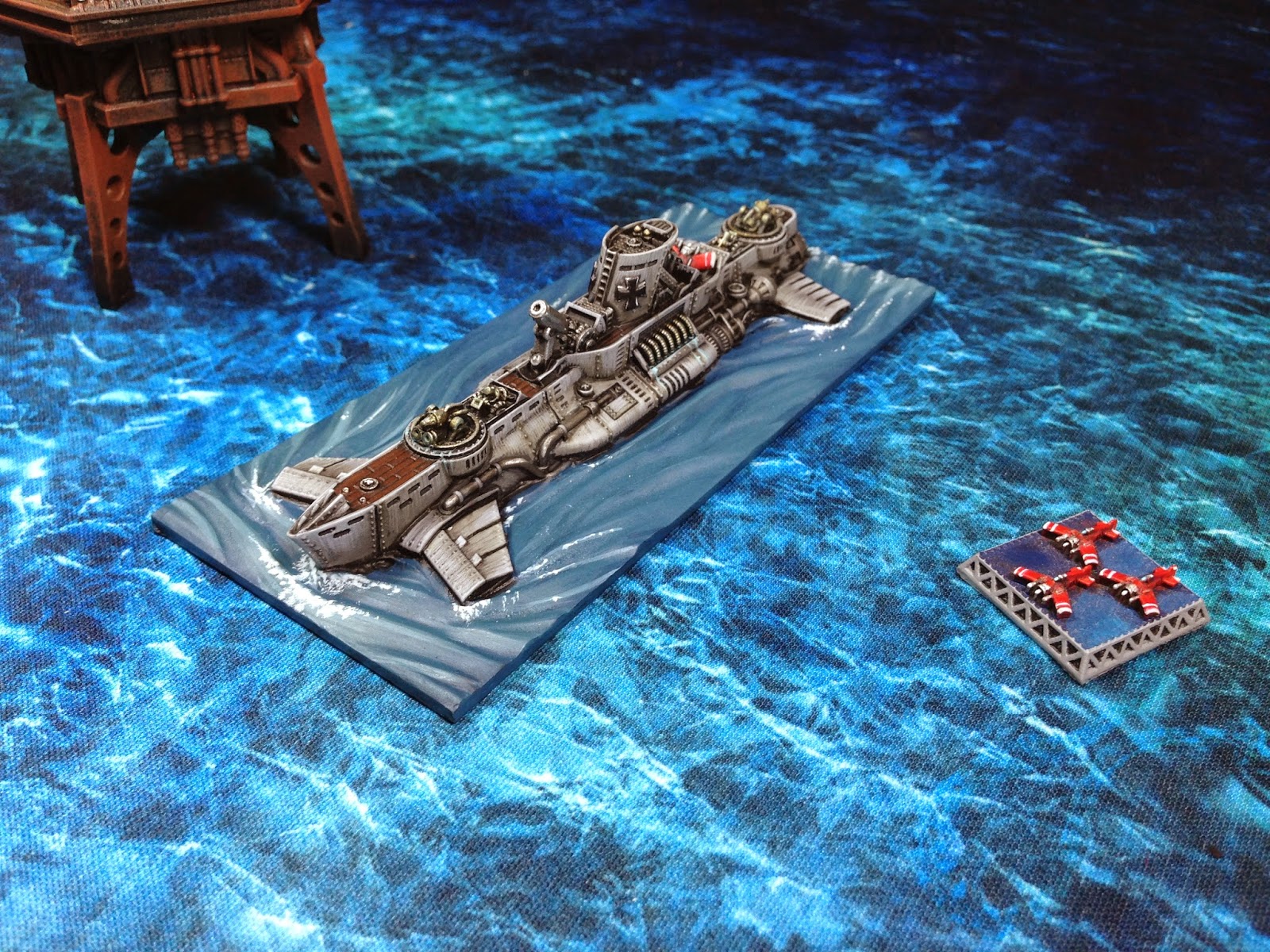 Good luck with painting your own scenic bases and tokens! I hope this has been an informative articles and a good showcase for some of the techniques in action. In the future, I intend to have some stage-by-stage pictures to act as a guide, but in the mean time...