WE'RE ON AN EXPRESS ELEVATOR TO HELL - GOING DOWN! 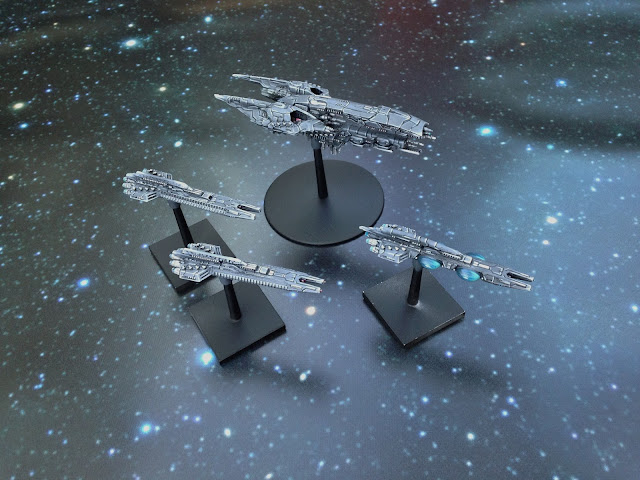 Rest assured, (at time of writing) I have not received my Dropfleet Commander Kickstarter pledge. Nonetheless, because I have time free for a new project and because I am jealous of other local people with their pledges, I gave in and bought some models from my local gaming store. Well done Hawk! You got my money twice...

Totally worth it! These are some really nice models and fun (albeit hugely time consuming) to paint. So far I have built the standard Starter Fleet for the UCM with an additional Lima-class Detector Frigate as the metal Avenger can act as the second New Orleans-class Strike Carrier. Two Toulon-class Frigates, a Berlin-class Cruiser and Moscow-class Heavy Cruiser now sit on the painting table.

My initial scheme is a simple grey, as I wanted something I was familiar with (see my Resistance tanks and Lifthawks) that would look striking on the field. It was a bit of a shock to realise how much I rely on battle damage and rust to cover the mistakes I make on my Resistance forces - no such room for manoeuvre here! The scheme will be very similar to the Studio scheme in the future, as I add panels of lighter and darker greys, but the initial grey is already much lighter than the Hawk scheme.

The UCM will be my first fleet as a I love the models and I have a scheme in mind - Scourge will follow once I work out how I wanted to paint them! Then perhaps some PHR, though I know Adam has his eyes on them...
Thanks for reading,