THE RUINED CITY IS READY FOR RECONQUEST 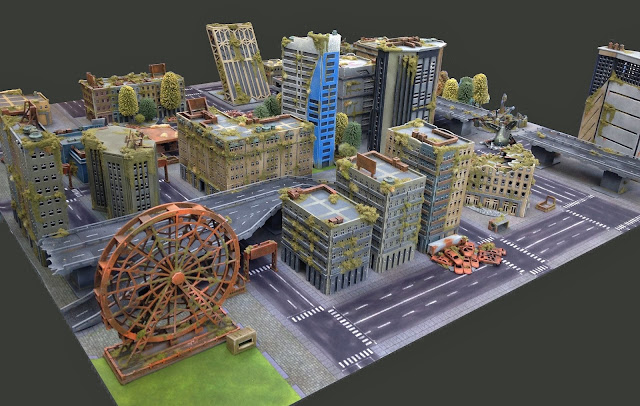 From humble beginnings in the middle of July, the table for Dropzone Commander has grown exponentially into this monstrosity, a board far too dense to play on, costing far too much money and taking up far too much room!

The city features twenty five buildings of various sizes, an Orbital Defence Laser (not pictured as it will not fit on this layout!), several large stretches of flyover and a big box of scatter terrain/forests. Seven of the buildings are over six inches in height (not including the Ferris Wheel), giving a lot of leeway for the various scenarios.

The biggest influence for the city was Chernobyl, with its eerie abandoned playgrounds and overgrown buildings. I wanted the city to look overgrown without being hugely difficult to pack up and store. The base of the city is the Fat Mat gaming mat, which is made from mousepad material and not something I was willing to change. This gives the streets a cleaner look than some of the buildings, but this is covered by the scatter terrain and emerging trees.

If it looks a little "clean" for something abandoned for over one hundred and fifty years, I reasoned that it would have been maintained by the Scourge for a long time, before being evacuated as they used up the resources or were beaten back by the Resistance. Now the UCM have arrived, and found everything slowly collapsing...

I do not have a Monorail or Underground Hangar, so I guess these are potential projects for the future! I would also consider making some more ruins (especially to stand in for buildings that have been destroyed during the game) and take advantage of the taller flyover support columns that Blotz supply - a triple-layered road system over six inches in height could look really, really cool.

No project is ever complete - there will always be new avenues for expansion and new releases that spark the imagination. Nonetheless, with the approaching release of Dropfleet Commander and some upcoming tournaments I need to get back to painting actual miniatures, or maybe even painting terrain for some larger-scale games...

The vast majority of these pieces come from Blotz Terrain, though four of the larger buildings come from DarkOps terrain, and the Defence Laser and a lone Residential Terrace are from Hawk themselves. Model Railway shops supplied the trees.
Obviously these shots show the city with as many buildings as I could sensibly fit onto the table, and when gaming I will be using something slightly more open. Nonetheless, I think it would be interesting to play with all of the buildings!