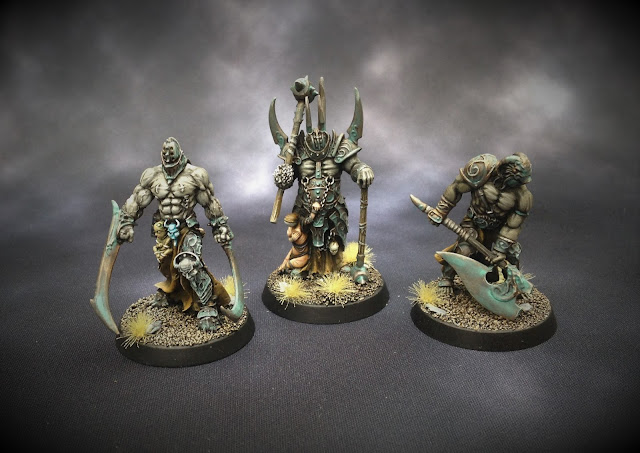 The Frostgrave campaign continues! After an exploration of the first three games, we rejoin the barbarians of the north as they prepare to fight the Worms once more...

Game Four - The Worm Hunts Once More
The Soul-Thief cursed under his breath... too much time had been spent binding the daemon. He had discerned nothing of the secrets of the Dead. His corpse-servant Nekhor had fallen into a ragged heap, no longer responding to his muttered commands, and his warriors were restless. Battle was upon them and Damrahl did not feel ready.

He knew little of the area ahead of them - only that the last of Great Worms hunted below the surface, and the wildmen were eager to hunt it down. Sokhar paced angrily as ever, the barbarian eager to avenge his lost battle-brother.

Only the apostate was still. The scarred warrior watched in silence through a grilled mask, the great paired blades not yet affixed to his forearms but laid before him. Damrahl savoured the thought of seeing them in action, as much as he did not trust the monstrous fanatic that wielded them...

This week we ran the Worm Hunt scenario again as a few of the guys had not played it and it was so much fun last time. This time the wildmen deployed to the right of Winner Dave and his Gnolls, facing Matt and his Lord of the Rings-themed adventurers. Gareth and his barbarians were across the table, safe from my depredations. Brew Potion, Raise Zombie and Reveal Secret netted me a single Potion (I chose a Daemon in a Bottle to help me with any late game combats), which was very disappointing!

The early turns saw my forces advancing toward the centre while a pair of Thugs raced up a tower to fetch a piece of treasure. Realising that they would probably face a Worm, they were followed with a Leap-assisted Templar, but ultimately they made it to the top without anything emerging - in fact, only one Worm appeared during the whole game - obviously we had done the majority of the culling last time! This lone creature was slain by Gareth, which was good for him as otherwise he had a bad time as his warband was overwhelmed by Matt and Dave (and their summoned creatures - beware the Imp!).

My own forces avoided combat for the majority of the game, before turning and attacking Matt's force of militiamen. Some excellent Bone Dart attacks took down several of his men and his Apprentice, but he still managed to take down the Bear and wound the Barbarian, holding off my forces long enough to secure four pieces of treasure! His expert use of Telekinesis denied my forces, and they could only watch as the treasure was whisked away.

The game ended with my Wizard earning enough experience to gain four levels - most of the experience was gained through taking two enemy soldiers and Matt's Apprentice out of action with Bone Dart. Two pieces of treasure and a good number of spells cast added to the total. Treasure-wise I found a second Grimoire of Steal Health (which was sold for 250gc), a Grimoire of Fool's Gold and a further 100 Gold Coins.

Although I was tempted to learn Fool's Gold (it looks hugely annoying), I decided instead to focus on improving what I already knew, ready to dominate the next game. Improving Reveal Secret and Brew Potion will help me out a lot, while Telekinesis needs improvement for securing treasure. Treasure-wise I focused on picking up a magic weapon to fight any ghosts and wraiths in future matches, while a Knight would round out my force with a trio of heavy-hitters. I had a cunning plan with an Invisible Barbarian with a magic axe cutting surprised enemies in half! The Bear would sit out next game as I felt he was too big a target, and wanted an excuse to paint up the Knight model without sacrificing peons to carry treasure.

Spending Gold
The brutally armoured form of Khalar lumbered forward before the wyrd. Still-living slaves were chained to him, dragged in his wake, though he paid them no heed. His great horned helm was a mask of wrought metal, ancient and pitted. Layered plates of intricately-patterned armour hung across his body, while a pair of immense hammers were slung across his back. He did not kneel before the Soul-Thief, nor avert his gaze, but nonetheless gave obeisance with his gift - an immense axe of intricate design. Damrahl could feel the ensorcelled blade thrumming with energy.

Khalar spoke with a voice like stones grinding against one another, at once a rasp and deeply resonant. "Tribute, Soul-Thief, from the elders of the tribe... for all your successes in this Frozen City. May they long continue."

Game Five - Haunted Houses
The air was thick with the voices of the Dead... and more. A thousand atrocities had been committed here, unnumbered lost souls bound into the ruins for all time. The victims of these unseen wraiths lay strewn across the flagstones, bodies both ancient and more recent, rent with ethereal claws. Damrahl eyed the berserker Sokhar, the warrior carrying the magical blade - they would need more than just his strength here...

My fifth game of the campaign saw the board arranged with six treasure-filled houses, and two opponents facing me - Ethan and his Witch, and Jack with his red-clad Enchanter. The Necromancer managed to cast almost all of the Out-of-Game spells, and I gifted a Potion of Invisibility to the Barbarian and a Potion of Strength to the Knight. Brew Potion was proving its worth!

The appearance of a Wraith in the building nearest to me forced the Barbarian to launch his attack with his new magical axe, but tragedy struck and he was struck down! I now had a Wraith in the middle of my warband and no way to stop it! The Thug quickly ran away with the treasure as the two Archers prepared to slow the hideous revenant.

Elsewhere on the table the wildmen launched forward with the Leap spell, allowing the Knight and Templar to career into Jack's small warband with horrifying speed. As the wizard and his apprentice used Telekinesis to rob Jack, I launched my attack. The Templar did well, cutting down a surprised Archer while the Knight wounded an Infantryman, before taking a critical blow and dying outright! The Templar attacked on the wounded soldier, but was wounded as he cut him down... this soldier had caused me a lot of trouble!

In the central building Jack's second Archer had grabbed a piece of treasure but two of my Thugs smashed their way in, disturbed a Wraith, and then butchered the Archer. The treasure-laden Thug fled as his comrade tried to hold up the ghost.

The rest of the game saw Ethan, Jack and I fleeing with as much treasure as we could carry as the (by this point four) Wraiths pursued us - Jack managed to banish one with a Grenade spell, but I had nothing so useful and had to rely on my speed and Leap spells to avoid them. Ultimately one Archer and the Barbarian had fallen to the claws of the Wraiths but recovered. The Knight did not fare so happily, dying in his first game to Jack's Infantryman.

Finishing the game with four treasures, I rolled up 380 Gold Coins (after selling an Amulet of Resistance), Gloves of Casting (which I will keep), and Grimoires for Grenade and Restore Life. I think I will be learning Grenade! The spells, four treasures and previous experience gave me four additional levels, bringing me up to the impressive Level 20.

Spending Experience
Spending Gold
It took several warriors to drag the massive carcass of Khalar back into the warband's territory; all those who were not already wounded or carrying the revenant's ancient treasures had to work together to shift his armoured bulk.

Damrahl had never liked the headman. His attitude had been arrogant, too used to brutalising farmers and the weak villagers in the north. Here, in the Frozen City, there were real challenges, and real power. Damrahl had taken such power, and he would show it by bringing Khalar back from the sunless lands.

Would he bring him back the same? Damrahl grinned. There were opportunities here...