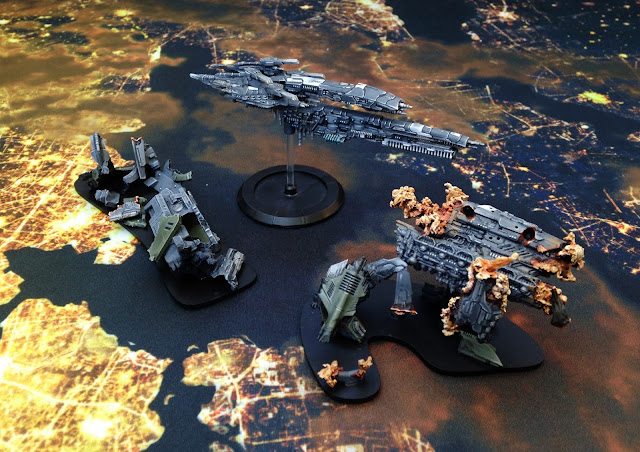 Ever since I started playing Dropfleet Commander, I have wanted to make some three-dimensional Debris Fields. The card tokens that come with the Starter Set are fine, and works very well (especially given ships move through and over them), but I wanted more. I love painting and building terrain, and Dropfleet is simply not a game that uses a lot - Debris Fields, Large Solid Objects, Space Stations... and that's about it. I needed to do something extra!

The Model Exchange released a set of MDF Debris Field markers a fair few months ago, and my imagination was gripped - these would be the basis for my project. You may have already seen the clear acrylic Cluster tokens I use for my Objectives - these are also from the Model Exchange. I purchased them at the same time, and the MDF pieces sat in my project pile for far too long.

It was after a recent tournament (Dropzone, funnily enough) that the project took the next step. I had won a handful of vouchers and picked up a marked-down box of ships from Halo: Fleet Battles. The ingredients were starting to add up.

A pair of massive Epoch-class Heavy Carriers would be the basis for some of my Debris Fields - I wanted a nice mixture of human-looking vessels to wreck without having to buy any more Dropfleet miniatures. I had a lot of spare Frigates and some resin pieces from my Battleships and Battlecruisers that would add some UCM-specific pieces, while a couple of Firestorm Armada vessels from another never-started project would add some colour. The rest was random plastic bits from the bits box, liberally ruined with a Dremel Multi Tool.

The focus of the fields would be UCM-related ships. I wanted a field that would be tied to my Battlefleet. The idea of adding PHR, Shaltari and Scourge wreckage was tempting, but I did not want it to be a messy, colourful soup. Instead, a variety of nondescript debris would be the running theme. This theme would quickly evolve as I wanted to add some colour, be it through coloured plating, or blazing fires.

What feels like several weeks of drilling, sawing and slicing through pieces of plastic saw the Debris Field take shape, and a few more solid days of painting has seen seven tiles completed! Number eight is still on the painting table.

These were not done simultaneously. Three markers were completed, built and painted to see how they would look, and the rest followed shortly after. It was the last stages where I decided to add a pair of recovery vessels - converted UCM Frigates with appendages for grabbing wreckage and repairing ships. One of these can be seen below, alongside my two Repair Cruisers. The second Frigate/Debris Field has not been completed at this stage.

Next up, the eighth and final piece of debris!