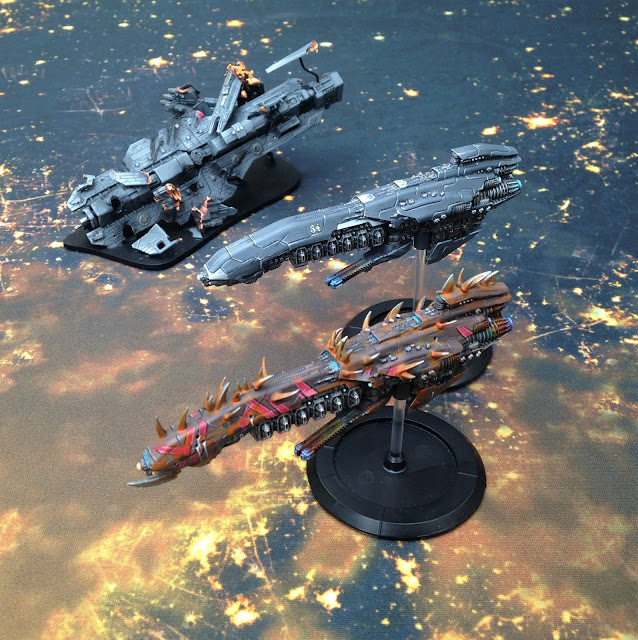 I may have been premature when I stated that the UCM fleet was finished. TTCombat must have picked up on this hubris, and have released the first new design since acquiring the Dropzone and Dropfleet Commander games; the Centurion-class Cruiser. This antique vessel is a relic of the pre-Fall days, the mainstay of the Terran Grand Fleet before the treachery at the Battle of Vega and the Scourge invasion, and their special Limited Edition miniature for this year.

Fluffwise it seems that a scattered handful have survived the intervening years - mothballed by the UCM and kept in their Reserves, or part of the "Remnants," scattered human fleets or individual ships that have somehow survived the decades alone and abandoned. Two new factions have been specifically mentioned - the Scrapfleet of Vega who emerged from the wreckage-strewn battlefield of the great Battle of Vega through sheer force-of-will, armed with a fleet scraped together from the debris, and the Kalium Kabal, a splinter Colony World independent from the UCM, who maintain the ancient designs of the old Earth Fleet with a desperate yet totalitarian, brutal regime.

The rules and background can be found here. This is the first vessel to feature a 2+ armour save - potentially a game-changer in Dropfleet! The rest of the ship is extremely solid - Hull Points to match a Heavy Cruiser, a primary weapons system with Damage 3, average speed and scan ranges. The Point Defence is a little low, but with support from Jakarta-class Aegis Frigates I am sure this will be a solid addition to the fleet. Divisively, it is extremely cheap - my knee-jerk impression says 125pts is an absolute bargain. More than anything I would like to see that go up.

Look and background-wise this vessel brings to mind all kinds of great sci-fi tropes to me, not least Battlestar Galactica, Reavers from Firefly, Pandorum and anything involving spaceships that have been forced to survive through great hardship, alone in the void. The Kalium Kabal evokes the attitude of the Terran Empire of the Star Trek Mirror Universe which is fun, while the Scrapfleet of Vega are probably the easiest solution for those who want to bring the Resistance into Dropfleet.

As a die-hard Resistance player in Dropzone Commander, I was bound to pick up at least one these vessels. Seeing that they can be taken as a squadron of two, I resolved to buy two and model them slightly differently. One would be painted in my usual UCM scheme as an artefact Museum ship, the other covered in spikes, scrap metal and filth. This would be a Reaver-style Remnant ship, clearly crewed by humans who have suffered a great deal in the years since the Fall, working alongside the UCM in the loosest of alliances and assigned the Museum ship as its escort.


UCMS Retaliator is a relic of a lost age, an antique preserved for the future generations of Mankind to appreciate and wonder at. For decades it has sat in orbit around the shipyards of New Carthage; first as protector, then a museum, and now, in the glorious years of the Reconquest and the horror of the Scourge counter-attack, holding the centre of Battlefleet Carthage.

This Centurion-class Cruiser was one of the escorts for the great warship Carthaginian, one of the few that battled past the Scourge invasion and struck out for the Colony Worlds all those years ago. As the Carthaginian was decommissioned, dismantled and refitted into the central hub for the weapons testing facility and shipyards of New Carthage, Retaliator maintained its role as protector, and in time, was decommissioned as well. Preserved for decades as a Museum Ship, Retaliator entertained generations of children and sightseers, while the military scientists of the UCM turned their efforts to building faster, leaner and easier-to-produce vessels.

In the wake of the Scourge counter-attack and the invasion of the Colony Worlds, Battlefleet Carthage was forced to assemble every ship they could muster; several experimental testbed ships with esoteric weaponry, outdated and outmoded Battlecruiser hulls refitted for action, and the glorious Retaliator. Months of refitting and rearming has brought this relic back to the forefront of the Reconquest, taking pride of place among her younger siblings.

- Continuous broadcast during combat over all channels, suspected human in origin

Killfrenzy is a different beast, twisted and corrupted almost beyond recognition. Her surface is pitted and scarred, embellished with a thousand makeshift repairs and brutal-looking spiked modifications. Once a proud vessel of the Terran Fleet, this grand cruiser's history is distressingly vague; the current, savage crew either do not remember or will not speak of it.

The leading theories argue that she escaped or was not present at Vega, somehow evading the subjugation of the Cradle Worlds by hiding amid asteroid fields and stellar phenomena, making short jumps and preying upon isolated convoys or other Remnant vessels. It is unknown how a single vessel survived for so long, and it is generally assumed that the Killfrenzy is the last survivor of a small flotilla, kept alive and operational by scavenging her sister ships and assimilating the crews.

Those few crew that have been glimpsed by the UCM mediators appear viciously cruel, prone to bouts of violence and macabre obsession. Their alliance with the UCM is closer to a prolonged ceasefire - these brutalised survivors have a need for foodstuffs and raw materials, weaponry, and an abiding hatred of the Alien that they can share with their fellow humans. They have the sense to see that attacking the UCM would be suicide, but to fly alongside them, to attack and take their share of the spoils - there lies a profitable future.

Since the recovery of the Killfrenzy and its "repatriation," the vessel has been accompanied by the Retaliator into battle - the only vessel with the corresponding outdated communications arrays and a signature that the feral crew trust. The Retaliator's role is to monitor and guide this berserker, watching the flanks and adding her significant firepower. Observation of this ancient vessel fighting alongside Battlefleet Carthage would see it treated like a vicious, half-rabid attack dog, unmuzzled and thrown into the enemy.


PRACTICE GAMES
After ordering a pair each, Adam and I decided to give them a run. He had also ordered a pair for his PHR fleet (something I have not really touched on above - yes they can be taken by the PHR as well!), so the first game I would use my UCM against his Shaltari with a pair of them, while Adam would play the following game with his PHR against my Scourge fleet.

My list was altered to accommodate them, taking my tournament list from Fleet Muster II and dropping the second Avalon-class Battlecruiser and two New Orleans-class Strike Carriers for a pair of Centurion-class Cruisers. This would give me the points to increase my Corvette squadron up to five, which was nice. This was a bold choice, but the alternative was to lose the Corvettes, something I did not want to do given how useful they have been against Shaltari in the past. The fleet would also pack a lot of firepower and solid Launch capacity.

We rolled for the scenario and went for Grid Control, "the one with the Orbital Guns," and Column approach. I dislike Column approach with this particular fleet - something always has to be sacrificed for the Third Turn, and it usually ends up being my Admiral.

Adam was running a vicious Shaltari fleet lead by the Platinum-class Fleet Carrier, featuring three Motherships with nine Gates, a Basalt-class Carrier, Obsidian-class Heavy Cruiser and six Topaz-class Frigates. The Heavy Cruiser was packing the nasty Particle Lance, while the amount of Launch was going to cause a lot of trouble.

The game started badly after some initial deployments as the Taipei-class Frigates were obliterated by the Platinum-class Fleet Carrier jumping ahead with a Quick Thinking Command Card. My fleet began to target his flagship as it bore down on them, but with shields up the power of the Centurions was stymied, and a Launch Chaff card saved him from my Avalon-class Battlecruiser.

Eventually the Fleet Carrier was destroyed, taking the full firepower of the entire UCM fleet over several turns, but by then it was too late and the Shaltari were overrunning my position. Taking so long to destroy it had meant Adam had free reign to deploy waves of Bombers that brought down my Seattle-class Carriers and the Avalon, before they turned on the Centurions in the final two turns.

Turn Four scoring Adam had the advantage in the centre and was winning by four points; by Turn Six he had capitalised on this, smashed my fleet and won a convincing 5 - 15. Highlights were the five Santiago-class Corvettes taking down two Voidgates, crippling a Mothership, finishing the Platinum-class Fleet Carrier and generally annoying the Shaltari. The rest of the fleet generally underperformed.

The Centurion-class Cruisers did... fine. They were tanks against non-Critical attacks - I think they suffered one hit in total from a failed armour save. The issue was how many Critical Hits and Particle weapon attacks Adam poured into them. The Centurion's amazing weapons did cause damage, but as the Shaltari had their Shields up it was largely for naught. A few better rolls and a few less Command Cards from the Shaltari and this could have been a different result, but I think the power of the Centurions was largely mitigated by the strengths of this particular Shaltari fleet.

The second practise game was meant to be a reverse - Adam running PHR and I running my relatively inexperienced Scourge.Ultimately the game did not go ahead when we had expected as Adam had work issues, but hopefully we will be having a few more soon now we have them in our hands!

I believe Adam is working on modifying his to look more "PHR" - I look forward to seeing that one!