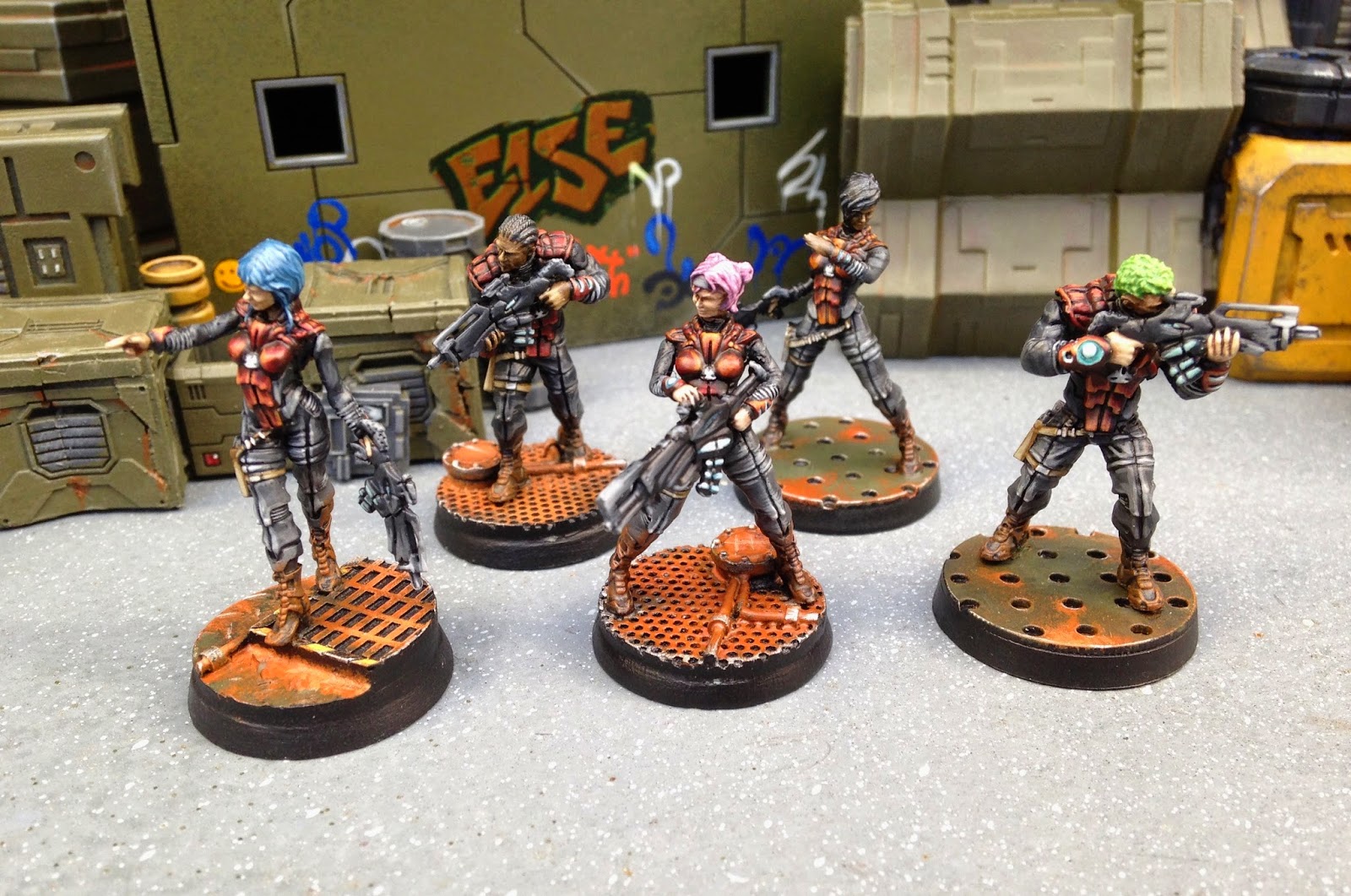 The first game of the League was drawn against James and his Military Orders. I had played James once before in a standard 300pt mission, where we had drawn. It had been a brutal game, with his five-man Link Team of Hospitaller Knights tearing apart my Iguana TAG and a significant chunk of my force before the Alguaciles could salvage the day and score some Objectives.

The first game of the League was a smaller affair, and with only 120pts James invested in a Link Team of Order Sergeants (two with Spitfires, ouch) and a Father-Knight. In turn, I had five Alguaciles (including one Paramedic), a Mobile Brigada with MULTI Rifle and a Hellcat with Spitfire - the crucial piece of the team who would cause carnage in the right position.

The plan fell apart when the League organiser decreed that drop troopers could not use their Aerial Deployment - and unable to change my list, this left me at a distinct disadvantage. The Hellcat was unable to fulfil his role properly, I rolled poorly and only managed to take down one Order Sergeant before James destroyed my entire team and tabled me. Not a great start!

I decided to be that guy and point out that the Escalation League does not allow Advanced Rules, but Aerial Deployment is not an Advanced Rule (only Hacking and Command Tokens count as Advanced). Simon decided we should have a rematch the following week, which James graciously agreed to.

The second attempt at Game One saw both of us take different teams, in a hilarious display of bluff and counter-bluff. James outright told me he would taking a team of five Magister Knights (Heavy Infantry with good weapons, but lightly armoured and fairly cheap), but I chose not to believe him and took the old reliable Wildcats and a Hellcat with Boarding Shotgun. A team of Jaguars with Panzerfausts may have been more useful against James' Knights, but I was glad I hadn't taken advantage in such a manner.

All five of James' Knights were armed with Panzerfausts and Light Shotguns, a deadly combination. I was given the first turn and managed to kill one Knight and wound another with the Spitfire-armed Wildcat, before the Knights caused havoc and rained missiles down upon my team. It was a quick and bloody game, with a massive firefight between the two teams that ended with the Knights charging into close combat and cutting down the Wildcats.

The Hellcat only appeared at the last minute as he had no good avenues of approach, but could not save the majority of the team. I had brought down two of the five Knights and wounded two others, but had lost four of the Wildcats in the process - PanOceania had earned another victory!

Not a great start to the League, but I rarely start well in these things... time to build momentum, win the next few games and emerge at the top! The classic Submarine tactic.

PAINTING - ROUND ONE
For the first week, I decided to concentrate on painting some of the new Alguaciles, specifically the one with HMG and the Rihanna-lookalike with the Light Grenade Launcher. Lovely models! I also took the opportunity to finish my fifth and final Hellcat - this one armed with a Combi-rifle. Not a loadout I imagine I will be fielding very often, but it's nice to have all five of them painted.

I also had a wild idea while half-asleep to replaced my WIP Clockmaker with something a little more Corregidor (not that Mr. MC Hammer-pants is a bad model, but it is very Bakunin) and started looking through the range for conversion possibilities. I had also had some thoughts about Tomcats, and how it was a shame I only owned one of them - they are one of Corregidor's signature units afterall.

The Tomcat Special Rescue Unit would be a great start for these two new projects. I had initially not liked the look of the Tomcat with D.E.P. and Tomcat Engineer, but figured with some work towards replacing their outdated, giant Combi-rifles they would look much better - the basic body was fine, just let down by oversized guns. The spare guns were taken from the Tomcat Doctor (who would form the basis for the Clockmaker conversion) and a spare Alguacile with Light Grenade Launcher I had acquired - this gun looked interesting with the grenades around the stock, and with a different paintjob it might look somewhat like an underslung Adhesive Launcher - good for a number of troop profiles.
The Tomcat Engineer would need a different head and a replacement arm, and probably a few more tools scattered about to make him look the part. Painting wise, I would paint him slightly differently to the other Tomcats to make the distinction clearer - less armour, etc.

So there we are for the opening round of the Escalation League and a small report on my painting progress so far. Still lots to do, especially when I keep buying new models and adding more projects!