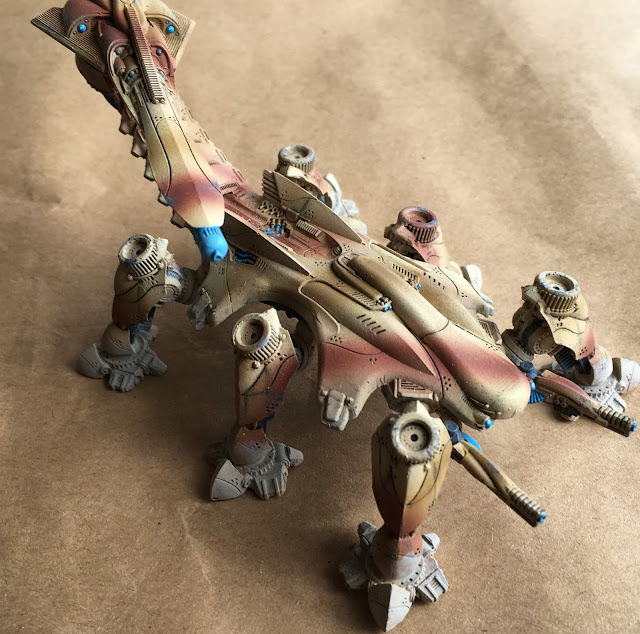 (Editor's note - Adam presents two BIG projects for his PHR force - the mighty Type-4 walkers! I have not had the pleasure to face them yet, but am looking forward to fighting alongside them at the upcoming tournament!)

Coxer here with two new additions to my PHR force, the mighty Type-4 walkers – The Hades and the Nemesis (they're new to the clash and glimpse the nemesis all around them).

Both of these were gorgeous model to put together, I would say that the occasional leg still seems to disconnect from the body, and in hindsight a pin might have been sensible with these beasts, but as you can see these kits have about eighteen pieces each and thankfully few lines, so I was able to clean them up and partially assemble them fairly quickly. 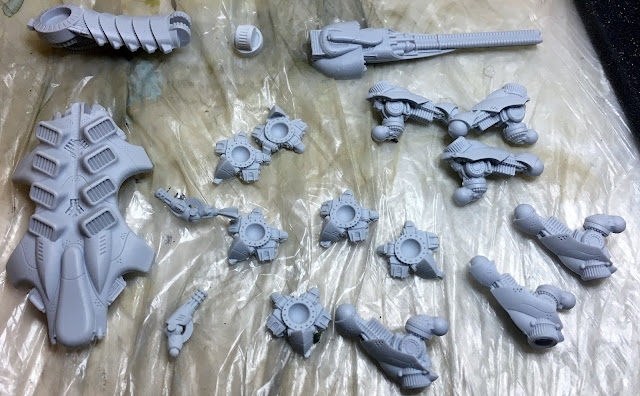 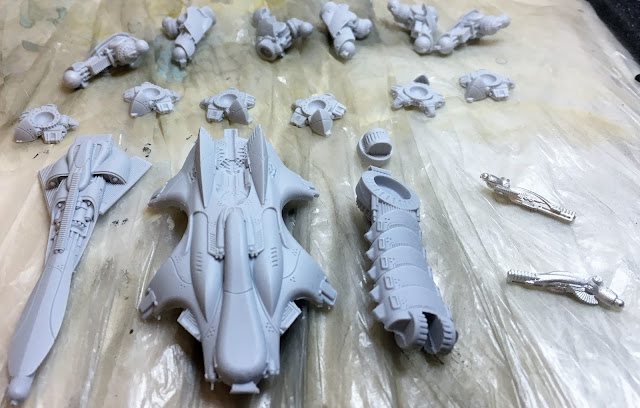 Talking about that, I kept it deliberately in pieces for painting, as it meant I wasn’t having my own personal morale broken trying to paint a huge kit all at once. It also meant I could get to some of the details that bit easier. For both Type-4’s I assembled the tail with the gun on it - really nice attachments of the gun to give you both horizontal and vertical angle, and I’ve tried to keep mine off center as I prefer the aesthetic. I assembled the mandible guns to the thorax, and kept the six legs free. One odd bit I thought about the kits was with regard to the tail sections, The Nemesis has on it’s tail vents similar to those found on the thorax of the Hades, and it confused me for a bit, as the cabling underneath is clear for which Type-4 it belongs to, but the vents threw me a little! 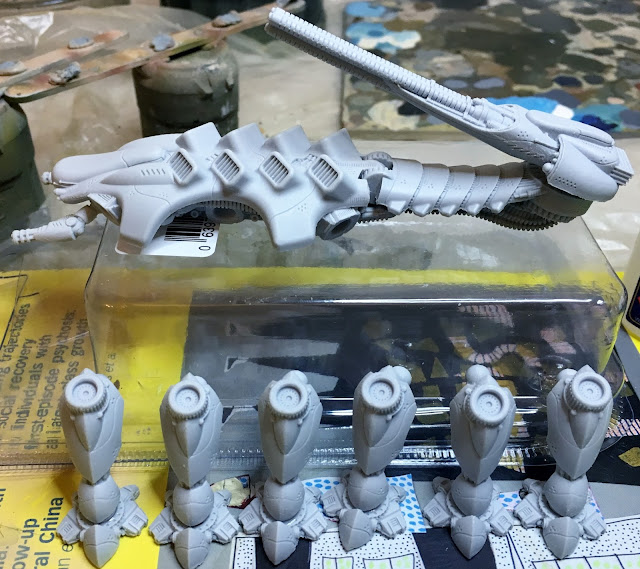 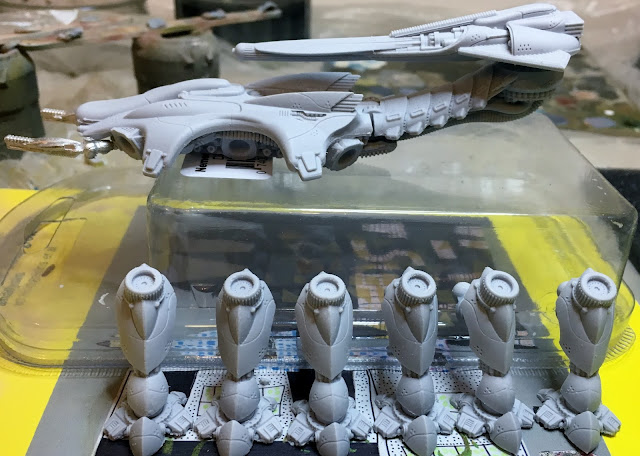 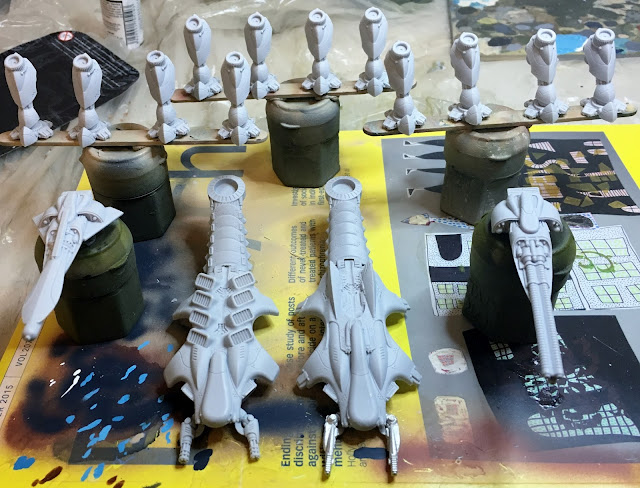 I approached the painting the same as the rest of my PHR, a base layer of Desert Tan primer from Vallejo, with the some US Modern Vehicle and German Sand Beige (both by Mig) for the entire length of the model – I highlighted with a mix of ideas, some plates were panel highlighted, others more zenithal – depends on where in the model really. After that I applied the camouflage with the Rust and Khaki Brown (both Vallejo air). I deliberately tried to do a lot of variation on the legs so I could then mix and match where needed on the model. Blue Tac'ing the tail on, I realised that the underside connection isn’t great – you will end up with a gap unless it’s flush – which wasn’t my plan – so in the final build I positioned the legs as best possible to hide that! 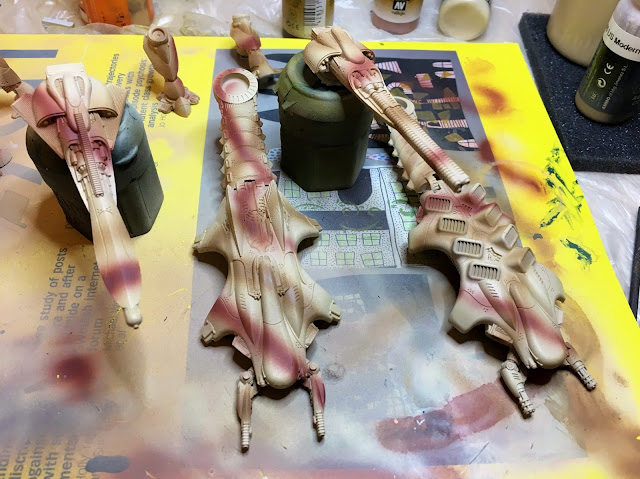 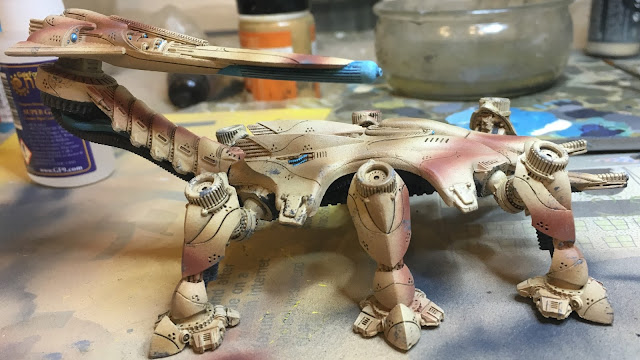 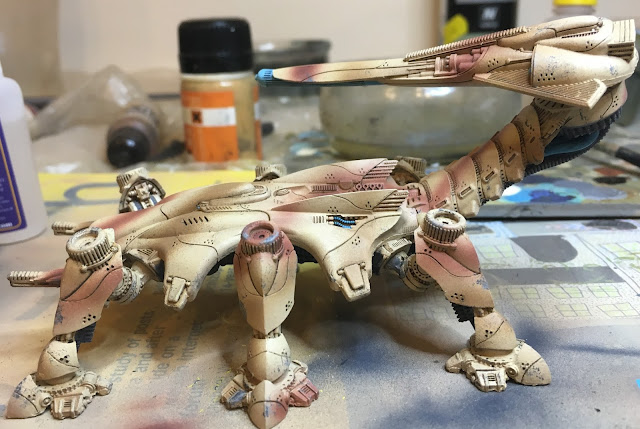 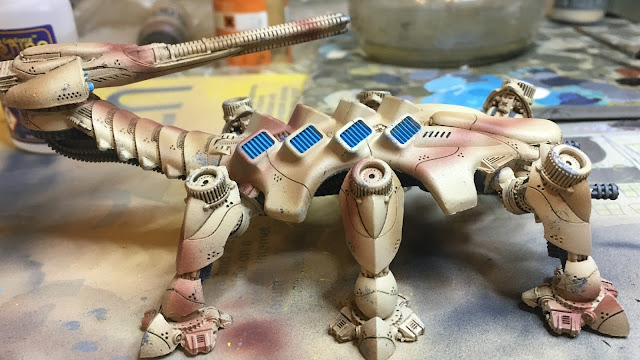 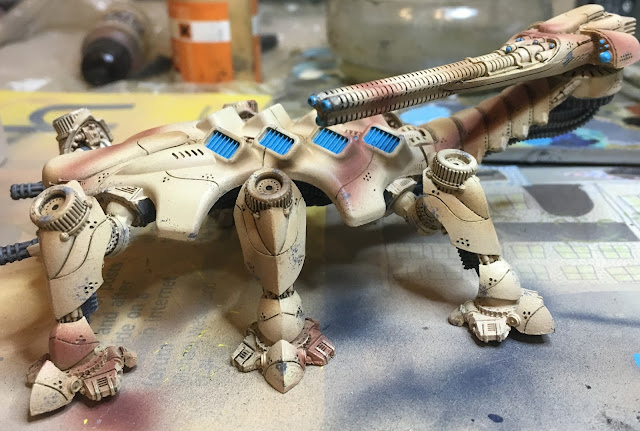 Having finished the base colours, I applied my DAK filter, and left them for a day to dry. After this I sponge chipped and painted on any grey metallic parts and highlighted as needed. The undersides of the Type-4’s was a conundrum, so I opted for the same blue as the dropships (figured they’d be transported by Poseidon so would be blue for camo…) and again a gentle drybrush of light grey was all that was needed to finish. 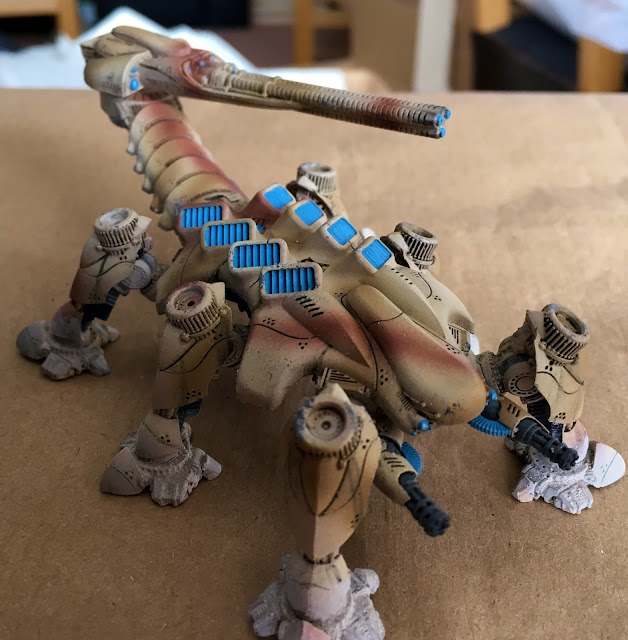 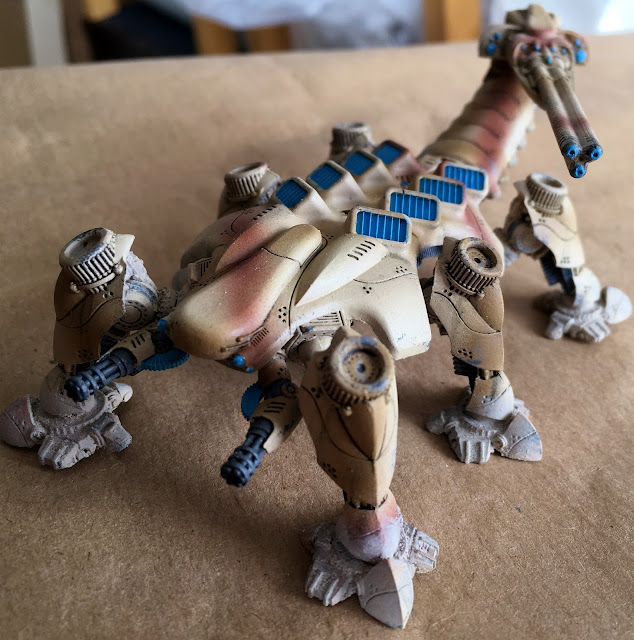 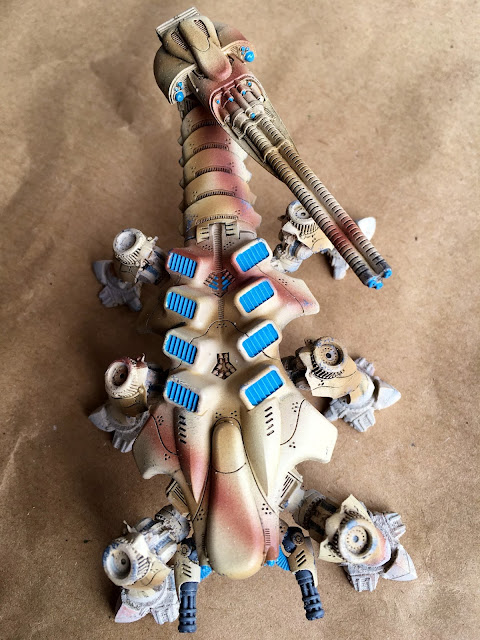 Next was the Brown Ink and the panel lining – that was a huge pain, and a massive task, but I think it worked well in the end – it was very time consuming, but really adds to the definition. Finally I painted the blue, and highlighted that – I went for blue (after an initial grey) on the Hades' vents, as it was lacking in blue I felt prior to that, and just added to the scary nanomachine vibe.

I assembled the pieces and then weathered – initially grime streaks, then liquid dust (all over the underside of the thorax too) before finally dry dust and varnish – as well as the lower legs I also went for the joints to the body as that felt like they would be a great accumulator of grime. Lastly I added gloss varnish to the various lenses. 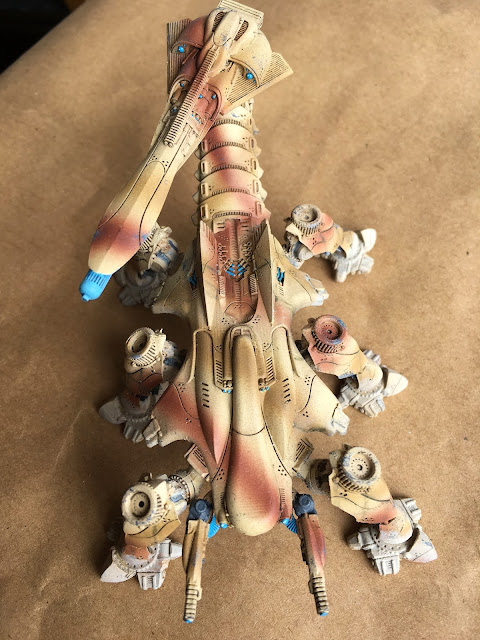 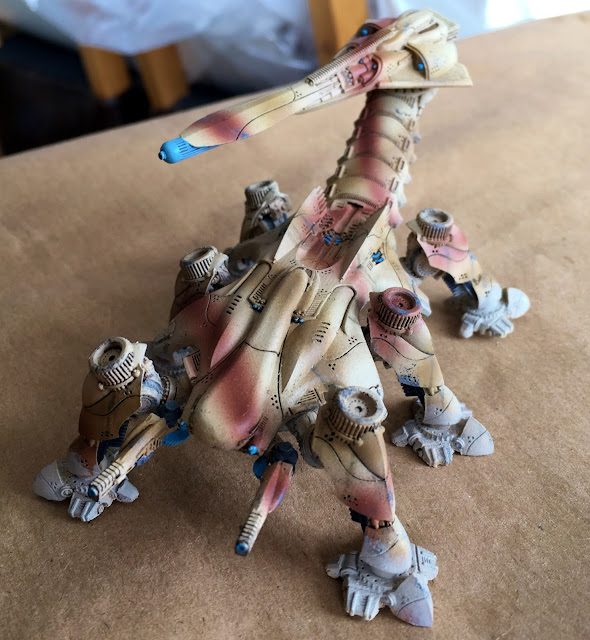 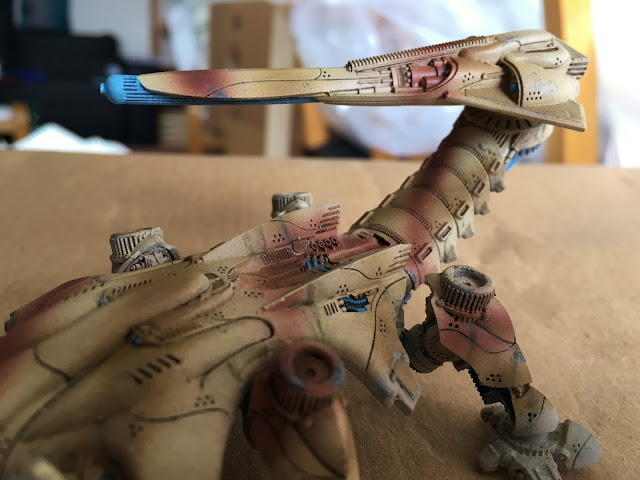 Anyway that’s the boys done, I hope you enjoy!
Posted by Coxer at 19:27