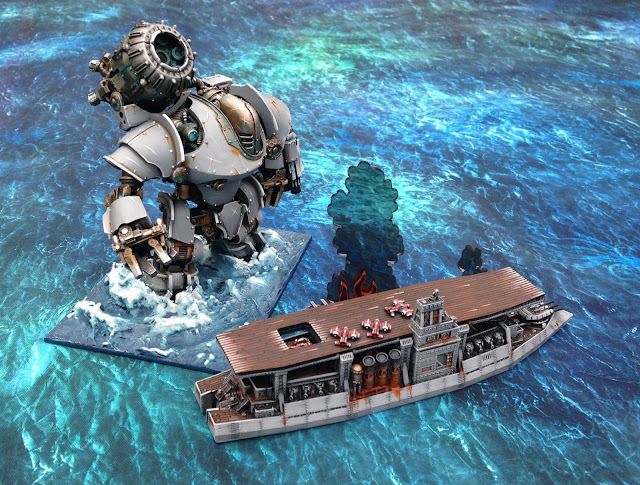 Welcome to another Battle Report from Full Spectrum Dominance, and a return to the North Sea as the Hunt for the Markgraf heats up! With the Markgraf hiding in the Prussian port of Bremerhaven, the Russian Coalition have lost their patience and deployed an immense Dreadnought-Robot to attack the city... but first it needs to get to the walls, and the Kingdom of Denmark are standing in the way!

This game will see the first appearance of the mighty Petrushka, and the first time Mike will be running the Kingdom of Denmark. Quite a challenge for him! This game was set at just over 1,500pts, and the scenario chosen from the Ironclad Scenario Pack, as discussed below...


THE SCENARIO
We returned to the excellent Ironclad Scenario Pack by Drachenfutter for the scenario, as I wanted something a little special for the introduction of the Petrushka. Nothing too crazy (like the Fusion Leak some weeks past), but suited to the close-range brawling nature of the fleets.

We settled on "Royal Couple," a fairly simple scenario (but one we had not tried before), where the centre of the board was dominated by two zones. These zones would require squadrons present in both zones at the same time to gain Scenario Points, with more points awarded for larger "pairs." The key here is that you cannot deny your opponent gaining the points without destroying his vessels, but must commit everything to the middle of the board to score - this should be a bloody match!

The presence of the Petrushka was not a surprise for Mike, and he was given some warning before choosing his list. Whether he took this into account is something worth thinking about...

This fleet was not chosen without the scenario in mind - I wanted to focus on bringing a good mix of squadron types and sizes, and try out all of the Specialist Squadrons. As well as the Petrushka, I also wanted to run the newly-painted Rogatina for the first time. Three Medium, three Small and two Massive squadron should help in this scenario, luckily! I went for Fighter Planes (initially) as the Kingdom of Denmark have a reputation for fielding a LOT of tiny flyers.
The Kingdom of Denmark
One Asgard-class Heavy Battle Carrier with Shield Generator, carrying one wing of five Fighter Planes, one Reconnaissance Plane, and accompanied by six Tyr-class Assault Craft
One Raggnarok-class Pocket Battleship with Shield Generator and Aggressive Crew

One Squadron of two Fafnir-class Light Sky Fortresses with Tesla Generators, each carrying one wing of four Dive Bombers
One Squadron of four Magni-class Assault Airships

Mike's fleet was compact, restricted by my collection of Danish vessels and choosing not to take any Lend-Lease models from the Prussian roster. The Magni-class Assault Airships were a new addition, while the Tung Squadron would see battle for the first time. This was the first outing for the Danish since their updates some weeks ago.

With no squadrons within range of both zones of control, neither fleet scored Scenario Points for Turn One

The losses suffered by the Russian Coalition have prevented them from scoring this turn - a potentially crucial blow!

The Russian fleet has been badly damaged, but both of their Massive units are scoring, giving them a big boost!

The surviving Suvorov-class Cruiser gives the Russian Coalition the edge they need. we elected to play another turn

A last grab by the Kingdom of Denmark secures crucial points, and denies the Russian Coalition a Pyrrhic victory

The Svarog-class Battle Robot - how did it do?
Before being destroyed in almost one turn by a squadron of Gunships, a pair of Light Sky Fortresses and a squadron of Dive Bombers. Ouch.

The Petrushka can take a lot of fire, but the Danish are kings of Range Band One, and the amount of dice they can throw is incredible when they get in the right position. A lucky critical hit taking four points of damage off him and the aerial superiority inherent in the Danish fleet meant I was struggling to keep him alive later in the game. Perhaps he should have been held back a bit longer, or been deployed closer to the Kostroma-class Fleet Carrier to get more aerial defence, but this might have scuppered my chances to score Scenario Points.

Overall I probably should have held back a bit longer with the entire fleet - the Danish mines slaughtered me as they were propelled into my nicely bunched squadrons. They are really nasty! Usually I am the Danish player rather than the victim, and it was impressive to be on the receiving end.

A number of key critical hits and good rolls really scuppered my chances - the Chaos and Disarray stopping my Tambov-class Gunship from Linking fire, for example, but overall I feel Mike had the upper hand for most of the game. It started so well, but once the Rogatina Squadron was destroyed I was fighting an uphill struggle!

The Chany-class Strike Submarines, Shashka Squadron and the Kostroma-class Fleet Carrier stood out for me today - reliable amounts of dice, and tough when it counted. Shashka Squadron will be making a future appearance (though avoiding mines where they can!), while the Chany's continue to make the Rostov look obsolete.

The Danish fleet continues to impress - the Asgard remains a must-take, and the new addition of the Magni-class Assault Airships brought even more mines to the field! Their boarding parties were not so impressive in this game, but I imagine they would cause trouble with better dice.

The fleet is light, and with better fire at longer ranges they would really struggle on a board like this, but luckily they were faced with a fairly short-range Russian fleet. Against another fleet, I am not so sure they would survive.

The firepower of the entire fleet is really something to behold, and I should have done more to stop them. Destroying the Raggnarok was one thing, but not finishing the Skagerraks allowed them to Link their fire and cause serious damage to the Petrushka, as well as drop mines that smashed the Chany-class Strike Submarines.

Overall a lot of fun, and a really nice scenario for these two brawler fleets! The Petrushka needs a bit more practice, but will have to be dragged from the ocean floor first!

"Battle Group Kreml and the Petrushka were halted and all but destroyed by the Danish fleet at the mouth of the Skagerrak, a deep shock for all concerned. Once again, the tenacity of the Prussian Empire and their allies was stifling the Russian efforts in the North Sea, and their efforts to pursue the Markgraf were fast making them a laughing stock across Northern Europe. Pushing back their plans for Bremerhaven, the White Navy instead moved their focus to Agger and the hulk of the Petrushka - first they would recover their mighty war machine, and then they would smash the Prussian fleets once and for all..."