Shadow of the Colossus

THE PETRUSHKA DREADNOUGHT-ROBOT STRIDES INTO BATTLE 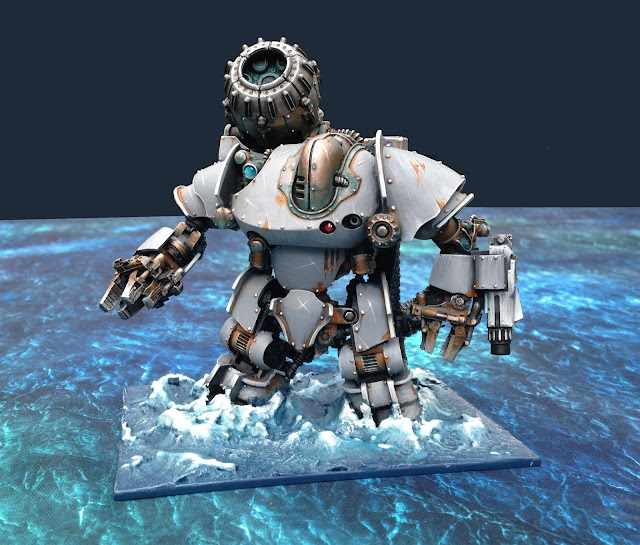 Something special this week - the Russian Coalition have a new reinforcements in the form of the immense Petrushka Dreadnought-Robot, my stand-in for the Svarog Battle Robot. Even larger in the stature than the Hochmeister Dreadnought-Robot and carrying some ridiculous weaponry, this monster should bring the Russian Coalition back into contention for the ongoing arms race.

The Petrushka is based on the Thanatar Siege-Automata from Forgeworld, and I did not change much of it at all! A few symbols were removed, some servo-skulls replaced and the legs sawn off so he could stride through the ocean, which was made with Green Stuff and Polyfilla.

I chose this model because I wanted something big, crude and brutal - the Robot I wanted for the Russian Coalition rather than the more... ornate Svarog-class. My initial experiment, the Arktica Ice Breaker, was great, but far too small, and I continued my search across several different companies. Eventually I settled on the Forgeworld Thanatar, as it had everything I wanted, with very little need for conversion.

While the conversion was fairly quick, the painting took a great deal longer - over fifteen hours, which for me is an absolute lifetime. The scheme follows the standard grey of the Russian fleet, with brass, bronze and rusted metal. The wrist-mounted cannons were highlighted close to white to match the turrets of the other naval vessels, and a pair of lenses add some colour to the beast.

Onto the pictures and my own home-grown narrative...
Thanks for reading,