WINNER DAVE SHOWS US SOMETHING COMPLETELY DIFFERENT - SAGA!
(Editor's note... something new this week as I invite some more contributors to post their stuff on Full Spectrum Dominance. Winner Dave is an old friend and foe, who dabbled in Dystopian Wars, Infinity and Warhammer 40,000 in ages past. Now he's jumping into historical games, and though Saga is not something I play myself, I thought the paint jobs were too good to ignore! Now over to Dave...)

It's been a while since I posted on here, but a new year sees in a new game and a new game can mean only one thing...new armies. Yes, plural as this is my second Saga army.  My first army comprises of Crusaders and I love 'em, however the poor fellas have what I like to call a "temporary" paint job - as in I very quickly airbrushed on the main colours so that I could get into the game ASAP.

With half a dozen games under my belt it wasn't long before I considered a tournament and, as luck would have it, my FLGS announced a tournament mid-April.  It's a Dark Ages-only tournament, which meant the Crusaders would not qualify and I needed a new army.

After some deliberation (but not much!) I settled on the Scots.  I wanted something with a very different feel to the Crusaders, so all foot as opposed to mounted, defensive/counter-punch play-style.

I bought a 6 point army, consisting of Warlord, two Hearth Guards, three Warriors and one Levy with Javelins.  In case you don't know Saga the Warlord is free, each Hearth Guard unit gives you four men, each Warrior unit gives you eight men and Levies twelve men.  I subsequently found out that the tournament is Doubles, so we'll only be fielding 4 points each... a big relief as I'm currently half way through painting with roughly one month to go!

I started with the Levy unit. I've kept the colours varied but simple and I bought these cool magnetic bases from Sally 4th to aid movement. For the levies I thought the irregular design would look most appropriate.  I got some good feedback from the studio-tomahawk forum and subsequently added a bit of weathering to the feet and hems of cloaks. 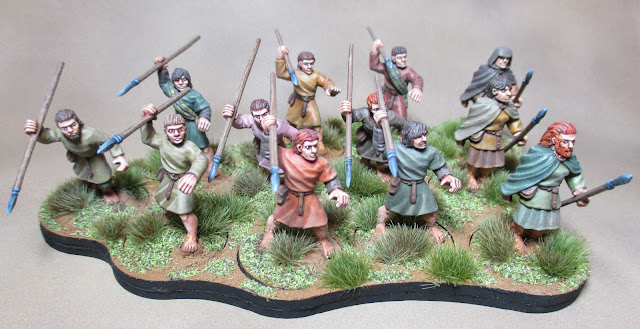 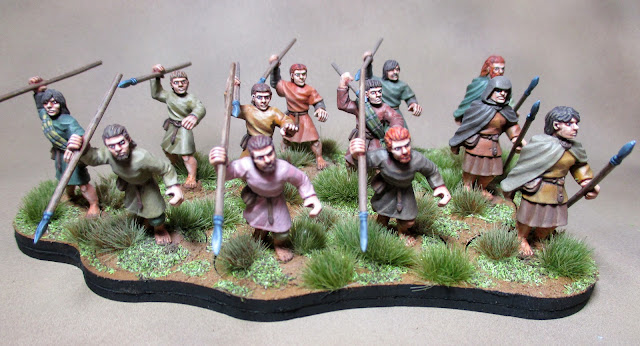 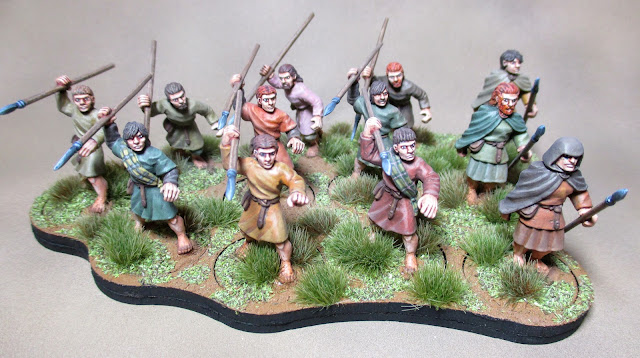 Next I painted my first unit of Warriors, again I went with varied colours for the tops, but to show these guys belong to the same clan I painted the kilts the same.  For the metal colour I decided to try a new technique called the loaded brush technique.  Basically you dip your brush in the base colour, then the very tip in white and apply.  The idea being to create a smooth blend as the white is used up. I found it very time consuming and kept going back and forth, I think I'll stick to layers in the future and try to improve my glazing technique for smoothing. 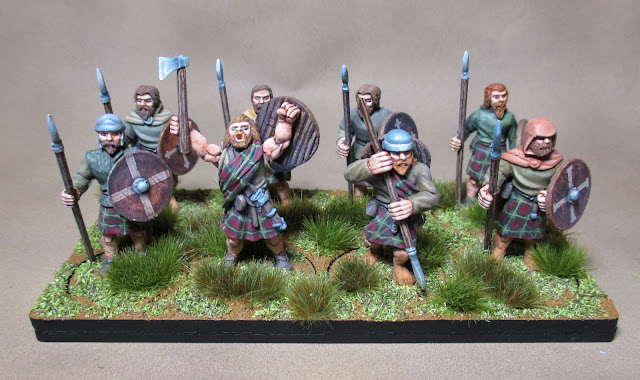 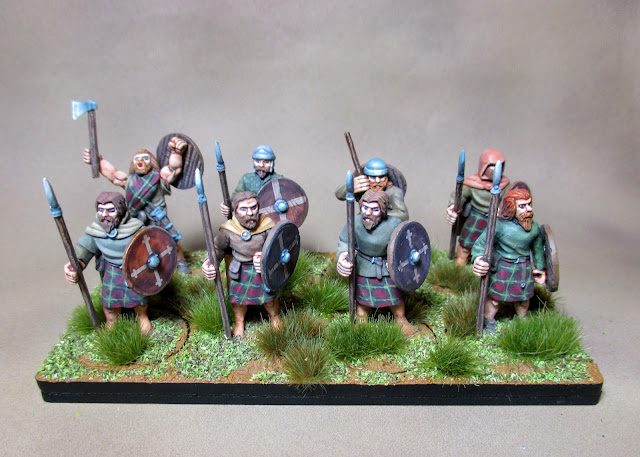 In terms of list the Levy are a mistake at 4 points, as they don't contribute a Saga dice to the pool, so I'll be playing with five dice.  If I have time, I'll paint another unit to replace them, but that's looking not very likely.