GETTING READY FOR AN UPCOMING DROPZONE TOURNAMENT 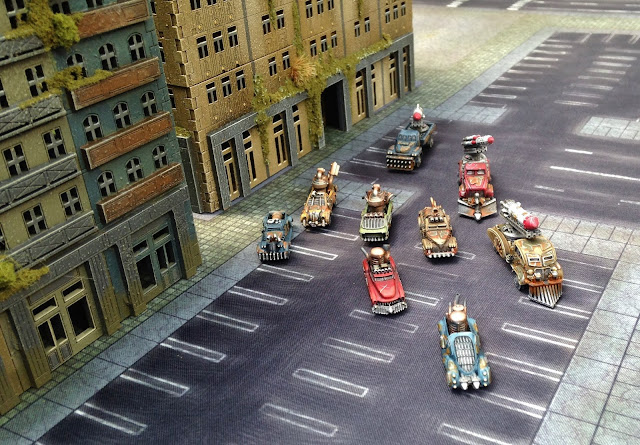 Next weekend sees myself and Adam head to Coastal Assault Tournament in Brighton (held at Dice Saloon), the second of these tournaments this year. Over the past few weeks (and especially since the release of Reconquest Phase II) we have been furiously practising, discussing lists and painting to get ready. Only the pair of us are attending this time, so the risk of playing someone from our own gaming group should be lessened!
Here is the list I am intending to run, honed after four or five hard-fought games...

This list has been tested twice, and something similar two or three times before that. The majority of these games have been against Adam and his PHR, with a couple against Rich and his UCM forces, and performed well! The list had a nice speed, with a lot of good guns for land and air, and though the infantry was a little mediocre, my preferred playstyle was to smash buildings and shoot down enemy transports before CQB could even be considered.

As usual, the scarcity of common opponents in my local area is telling - I feel confident against PHR and UCM (to a degree), but Shaltari and Scourge will give me a headache! Should I face them at the tournament it will be first time I have played them for a looong time.

The main commentary on this list looks at the overwhelming amount of anti-air (too much?), but I hope this will serve me well against Air Cavalry UCM or the incredibly fast forces of the Shaltari and the Scourge. So much AA allows me to play more casually with the Gun Wagons, often sacrificing them to draw fire and bring down a key Raven or Triton - denying the enemy their Objectives.

I was disappointed to only reach Command Value 3 and not find any points for Scouts to assist the Thunder Wagons, but the list is tight! The expense of the Typhoon Gunships really stretches the points, especially when Zhukovs are already on the board. Previous lists with the cheaper Cyclones allowed for a higher Command Value.

I decided to keep the Gun Wagons alone (rather than adding the Support slots like the Barrel Bomber and Thunder Wagons) as I decided I needed some lighter Battle Groups that could act as throwaway Activations. Ultimately nothing in this list is really superfluous except perhaps the Thunder Wagons - everything else is important to the missions (blowing up buildings, blowing up the enemy and securing Objectives), and this has caused me problems in the past! Making the decision of what to activate and what tricks to hold closer to my chest has been a real problem with his list, as with most of my Resistance lists.