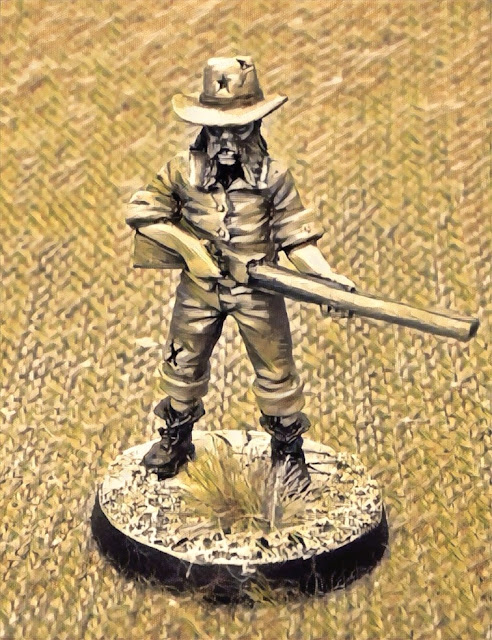 This week saw Winner Dave and myself engage in our first games of Dead Man's Hand, with three scenarios from the main rulebook that set the scene for an escalating engagement in the small town of Sweetwater.

Dave ran his gang of Outlaws (featured recently on the blog) while I ran a motley crew of cowboys, townsfolk and the local Sheriff using the rules for the Cowboy gang,

THE GOOD, THE LEAD AND THE UGLY
Opening Scene: The Stranger

In our opening scene, a rowdy trio of Outlaws have careered into town and raided the local bar. They raise merry hell, disturbing the clients, the townspeople... and the hard-eyed killer trying to rest in their midst. Tired of their debased antics, the mysterious gunslinger in a long black coat waits for them outside of the bar...

The first scenario saw Dave running three of his Outlaws while I ran a lone Gunslinger. This is a strange scenario, as the lone gunman must take on three models simultaneously. Initially scoring some good hits and bringing down one of the Outlaws, a point-blank blast from a shotgun saw the bemused Outlaws continue on their way...

This was a nice taste of the rules, but is a bit of a conundrum for the future. I think I might have been better off splitting my firepower, as the Outlaws are restricted in how they can act (as they are drunk) until one of their number is out of action and they are considered to sober up a bit!

Second Scene: This Town Ain't Big Enough...
The Outlaws have run there way deep into  the town, looting and causing chaos with their weaponry and fearsome outfits. The townspeople rally behind the newly-arrived Sheriff, who calls on some of the most trusted citizens to grab their weapons and unleash hell!

This scenario saw our forces scattered across the board, in pairs or alone. Early on a gunfight between  two Outlaws, the town drunk and the hillbilly with a rifle saw Jimmy McPoyle blasted through a window by a shotgun blast, and shortly after this the Sheriff was surrounded and gunned down by Outlaw gunslingers. The townspeople rallied as the local Landowner gunned down one from his high vantage point with a repeater, and the Bank Teller blew another Outlaw apart with his own shotgun. Faced with this strong resistance, the Outlaws scattered into the backstreets of the town.

The second game saw a lot more models being used, and was a lot more fun! We quickly saw the power of a close-range shotgun blast, while the Sheriff suffered a slower fate as he was shot down by a bevy of pistols from all directions. I was very impressed with the repeater from on-high, and the Bank Teller with the last-minute blast from his shotgun saved the day! The importance of using actions to recover became hugely important, as well as the deck of cards - a number of well played cards were the difference between a model being taken out or surviving and gunning down an enemy!

Final Scene: We Will Be Waitin'
The Sheriff has been badly injured and the townspeople of Sweetwater are getting desperate. Offering a huge payoff to two desperadoes, they begin to plan a counter-attack. The Outlaws are not stupid, however, and intercept these dangerous men as they enter the town...

This scenario saw my new boss and a gunslinger alone on one side of the board in front of four Outlaws, while the rest of my force would arrive from the far end of town, where they would face three Outlaws. The Bank Teller with shotgun was hidden out of sight nearby, but could not activate until later in the game.

The opening moves saw Dave play two Stumble cards on both of my starting cowboys, leaving them unable to shoot, surrounded and desperate. The gunhand was cut down bloodily, while the Boss was badly wounded and would probably not survive another round... until I played True Grit and he recovered completely! The Bank Teller appeared to aid him and the pair blasted two Outlaws, while the rest of the posse launched their attack from the saloon and opened fire.

The game was initially desperate for Dave, as four of his Outlaws were gunned down in quick succession - several at the hands of the "Hero of Sweetwater" - the Bank Teller and his trusty shotgun! Honorary Deputation for him I think! The Outlaws spent a lot of time concentrating on the Boss of the townsfolk, who played it safe and kept himself alive. Soon enough they tired of this sport and turned on the rest of the posse, quickly gunning down "Musical" Pete and the Landowner with repeater, The table had evened up nicely, but the townsfolk still held the advntage and poured their fire into the Outlaw Boss, finishing him. Leaderless and down two two guys, the Outlaws fled!

This was an excellent game, though it must have felt rough for Dave in the initial turns as his Outlaws kept failing rolls and running out of ammunition. In the end he took down three of the townsfolk, but had lost his Boss, Gunslinger and three other Outlaws. The town was saved, for now!

So there we are, three quick games that were played in less than three hours. Overall we found it a great learning experience, and though I'm sure we were playing some of the rules wrong (as you would expect learning together) we resolved most of these issues by the end of the night. We may not have utilised Interruptions or hand-to-hand combat much, but Dead Man's Hand is not a complicated game.

Next time will be tighter, and hopefully we can use some other rules like hand-to-hand combat, or exploiting cover a bit more. As it stands, shotguns rule the day, with the Bank Teller probably scoring at least five kills over the three games.

I look forward to trying to record our games a little better in the future, and perhaps we can think about proper Battle Reports? I certainly hope so.