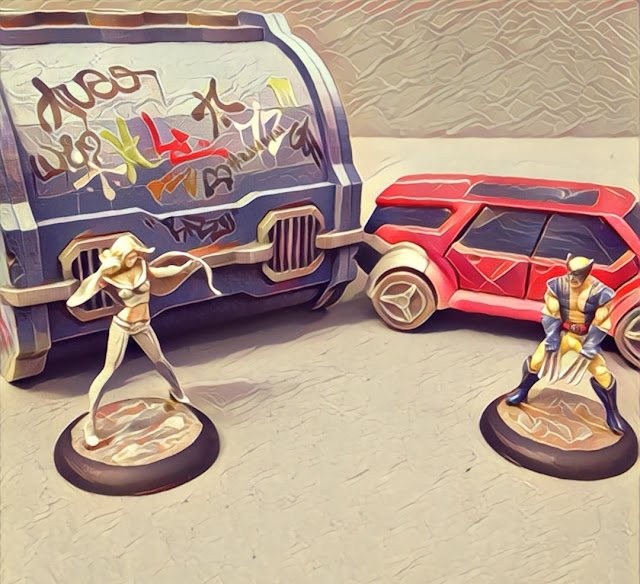 Much to my horror, yesterday saw confirmation that Knight Models have dropped/lost/misplaced the license for the Marvel Universe, confining their Marvel Universe Miniatures Game to the quiet halls of "unsupported games," where it will slowly fade into memory.

Here's their official statement, taken from Facebook but repeated elsewhere.

This is going to be a year full of changes and new projects at Knight Models.

Our company was founded in 2008 and began working with Marvel Entertainment Inc. licensed products by designing and manufacturing high quality miniatures of its most famous heroes and villains for collectors and painters. Later, we expanded that relationship and created the Universe Miniature Game and its range of gaming miniatures.

Our long entrepreneurial relationship with Marvel has been incredible, and working on such a gratifying project for so many years, developing those characters that we love so much, has made us very happy. Unfortunately, all good things must come to an end.

Knight Models will no longer make products based on the Marvel Universe licence.
It has been a difficult decision, as many hours of work, effort and excitement were invested in this licence. But we consider that our business must follow another path.

We would like to thank the teams at Disney and Marvel Entertainment Inc. for allowing us to create such wonderful products. We also want to thank you, our followers, for your support.

Our investment in our superheroes lines, however, continues with the DC Universe Miniature Game and, of course, our flagship Batman Miniature Game – these lines will continue to be developed, and we’re incredibly excited for the future of these lines, as well as forthcoming projects. The Batman Miniature Game has become a cornerstone in miniature skirmish gaming. The successful launch of the Suicide Squad game box has allowed us to invest even further in the game’s future, and grow our wonderful gaming community.

This year we celebrate the Batman Miniature Game’s 5th Anniversary, and we’re doing so in style, with some very special anniversary products and brand new expansions, starting with the Arkham Knight campaign book, with more great new content to follow.

Of course, it cannot have escaped the community’s attention that Knight Models will soon be launching another big licensed product. We are thrilled to have the opportunity to work with Warner Bros. over the following years, and enter the fantastic, magical universe of Harry Potter. The Harry Potter Miniature Game will be a culmination of the team’s hard work and dedication to creating a true quality gaming experience, and we look forward to launching some of the most spectacular miniatures to accompany it. We hope that you’ll enjoy this new project as much as we have working on it!

So Marvel out, Harry Potter in, and DC continues to receive support.

I'm not against the Harry Potter brand, and wish them well with it. Some of the previews we've seen look like lovely miniatures. Just a huge shame they couldn't keep Marvel!

Obviously I am rather distraught I will not be seeing any more X-Men released in the future; my obsessive side is fretting that I will never have an official Storm, Beast, Mystique... hell, I would have liked a Jubilee model! Perhaps if I am so inclined and inspired I will convert some from the existing DC range - a speedster for Quicksilver, or a big fat model for The Blob, for example, but we will see what the future holds.

As it stands, I never had much time to play the Marvel Universe Miniatures Game, but I am happy to have painted the models I did and will enjoy displaying them in a cabinet or something in the future. I'm not a huge fan of the DC universe so doubt I will be investing and pursuing that - though the new Green Lantern and Sinestro Corps models look fantastic! We will have to see... maybe I'll end up buying some Harry Potter models...