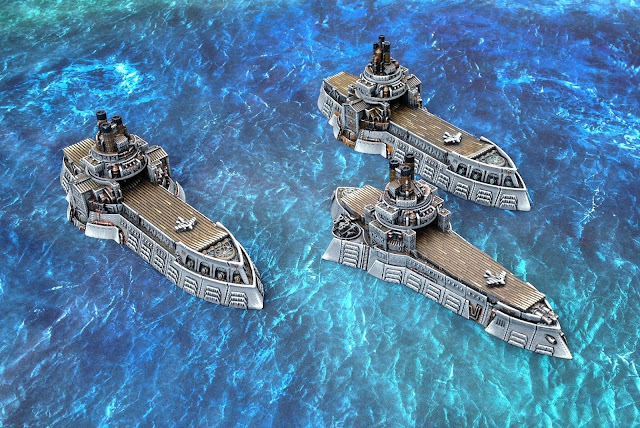 After the mounting horror and crushing disappointment of the end of the Marvel Universe Miniatures Game, I thought it was time for something a little more positive.

The guys over at Spartan Games have been very busy following their Kickstarter at the end of last year, and now we have our first glimpse at all of the new Expansion Boxes for the Core Nations! Their blog posts detailing the second wave of Battleships can be found here, while the new Expansion Boxes are discussed in full detail here. I'm not going to repost everything here, suffice to say that a lot of it looks really, really cool.

Big news aside from these new boxes for the Core Nations is the development of Egypt as a playable faction - and here is the render for their first vessel, the Sekhmet-class Armoured Cruiser. It looks fun! I'm going to resist picking one up (I have enough hovercraft in Dropzone Commander...) but I like the aesthetic and am relieved they didn't go for a more stereotypical extreme Ancient Egyptian theme.
In addition, they have released a new two-player boxed set, the Corsican Incident. Featuring two Mercenary forces battling it out in the Mediterranean, this is a great set for people wanting to add some Mercenary forces to their fleets, and even includes two new vessels - the Spuntone-class Gunship for the League of Italian States and the Hydra-class Rocket Cruiser for the Black Wolf Mercenaries. I have more than enough of these two fleets and will not be picking this set up, but when they become available individually I may partake!

Back to the Core Nations, the Russian Coalition has been holding my attention in recent times, so I thought I would have a closer look at their new range of releases.


So there we are, after months of nothing Spartan are flooding the market with new stuff and trying to bring Dystopian Wars back into the light. I hope it is enough!