THE LATEST FROM THE FRONT - DROPZONE COMMANDER TOURNAMENT 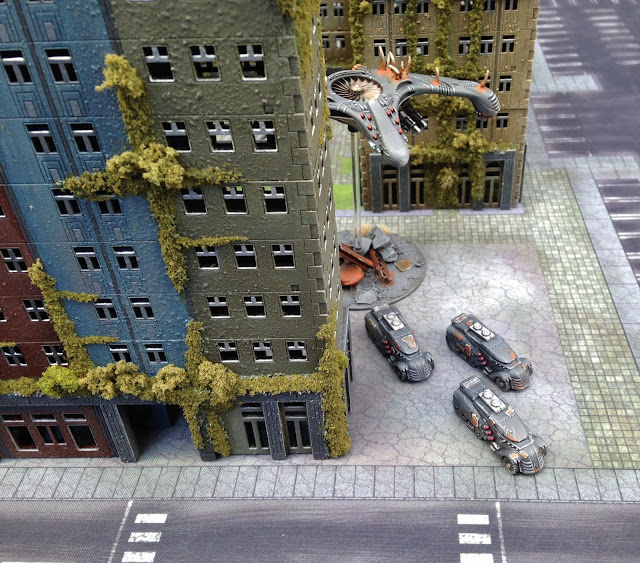 This weekend myself and Adam attended our third Coastal Assault tournament in Brighton, another chance for my Resistance to shine while Adam tried out his new Shaltari army for the first time. After a long period just playing Adam (I think we had three or four practise games with his Shaltari since his appearance at Winter Invasion) it was about time for some new opponents!

THE TOURNAMENT AND LIST
The tournament itself had eighteen players, with the missions announced about a week before - though Adam and I only found them out that morning! Military Complex, Bunker Assault and Careful Advance - Objectives, Focal Points and Critical Locations. Cool! All three were missions I had played before, and was confident my list would be okay aside from Bunker Assault - this is a mission I have always struggled with as my CQB potential is poor and I have no flamethrowers. Nonetheless, my demolition crews didn't care about Armour 8 buildings, the list had a lot of ground pounders for Focal Points, and both speed and staying power for the Critical Locations, so I'm sure I would work something out.

The spread of different Factions was largely even - four PHR. three UCM, six Resistance, three Scourge and two Shaltari. A lot of Resistance, all running Typhoons and Thunderstorm Customs. Yikes.

The players were largely familiar faces, though a good number were people I had not faced before. 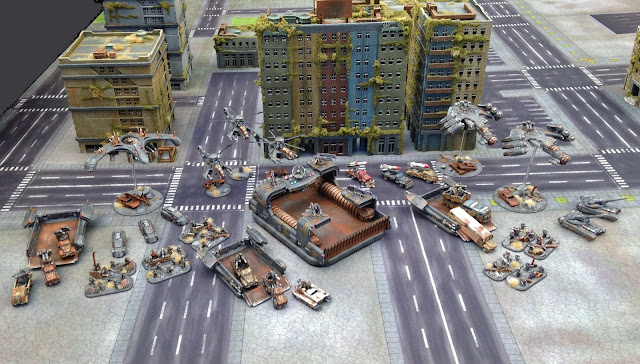 GAME ONE - MILITARY COMPLEX
My first match was drawn against Allied Resistance in the hands of Polish Tom, who was running a list a little different to mine. Thunderstorm Custom, two pairs of Typhoons, Zhukovs, Gun Wagons and other Kraken-mounted trucks, a pair of Archangel Pathfinders and crucially, only one group of infantry in a Lifthawk.

Tom spent the start of the game struggling as my forces got the jump on him - two of the Typhoons were brought down early, his Zhukovs suffered the attentions of my Thunder Wagons and the infantry in his back Objective were obliterated by Falling Masonry. In turn, he destroyed my home Objective and killed all of my bus-mounted infantry, leaving the Lifthawk-mounted infantry to save the day.

Tom's anti-air units were gone (aside from the Archangels) allowing my forces surround and brutalise the survivors. In the end his force was gutted and the field was mine, but I had lost all of my aerial units to his Archangels (they were seriously impressive - two Lifthawks and three Typhoons between them!). Two Objectives in hand and a small bonus from the Kill Points left it a 13-7 VICTORY.

GAME TWO - BUNKER ASSAULT
My next match was against the Scourge of Amit, another player I had not faced yet. Bunker Assault against Scourge (with their speed and awesome close-combat troops) is not something I favour, but this time it went rather well.

I deployed defensively, while Amit committed early with his Reaver Gunships and Screamer/Raider down one flank. They were positioned too far forward, and I rolled well with the Gun Wagons and Zhukovs - two Gunships destroyed and the Raider down to one Hit Point on Turn Two. Things did not improve as the Typhoons cut down the Screamer, then turned on the Reapers and destroyed two of them. The third followed in the next turn, leaving Amit's anti-air in the hands of Overseer and a handful of Minders.

The Thunderstorm took the other flank with a unit of Gun Wagons, culling the floating Monitors and Minders while the Commander destroyed two Hunters. A lucky Thunder Wagon rocket finished the third, and his ground forces were gone.

My dice continued in this vein, and by the fourth turn I was feeling bad for Amit. Every shot was a hit, every damage roll doubled. Where he had positioned aerial units above my own (hoping to cause damage on those below if they were destroyed), I rolled sixes and they exploded in the air. His own shots against my forces were average, but there were simply not enough as I had taken out his heavy-hitters early.

At the end I had restricted the Scourge firepower and cut down their transports, leaving their battleplan in the final turns severely limited. His infantry were trapped in their bunkers, unable to react. Holding the initiative, I dominated the central Bunker with some late-arriving infantry, contested his home Bunkers and held my own uncontested - Amit simply did not have any units left to approach my deployment zone.

The game ended with a 15-5 VICTORY after applying Kill Point bonus, a vicious win where the dice were on my side the entire time.

GAME THREE - CAREFUL ADVANCE
The last match of the day was drawn against Stephen and his Feral Resistance - strangely enough I had played Stephen's Resistance at the last Coastal Assault, in the same mission. It had ended 17-3 before, could I match that?

It turns out, yes. Dave's list was similar to mine aside from Berserkers in a Skulltaker and some Scout ATVs instead of the Barrel Bomber and bus-mounted infantry, and he was also only running two Typhoons. He started the match throwing the Berserkers toward the central Objective buildings, which I swiftly destroyed with my Thunderstorm Custom and Typhoons. Exposed and with only the Critical Location on the right to head for, his Skulltaker advanced... into the teeth of almost my entire force. Denied the safety of a nearby building (courtesy of the Barrel Bomber), they were destroyed by the Zhukovs.

The game was all but won, and Stephen had sadly realised this. He made strong efforts to curtail the amount of points I was wracking up, but in the end his force was shattered and I had a strong finish.

The final score left it a 19-1 VICTORY. It was a brutal game, as Stephen found himself outdone by my positioning and speed in reaching the Critical Locations first. Some key initiative rolls and timing allowed me to hold the advantage the entire game, and in the end it left me with a big win on the last game of the tournament!

RESULTS
At the end of Game Three I realised that I had a very good score, and after the games were finished I was drawing with Dan on forty seven points. Holy £$%* I could win this...

Alas, it was not to be. Second overall. The tournament organiser has an interesting way of working out ties - the strength of our opponents. I had scored more Kill Points, but Dan had had stronger opponents, so the win fell to him - a really good system that I like a lot. It didn't work out in my favour, but I appreciate that this is a really good way to settle things. 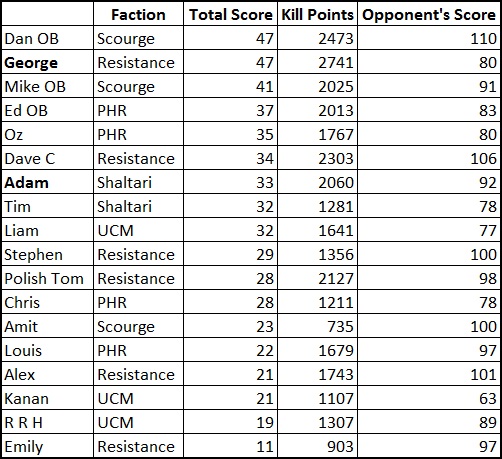 My dreams shattered. Orbital Bombardment continue their dominance of the tournament scene. I cannot quit Dropzone Commander yet...

I kid, I kid... big congratulations to Dan for winning the tournament! Well deserved. I cannot grudge him, he is a better player and looks like he had some tough games - I'm sure if I had played any of his opponents I would have been smashed.

Nonetheless, it feels good to achieve such a result! Probably one of my best tournament placings in my entire tournament career - only Infinity and some Warhammer 40,000 tournaments in ages past can match it. It certainly feels good after not playing much, and has given both Adam and myself a lot of impetus to cracking on with some Dropfleet.

Best Painted went to Tim and his lovely Shaltari, with their extreme white/blue/purple scheme. Lots of love for that army.

I know Adam is fairly pleased with his performance and the overall feel of his Shaltari, but I'll leave him to speak about that.