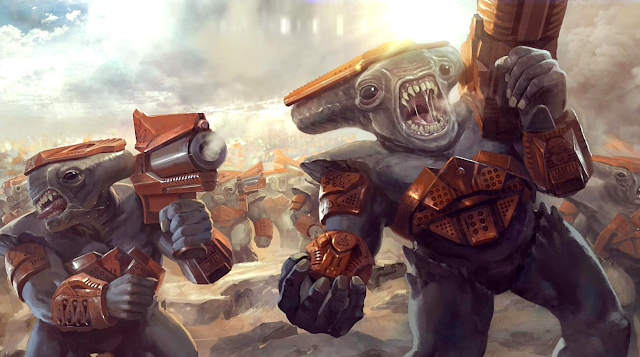 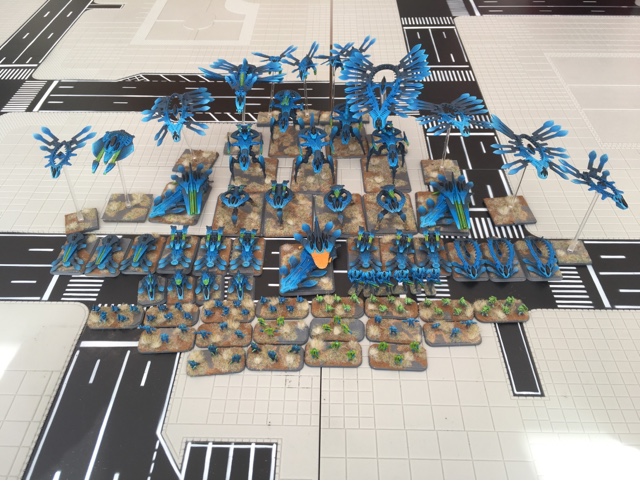 George a few times has tried to persuade me to do a post about my Shaltari for Dropzone, and I finally have the time to do so.

Sadly both local shops carrying Dropzone Commander have cut back (one only has the starter boxes and one has completely cleared it), but on the bright side it meant I picked up most of this really cheap when they were doing their clearance (except the walkers, picked those big boys up at Invasion). 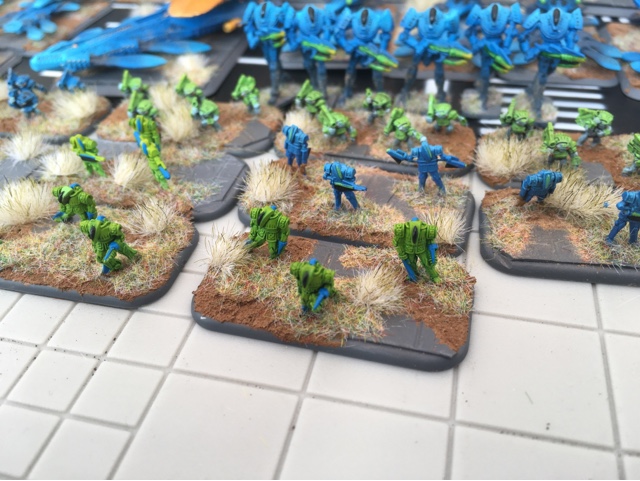 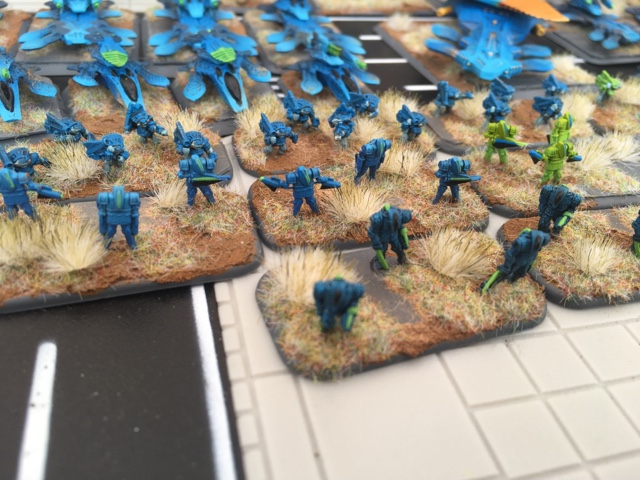 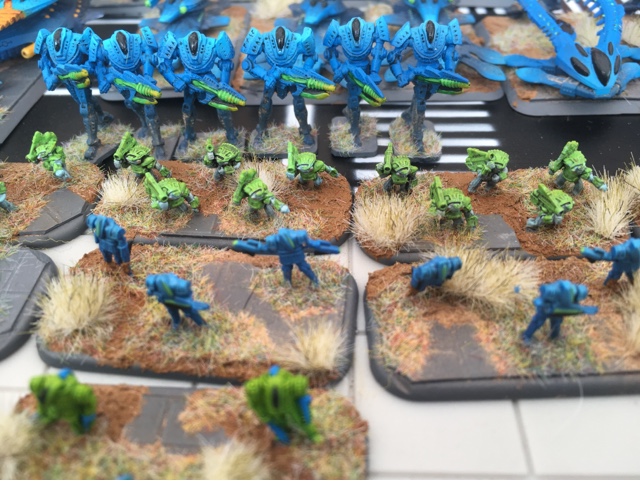 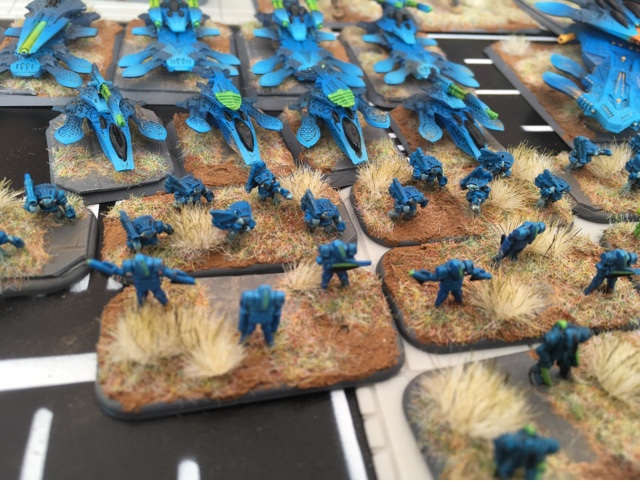 So here is the army! First up out my infantry, the Braves are from the starter box, I did them in both blue and green so I could more easily differentiate them on the table. The Firstborn are one of my favourite units - though I'm less keen on their special ability as I've never found it beneficial to remove enemy attacks - perhaps against Eviscerators it might be more worthwhile. Finally Pungari, shed loads of them - I love these chaps, great for finding objectives! 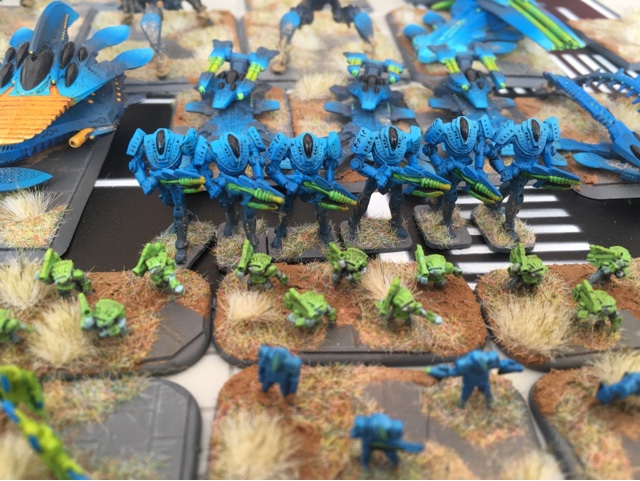 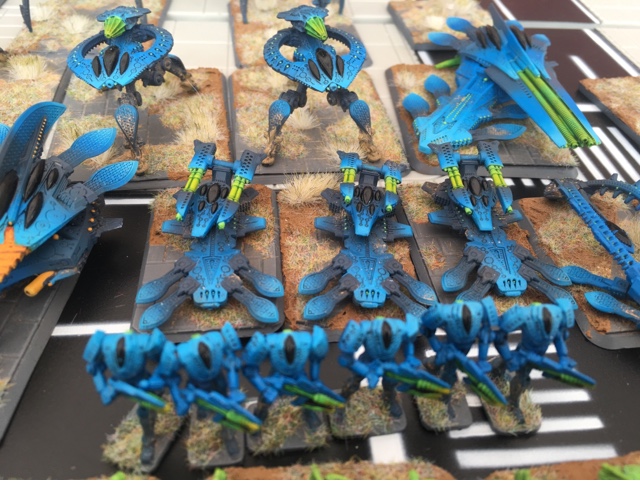 Next up are my scout units - I have to say that both of them have been fairly infrequently used (the Samauri not at all!) but it's always nice to have the option! 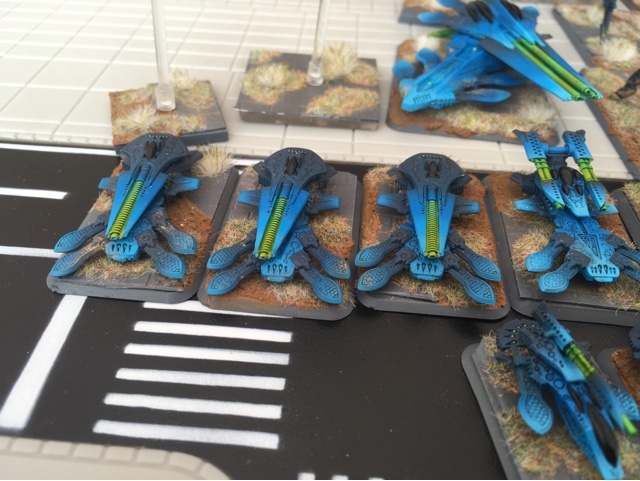 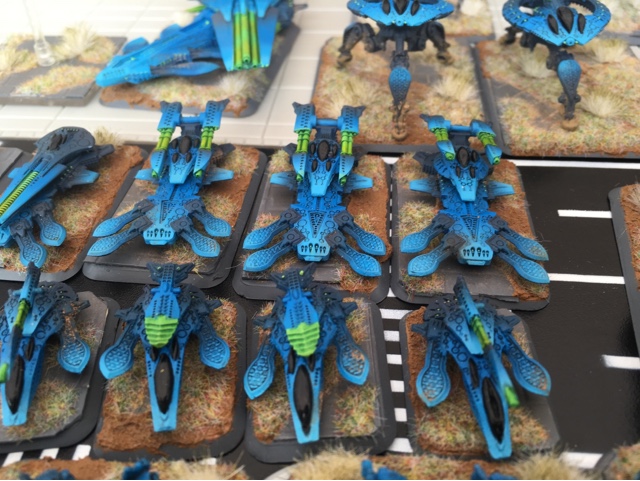 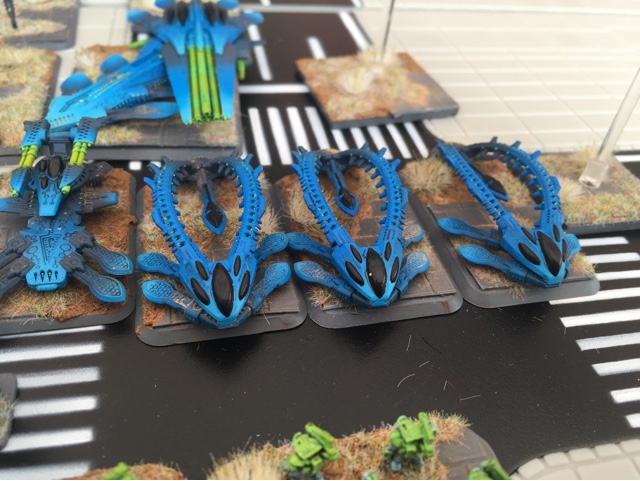 Next up are my skimmers - most are from the starter box - I'm strangely less keen on them than the resin skimmers (they took the black enamel better than the plastic!). 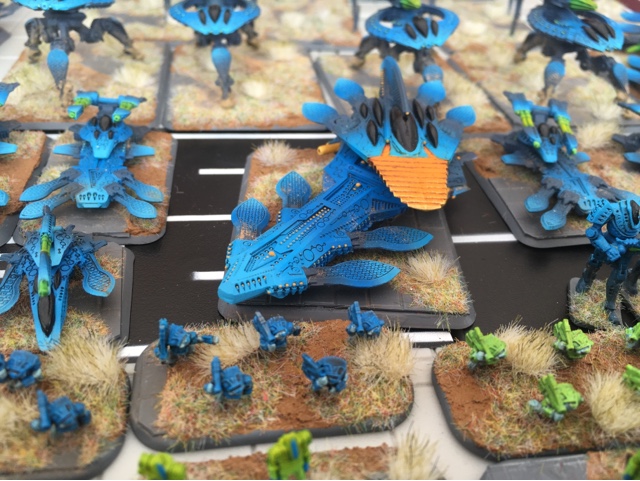 The other skimmers are some of my favourite/least favourite - the Caiman I think look awesome, I was really happy how they came out, and in game the Caiman is wonderfully versatile with the ability to drive on or drop. The Gharial I wanted to do in a different colour to mark it out as the leader - I regret that now! Also in game terms I always find that the short range leads to its demise! 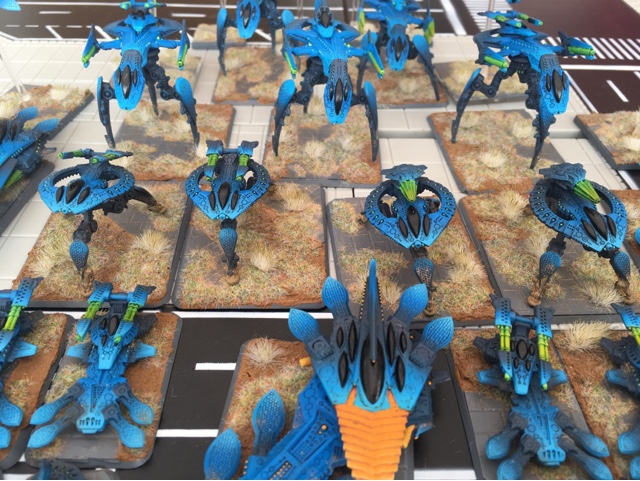 The Tarantula and Bird Eaters were the first models I did - and I love their look, it's what really made me decide to get more walkers. Speaking of which my big walkers, love using them as a great big brick - so much fun! The Panther is also a great psychological unit - which pairs very well with the next unit - the Warspear. 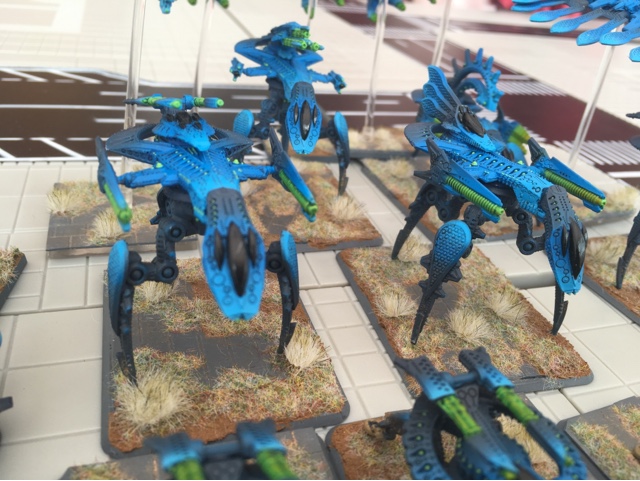 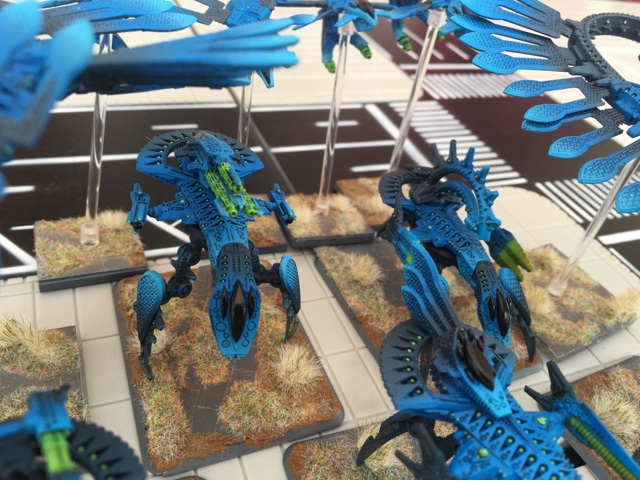 The Warspear has been a revelation- it has only once disappointed - but often it's been absolutely beautiful! Taking out all manner of enemy units (including King Crow) with it hitting the rear areas and the Panther causing area denial - it's a great combination. 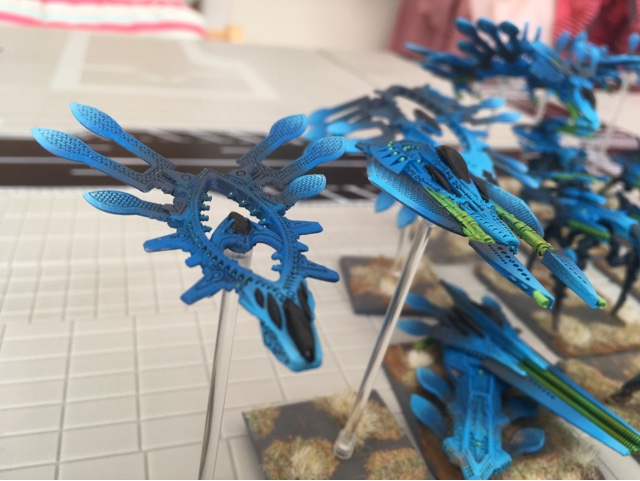 The other aerial units I have are both great, the Firedrake is fantastic as one of the few templates I can get access to and the Firebirds are designed to take on PHR and Resistance vehicles. 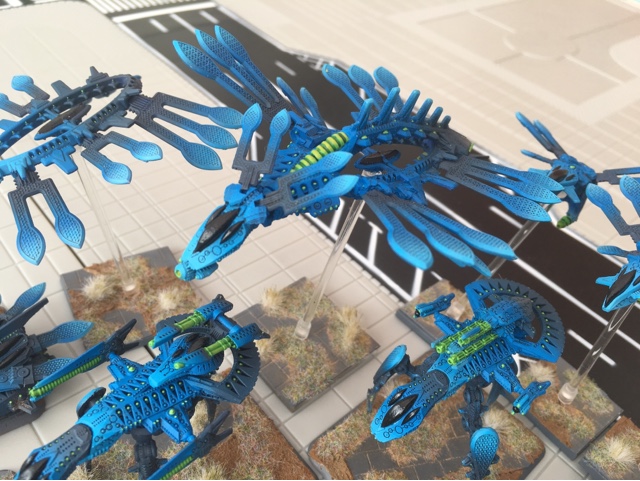 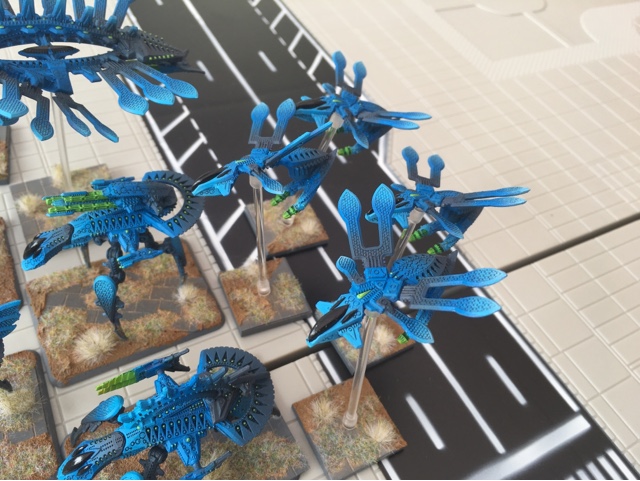 So that's the army, I've of course just picked up a Scorpion (typical to be announced just as I finish the army) and I may well pick up a totem too when I do paint it - as they look useful!