ANOTHER TRIUMPHANT RETURN TO INFINITY 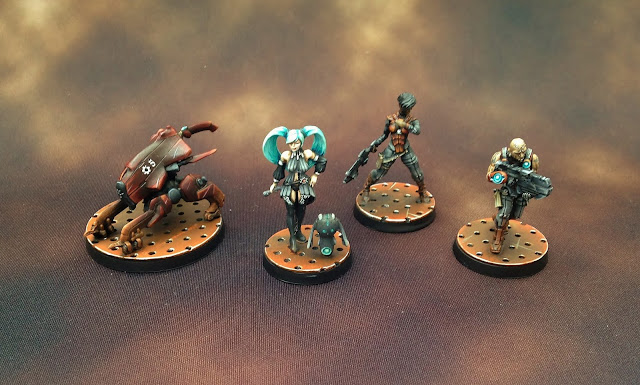 After many months I have ended my mini-break from Infinity and returned to the Human Sphere. Inspired by the opening of a new gaming store (even closer to my home!) and an emerging Infinity community (featuring some familiar faces, and some new!) the Jurisdictional Command of Corregidor have deployed their infamous mercenaries once more.

So what does this mean hobby wise? Obviously I've been hitting the games hard, with six games in the past few weeks, but painting and modelling wise I have been concentrating on updating the High Rollers - specifically some conversions for a new, bigger and better Wildcat Link Team, a TAG and some more unsavoury mercenaries like the Fat Yuan Yuan! More to follow on them when I get some paint on them,

The biggest job has been "rebasing" most of the team - I have became increasingly unhappy with the green on the bases, and decided they needed a second look. Discarding the idea of rebasing the entire force entirely, I focused on salvaging the existing bases with a new scheme - something closer to th studio's orange rust scheme. This will sit nicely with the red armour and should be easy to keep consistent across the force. So far I have repainted a handful of models - I think another thirty or so remain...