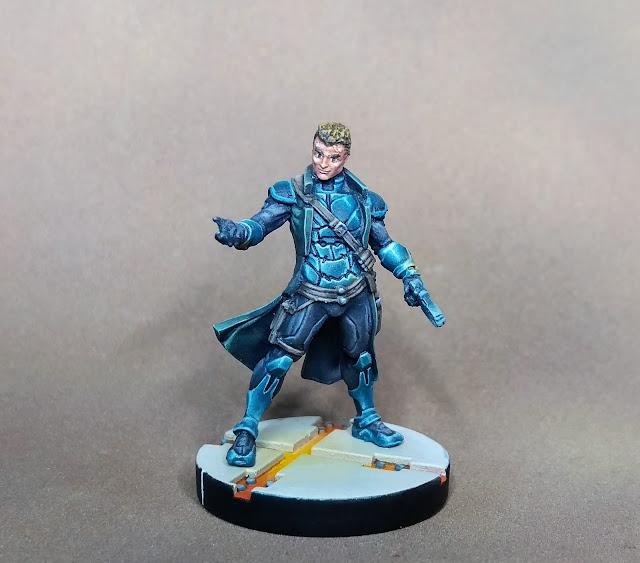 If you read my last post you'll know that I was in serious in preparation for my attendance to the SCTS VIII tournament.  Myself and the rest of the local crew have been practising the three missions; Nimbus Zone, Highly Classified and Capture & Protect.

The main lessons I've had to learn are to do with deployment and list building... oh and not doing anything dumb... still working on that one.

Game One - Nimbus Zone
I lost the initiative roll, my opponent elected to take first turn and I deployed second.  My opponent ran a Chasseur up a flank, managing to avoid my attempts to Discover and hit the Myrmidon Link Team with a Flamethrower...oh dear, so much for deploying better.  My Spitfire guy died attempting to engage, but the others managed to Dodge.  The Chasseur went down to a pistol shot from Thamyris. After that my opponents dice decided to fail him miserably, but trying Speculative Fire shots from a Tractor Mul doesn't usually work out. He decided to destroy a Nimbus Antenna and I reminded him that that would not count as disconnecting.

In my turn I moved up, disconnected two Nimbus Antennae, then the Dactyl Link ran forward and D-charged the designated building.  Damn, I'm on to a winner with more disconnected antennas and my Classified achieved.

Turn Two saw my opponents plan unfold in the shape of Duroc and Margot. Having never played the French before I hadn't known to expect them. Thorakitai to the rescue, 360-Visors... so good.  My opponents dice were unkind and a plethora of SMG shots from the Thorakitai Link put Duroc down. My opponent re-purposed his Moblot Link Team, coming through a building to sneak up on the Thorakitai.  Sixth Sense L2 and 360 Visors... that's not going to happen. What followed next was a most bizarre exchange of Chain Rifle shots and Dodges and nothing dying.

In my turn I turned on the pain but started to leak Thorakitai (including Thrasymedes) to do it. The Moblot Link Team was effectively dealt with and what I didn't kill the 112 (Doctor) finished off for me.  I also took the time to download a data-pack.

I finished things off with a cheeky close combat between Machaon and the 112. I doctored Thrasymedes back to health then downloaded two more datapacks and had Specialists in base contact with the consoles.

Holy smokes, I'm at the top!!! That's not right.  My opponents dice really were bad, that Flamethrower should have hurt my Myrmidons more. Duroc should have hurt my Thorakitai more and the Moblot Link Team should have been able to do more. I didn't do too much wrong though except the initial Myrmidon conga-line. 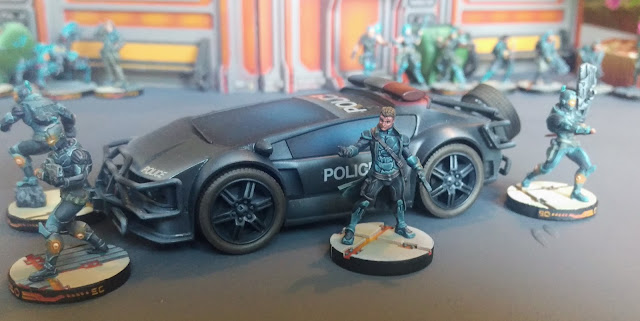 Game Two - Highly Classified
I was facing another Ariadna list, but this time it was the Scots.  I won the initiative roll off and chose deployment - my opponent took first turn.  I set up lots of ARO traps as I knew there'd be a tonne of Impetuous moves. There was movement, bit of shooting... not much. In return I went to kill some Galwegians and failed... those six point bloody Chain Rifling, berserking bastards. They just wouldn't die and pretty much took my four Thorakitai out. My right flank was devastated by them. I managed to kill the Druze Hacker, which mean he couldn't achieve two objectives, but he had made a made dash and managed to Sabotage a building. I had managed to Forward Observe before the Thorakitai died and thanks to Acmon taking a hit, I managed to Doctor him up, securing my secondary Classified Objective. I then made a huge mistake, with a couple of orders remaining, I moved the Repeater bot out, failing to notice some AROs he'd get from performing a second move and he went down. I managed to follow this up with a second dumbass mistake and move Thamyris out, throwing a pitcher... good, but leaving him in harm's way... bad.

Turn Two my opponent obligingly took Thamyris out (three days later, I realise Thamyris has No Wound Incapacitation...arrrrrrrhhhhhhh...), then proceeded to remove my Myrmidon Link Team one by one.  The amount of Impetuous orders, Co-ordinated orders (plus freebie from Willy Wallace) was more than I could follow and I just had to hope my opponent was honest with the number of Orders he spent and didn't make any mistakes. He seemed like a sound bloke, so I don't really think I have any need to worry.  I screwed up some ARO decisions, Dodging when I should have popped Smoke... damn.

In my turn I was really concerned with how I could get a draw, no chance  of a win now.  I saw one opportunity, which was to Doctor up Thamyris and achieve Data Scan.  My opponent had me well pinned with lots of Suppressing Fire so that didn't happen.

Turn Three was basically mopping up.  He had two Classifieds, plus his own secret Objective.  I had one Classified and my own Objective.

I got greedy in my first turn, Galwegians are <bleepppppp> and I really need to be careful about declaring a second move.

Game Three - Capture and Protect
Oh boy, I drew Pete my sparring partner, Ariadna again, but Vanilla this time. We'd practiced this mission just two days before and that had been a Draw, basically the same lists, with minor tweaking.

Pete won the roll and chose to go first, just like our last game.  I deployed covering my beacon in a tonne of ARO. Pete had made a mistake deploying Uxia in Line-of-fire of a Thorkitai, and despite five dice with Surprise Shot, my Thorakitai put Uxia down. Pete was really unhappy with this so the gloves came off. A Sniper took Thrasymedes out, despite his ODD, then it was mostly moving about and laying mines (well, camo tokens) 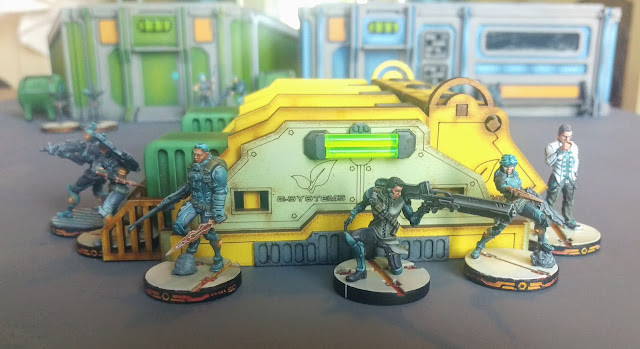 In my turn I played Smoke and Multi-Spectral Visor L2 games, but somehow managed to miss a lot and Pete simply moved into total cover.  He did take an HMG dude out, which was pretty good, but I'd burned most of my Orders to do it. Time to haul ass. I made the same mistakes as in my last game, got greedy and managed to second move my Myrmidon Officer into range of a mine... she died, which meant connecting the console was going to be really tough.

Pete went for a out-flanking manoeuvre, which cost a tonne of Orders and only partially succeeded, sending one of my Thorakitai Unconscious.  I took that little flanker out with the Myrmidon and doctored the Thorakitai to life.  I sent the Myrmidons in to a building to deal with a Suppressing Fire, Minelaying, Infiltrating thingy.

Turn Three saw Pete trying to take out my Myrmidons with a combination of mines and a Blackjack, I tied the Blackjack up with an engage move and lost Combi-rifle Myrmidon to a mine. Eudoros was in striking range of the beacon, but I still hadn't connected that console. I had to move-move a Thorakitai (my doctor was Blind thanks to a Flash pulse from a Warcor), up to the console... three orders, then it took four attempts to WIP the stupid thing.  With my final order I moved into range of Pete's HVT, securing the win.

Ouch, that was a tough-as-nails game. Normally we're quite forgiving when it comes to "oh, I didn't realise I'd get an ARO there" or "ooops, I didn't mean to move within range of that mine", but not this time. I actually said to Pete, that from now on I want to play like that, I need to learn from my mistakes and NOT have them forgiven and take backs allowed. 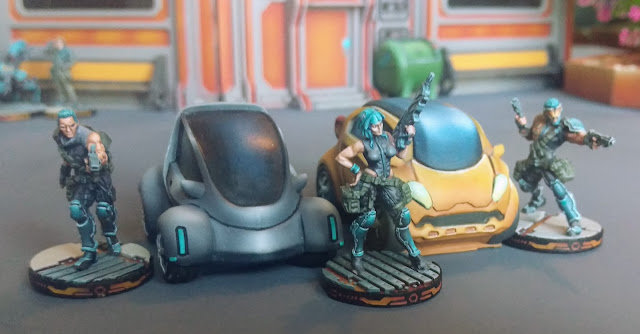 Results
With a few Tournament Points and a healthy amount of Victory Points, I secured 5th place out of 18. This is amazing for me, I've never placed that high before and actually winning a prize for that was staggering. I'm not really a results-driven person, I actually care more about how I perform. I definitely made some mistakes, which boil down to being hasty, but on the whole I feel my game play has improved a tonne since I started playing regularly this year.

I also drew for best painted with five votes each. It's a bit annoying that not everyone voted, but I don't have much faith in how well Best Painted competitions are run. Typically people vote for their mates and don't bother actually going to view and decide which army is the best painted. 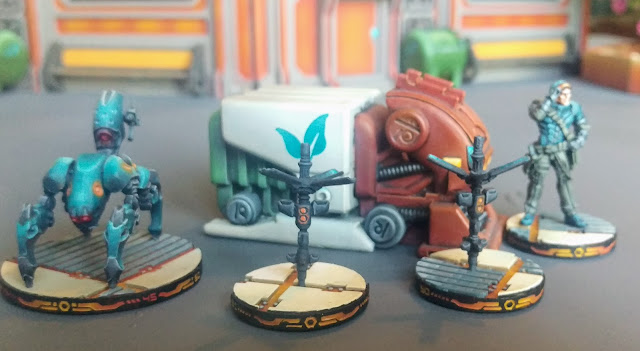 There was also a competition for Best Terrain, which I also managed to clinch.  Apparently some people walked in off the street and were all "woah, what's this about?" which led to some intro games being arranged. Nonetheless, I desperately need some advertising or crash barriers on the sides of the roads to provide some Line-of-fire blocks.  Seemingly, a Maghariba Guard sat on the road and owned it... and we can't have that!

I intend to enter SCTS IX in August, but between now and then there's Operation Wotan to be involved in.  I also hope I can get some more figures painted, so I'm not turning up with unpainted stuff, eurghh! 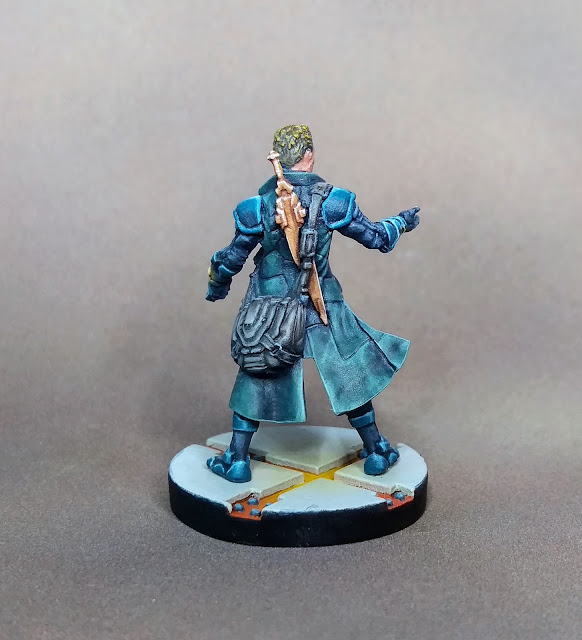