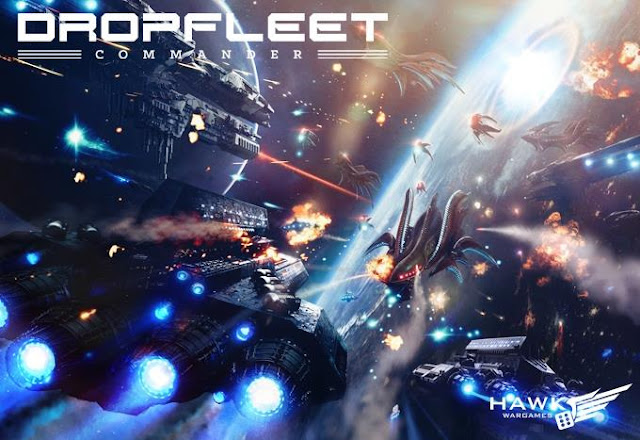 For all my misgivings about Kickstarter and the horror of backing Alien Versus Predator, I have fallen to flashy advertising, pretty pictures and awesome stretch goals for the new game by Hawk Wargames - Dropfleet Commander. Here's a direct link to the Kickstarter.
Mentioned many times in the past on this blog, this game has been lurking in the background for a long time now, making brief appearances at Open Days and shows, with tidbits of information and renders appearing on the internet seemingly at random. I feel like half the people I know got into Dropzone Commander just so they had an easy entry to Dropfleet... myself included.
I have always loved Battlefleet Gothic, the old Specialist Game from Games Workshop back in the Golden Age of Warhammer. After it passed into history, searching for something to scratch that spaceship-shaped itch led me to Dystopian Wars and Firestorm Armada, and though I love Dystopian Wars more than many, it is a somewhat different beast.

Dropfleet Commander promises to be somewhat different as well, set in close orbit with battlefields that show the surface of a single world rather than a huge starscape. Information about the game is intriguing, but still fairly light, even though I heard the designer himself speaking at Autumn Invasion about it. The miniatures alone sold me on the game, and as the Kickstarter plays out, we see more and more pictures with greater detail and more information. It looks mouth-watering to me.
Of course I am tempted by the UCM with their gun-on-guns aesthetic and Sulaco-style militaristic simplicity, but the Scourge are growing on me by the second and I think I could pull off a nice seashell-like, mottled pattern. Maybe I will have to work out how to use an airbrush too!
The Kickstarter finishes at the end of November and aims to ship in June 2016.