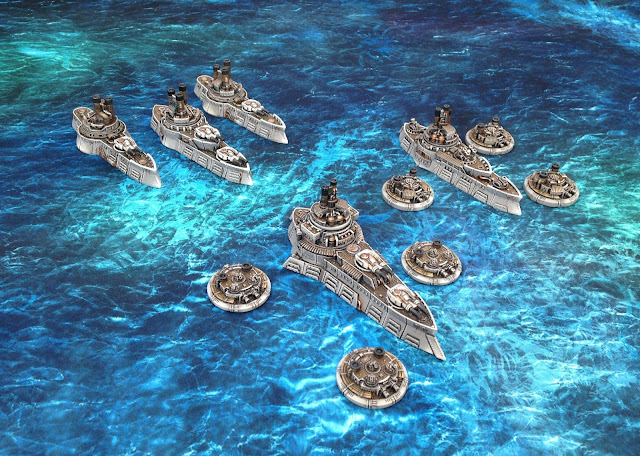 Since painting the Moskva-class Dreadnought last week, I have been busy painting a few more ships for the Russian Coalition - namely the vessels needed for the Rogatina Squadron (comprised of one Azov-class Battle Cruiser and three Veliky-class Escorts) and the Shashka Squadron - one Tiksi-class Support Cruiser and three Novgorod-class Frigates. The third specialist squadron available for the White Navy is the Pevek Cruiser Squadron (one Tambov-class Gunship and two Suvorov-class Cruisers), but I already had these models painted.
The Escorts and Frigates are the first of the circular-style vessels I have painted for the Russians (bar the pill-shaped Nikel-class Heavy Frigates) and I think they have turned out quite well. I avoided using them in the past as I was not a fan of the models, but having painted them they have grown on me a great deal. Obviously in the game they are very good - so good they were nerfed in the most recent update, but their weaponry remains potent and manoeuvrability unparalleled.
The Tiksi-class Support Carrier brings more mortars to the fleet, an area I have tended to shun in favour of turrets and boarding. The Russian fleet has huge potential for long-range bombardment, and with the recent changes to the rules for the fleet, it is a more attractive choice than ever. I will be running the Shashka Squadron for a time, and then get around to painting the full squadron of Support Cruisers for maximum bombardment.
This brings the White Navy up to 2,800pts without upgrades, making it one of my largest painted fleets. Looking over my collection, I have roughly another 1,000pts worth of models to paint for the Russians, and with Crew upgrades and Generators, this would make the grand total 4,000pts without any Allies or Mercenaries. Quite the force! Whether I use it all at the same time is something to ponder for the future.
Thanks for reading,