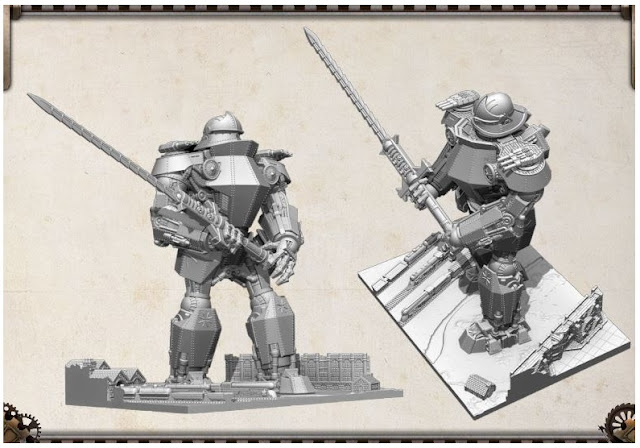 Some weeks after the rules were released, the Hochmeister-class Dreadnought-Robot strides into battle. We can all be impressed with the massive size and spectacle of a Robot with a lightning-sword, but how do the stats stack up? Not just a monster on the field of battle, the Hochmeister comes with a variety of options that will give Prussian players a lot to think about. Will it be worth fielding, or will that extortionate points cost drag down the rest of the fleet? Spoilers... I think YES IT WILL.

INVESTMENT
Sitting pretty at 350pts with a 150pt Strategic Objective tax, this model is not cheap, and beats out the majority of Core Nation Dreadnoughts by a solid margin. The Blitzschlag-Zweihander Sword upgrade adds a further 30pts to the value - ouch! Unless you're playing a very large game, this will be a centrepiece of the force and make you consider whether you really need that second Elbe-class Fleet Carrier...

DEFENSIVE
The Hochmeister carries heavy armour, giving it DR8, CR12 and Rugged Construction (2). comparable with the Blucher-class Dreadnought. HP10 should be able to last a while, but my gut feeling is this model will be brought down with lots of small shooting attacks rather than a big critical result - the high CR and Rugged Construction will see anything short of a full squadron Linking together fail. AA and CC6 will help against enemy bombers and torpedoes, but it will still suffer if left exposed.

The option to take a Guardian Generator (2) is surprisingly tempting, as this will give great protection for everything around it as well as obviously stacking with itself. At this early stage I do not think I will take the option as I want to run the big guns, but I consider it an effective choice amid your fleet or in support of other Robots like the Metzger.

Looking at the paper, I think losing the Main Turrets is a worthwhile decision. Either swap one for a Guardian Generator and run as fast as you can towards the opposing Large vessels, or swap them for Speerschleuders and start casting lightning in every direction.

Though lacking in RB4 and losing strength comparatively at closer range, the Speerschleuders do not suffer the Primary penalty at RB1, offer equal strength at longer ranges, can Link together, and have all the benefits of Tesla weaponry. If taking them did not cause the Tesla Generator to go offline, the choice would have been easy!

BOARDING
Carrying an AP value of 15 and combined with the Hull Breaker, Crushing Impact and Terrifying, the Hochmeister is built for smashing. Undamaged, and in combination with either the Donnersturm Maces or the Blitzschlag-Zweihander Sword, the Robot should be able to cause serious damage to any Large or Massive model in one round of combat. Combined with the firepower above, you should be to able to cripple a ship with 8 or more HP very quickly.

The Robot is slow, and will probably only be able to get into base contact once or twice per game against a canny opponent - perhaps even less so against a particularly reserved FSA or Covenant player. This is why I would favour packing as much firepower onto the model as possible, even at the expense of the Tesla Generator. The 2" extra (on average) per turn is useful, but I think if you're clever with deployment and screening, you won't need it. Obviously I will need to playtest this myself before I can issue a final, sweeping solution to this debate!

UPGRADES AND OPTIONS
TURRETS AND GENERATORS
The Hochmeister starts with a pair of powerful Main Turrets, but you have the option to swap them for a pair of Speerschleuder Turrets that can link with the arm-mounted Heavy Speerschleuders. Alongside the Blitzschlag-Zweihander Sword upgrade, all of your Tesla-weaponry suddenly gains Devastating Ordnance, but you lose the internal Tesla Generator due to the strains on the power. An interesting dilemma!

These Turrets can also be swapped for Generators, but beware that you cannot have these with the Speerschleuder Turrets, only in place of the Main Turrets.

The Calcification Generator is an interesting option, but ultimately I do not think I would want to sacrifice the firepower of the turrets. Alongside a Tesla Generator for added speed, this would boost the combat potential of the Robot, but I'm not sure it's a big enough boost.

The Guardian Generator, as mentioned above, gives the Robot some extra survivability and helps out the rest of the fleet - a great combination in the naturally Shield-deficient Prussian Navy.

The internal Tesla Generator is lost if the model upgrades the Main Turrets to Speerschleuder Turrets, and I believe this is a really great design choice by the games developers - upgrading the firepower slows the beast down and robs it of some power at close quarters. I cannot make an informed decision here, and cannot even offer an opinion. It is so important for the model to be moving forward as fast as possible, but the benefits of the Speerschleuder turrets is difficult to play down.

I will be running both options to give them a proper run, and report back my findings in time!

CLOSE COMBAT WEAPONRY
Donnersturm Maces are free, and give the Hochmeister Hull Breaker (D6) rather than D3, which is a nice bonus! Alternatively, the Blitzschlag-Zweihander Sword costs an extra 30pts but gives the Dreadnought-Robot a great deal to think about...

Firstly, it makes all Tesla weaponry and Generators count their target as having a Speerschleuder harpoon already lodged in them. This is... well, awesome, as the Hochmeister is bristling with Tesla weaponry and has the option for even more (as mentioned above).

It also allows two distinct fighting styles in combat; Zornhau which gives Devastating Ordnance to AP attacks against Large or Massive models, and Scheitelhau which allows the model to split AP attacks between the initial target and two models within 4". Both of these are brilliant, though I would hesitate to target more than two different ships at the same time unless you were fighting Small vessels.

30pts for the upgrade is a lot, but the upgrade to the Tesla weaponry alone is already almost worth it, and it looks really, really cool too! I think I will be using the Sword a lot.

PSYCHOLOGICAL WARFARE
Regardless of armament, this is a towering 350pt Robot with the statistics of a Dreadnought and a host of weaponry. It is not going to be ignored! Make sure it is in a position where it cannot be isolated or stranded out of range, and run forward as fast as possible. If it's not carving the enemy flagship in two and sending everything else running for the open sea,you've wasted your points.
I'm looking forward to running this monster in an upcoming Battle Report - will he carve a Dreadnought in half? I hope so!