The Prince of New Troy 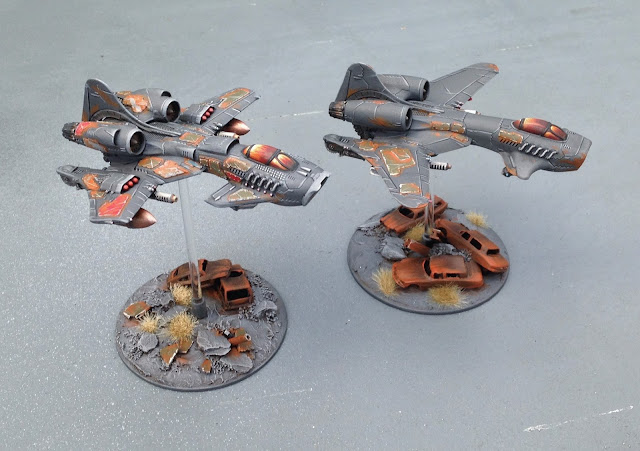 Karl Foley, Prince of New Troy screams overhead in his modified J-19 Hellhog, finally receiving the paintjob he deserves after months of sitting on my painting table, silently judging. Busy with detail but still carrying all the best parts of the J-19 Hellhog model, this was a nice and quick model to paint, allowing me to use a few colours not usually seen on the Resistance to mark him out as something special.

Rules-wise, he is a beast - a Fast Moving Allied Commander with an incredible CV value and a mount that is frustratingly difficult to bring down without some serious luck. Just watch out for dedicated killers like the Zhukovs! Below I will talk about some his special rules and the specific Command Cards he adds to the deck.
SPECIAL RULES
FOLEY'S FEARLESS
For an additional price, other Hellhog's in Foley's force gain Evasive Countermeasures and may be taken in pairs - a very attractive choice! Anything that can make them survive a little longer is worth it, though I would probably not want to take a pair of them together unless I was driven to by the inclusion of Allied Pathfinders.

AERIAL COMMANDER
Almost uniquely, Karl Foley is mounted on a Fast Mover. To make up for this potentially awful situation, he automatically arrives on Turn Two and counts as being on the board for Command Cards and Initiative. His Sphere of Influence is limited by his presence (meaning he may need to Transition to Hover Mode), but there is a useful Command Card to counteract this...

FRIEND OF THE UCM
Due to his connections with the UCM, Marine Force Recon and Pathfinders both receive a small reduction in cost - this should offset the increase on the Hellhogs, which is nice!

FOLEY'S HELLHOG
Foley rides into battle in a modified J-19 Hellhog, armed with Extra Ammo for the Satan Chainguns and a Compact UCM Missile System - two E7 AA shots with great accuracy but a relatively short range. The jumpjet also has a higher armour value and Evasive Countermeasures, enabling it to survive a LOT more punishment than the average Hellhog.

The vehicle alone is incredibly useful, regardless of Foley's Command Cards and Command Value, and would cause trouble for a lot of my opponents!

COMBINED ASSAULT
This card effectively allows two Battlegroups to activate at the same time, so long as one of them contains Wagons or Technicals. Beautiful! The possible combinations are pretty nasty here, and I am already considering building lists around the possibility of drawing this card - two big Battlegroups should be able to deliver a killing blow at the right time!

FOLEY'S FORTUNE
This card allows a single re-roll at any time during the turn - potentially very, very useful (Fast Movers?)but not game breaking as it is only a single die.

HONORARY GENERAL
Upon activating Foley's Command Battlegroup, all Allied units may also activate. Another card that messes around with Activation order is always welcome for the chaos it causes, but this card does require you to consider taking some Allied units.

COMMAND FROM ON HIGH
Command Cards that require Sphere of Influence become Global - perfect for when Foley is off the board. Useful, but again situational.

So there we are, my second Special Commander for the Resistance and a second Hellhog for those very large games. Of all the Commanders, Karl Foley is the one who interests me the most on his rules alone, and luckily the model is nice too. I hope to use him soon and cause some chaos!