LOOKING AT YET ANOTHER SYSTEM - MARVEL UNIVERSE MINIATURES GAME 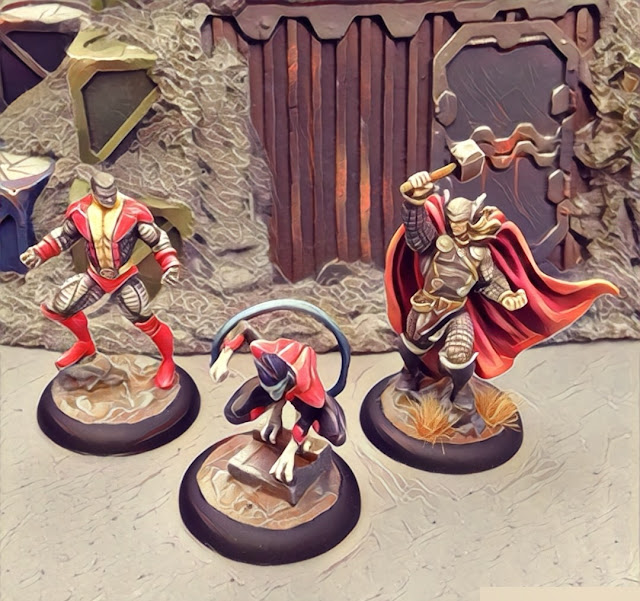 The past few weeks have seen a lot of "random" painting on my part - some Dropzone Commander, some Dystopian Wars, even Alien versus Predator got in on the action. Rather than focus my efforts, I've gone and bought a tonne of new models and started painting up yet another skirmish system - the Marvel Universe Miniatures Game - specifically the X-Men!

"But George, don't you have enough projects? What about Dropfleet coming soon? And Fleet Action for Dystopian Wars, and the Batman game, and..."

Erm, yeah. I've been looking at the Marvel Universe Miniatures Game for a long while, and with the latest model releases for the X-Men I thought it was about time to dive in. I've got some painting time freed up in the coming weeks, and thought it would be quick and easy for me to finish the eight or so models released so far. I got excited after the release of X-Men Apocalypse (which was... fine) and fired up some of the old cartoons (still great) over a lunch time to give me inspiration. The bold colours, the relatively low number of models and the cool, cinematic setting all made me resolve to paint them up quick and learn an easy new system.

The models are really, really nice. Good detail and size, well proportioned and not too many parts for easy construction. Unfortunately they are pretty bad for mould lines and flash - things like the tail of Nightcrawler or the claws of Wolverine can be a nightmare to clean! I did my best but have missed some things that only because apparent after I began painting. This is a terrible feeling.

Painting-wise, I have finished Nightcrawler and Colossus, two of my favourites. The primary colours were a nightmare, and Colossus did receive a bath in paint stripper, but I am pleased with them now. Extreme highlights were the answer for me - almost to pure white! This will be continued through the team, giving them a very cartoon-y vibe which suits the subject matter nicely.

I have also painted Thor, but this is a gift for a colleague at work who loves Thor and Marvel movies. For now, he will be the adversary for the X-Men and a big presence in their photos. In the future I intend to invest in the Brotherhood of Mutants as the main adversaries of the X-Men.

At this point I have not played the game, but the rules look nice and simple, and I look forward to playing it soon. I would like to have more models painted up first!
Thanks for reading,