THE RESISTANCE HIT THE TOURNAMENT SCENE ONCE MORE 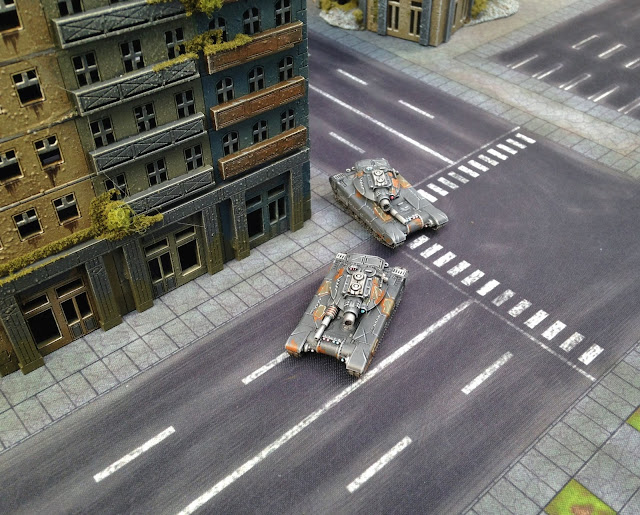 This weekend Adam and I attended a Dropzone Commander tournament in Brighton, a small sixteen-man affair (for most people) to get ready for Autumn Invasion next month. This would be the second Coastal Assault Tournament I have attended this year, and after the fun last time we were both looking forward to it. New opponents and new Factions to test ourselves against are always welcome!

THE TOURNAMENT AND LIST
The tournament itself had sixteen players, with the missions announced about a week before. Military Complex, Surging Strike and Careful Advance - Objectives, Focal Points and Critical Locations. Sweet! All three were missions I had played before, and was confident my list would be okay in all of them. My demolition crews didn't care about Armour 8 buildings, the list had a lot of ground pounders for Focal Points, and both speed and staying power for the Critical Locations.

The spread of different Factions was largely even - three PHR. three UCM, four Resistance, five Scourge and one Shaltari. Nice to see so few Shaltari as I was sweating about Panthers, but all of the Scourge players were running the new Overseers. Interesting!

There was a good number of new units from Reconquest: Phase II (myself using two units) which was nice to see. The spread of players was wide - some veterans of many tournaments, some new. Unlike the last tournament we had attended, the Orbital Bombardment crew and Hawk themselves were light on the ground.
THE TERRAIN
The eight tables present all looked good to play on and did not feature anything too outrageous - aside from a couple with some bloody big flyovers! My Thunderstorm was not looking at them too happily. I can't complain about these too much, however, as I have a set of these elevated roads on my painting table as we speak. It would be interesting to play with them for the first time.

Also present on a lot of tables were forests - something we have not used in our club games. I was looking to add some trees to my own board, so it was nice to see how they worked with the game - not bad at all! Nice to try something new.

The majority of the buildings were cardstock from the City and Ruinscape, but there was a fine selection of 4Ground, Blotz and DarkOps terrain that gave me some ideas for even more building projects. Not a huge amount was painted, unfortunately, but at least it was undercoated in appropriate colours.

GAME ONE - MILITARY COMPLEX
My first match was against Alex from Orbital Bombardment, who was using Scourge. I had played him once before, back in Autumn Invasion 2015, where I had suffered a close loss. This time I had a few more games under my belt, and was more confident with the mission. This was my third (ever!) game against Scourge.

Alex was running an Overseer, four units of Warriors and one unit of Eviscerators, a Corruptor, several units of Minders, one of Monitors, and a large formation of six Hunters, three Reapers and a massive Despoiler transport.

The game opened with the Resistance crippling the enemy home Objective building and moving aggressively forward, while Alex used the power of the Overseer to put the pressure on. After we both secured our home Objectives, the game was decided by several key moments.

Firstly, the second turn saw the Barrel Bomber survive a round of shooting from the Reapers before flattening the central building, while the Zhukovs survived six Hunters and promptly shot down the Overseer! A brutal spat of luck for the Resistance!

Later, I had spread my demolition between the left and central buildings, so Alex poured his troops into the right. They stayed for four turns and failed to find the Objective, before the Typhoons brought down that building too. In turn, I put two units into a building with only six hit points left. In a (frankly ridiculous) gamble, they survived the Scourge shooting, found the Objective and fled the table!

Luck abandoned Alex early, as his forces failed at every opportunity to damage me, while I secured two Objectives and then spent the last turns mopping up, By the end of the game, the Scourge forces had been reduced to a pair of Intruders and a handful of Monitors and Minders, while I had lost the Thunderstorm (on Turn Six!), the Barrel Bomber, a few infantry and a pair of Wagons.

4-2 Objective Points left it a 16-4 VICTORY, with a Kill Point tally of 1,420pts to 414pts. A brutal game, where a small number of dice rolls went my way and gave me a big win. I played recklessly, and was rewarded.

THUNDER WAGON WATCH - Off to a slow start, the Thunder Wagons still managed an eight point hit to an enemy-held building, and smashed apart the last Reaper. They then spent the game being chased by Monitors across the board!
GAME TWO - SURGING STRIKE
Following a big win in Game One, I found myself on Table One against a gentleman named Tim, who had scored a brutal 20-0. Ouch. He was fielding Scourge, with a similar list to Alex minus some infantry and the Corrupter, and substituting an Annihilator plus some Prowlers instead of Minders. These murderous little crabs would be my bane!

This game was almost the opposite of Game Two. My dice were appalling, as my Thunderstorm caused four points of damage to itself in the first two turns, while the rest of my force hit, but failed to cause any damage. By the time my dice turned back to normal, it was too late and the Scourge were in my deployment zone.

Small beacons of hope in the darkness were the Resistance Fighters culling two units of infantry in CQB (my only CQB of the tournament), the Barrel Bomber and Thunder Wagons blowing up six Hunters, and the Zhukov defiantly holding the central Focal Point.

Tim played spectacularly well. His Annihilator paired with the Overseer behind a building, picking off my Krakens with impunity, while the Reapers brought down the Typhoons and then ducked back to secure a Focal Point. Prowlers cut apart my Thunderstorm, using Command Cards to move with frightening speed as the Warlord tried to flee. A real low point was a lucky series of rolls seeing my infantry Lifthawk knocked out of the sky, killing all three transports and units inside with a series of 4+ rolls.

I feel that with better (average!) dice, I might have had a better chance. The first three turns were disheartening when they really could not afford to be - especially when I was hitting, but failing to damage on 2's and 3's! I doubt I would have beaten Tim with better dice... but perhaps not lost by as much!

THUNDER WAGON WATCH - landing direct hits on a pair of Hunters and a pair of Prowlers, and then securing the Focal Point at the end of the game, these Thunder Wagons did nicely!
GAME THREE - CAREFUL ADVANCE
The third match saw a Resistance civil war, as Stephen brought the Allied Resistance against me. His force consisted of an Alexander in Lifthawk, two units of Gun Wagons in Krakens, Rocket Technicals in a Kraken, Thunder Wagons, infantry in a Lifthawk, Marine Force Recon, Freeriders, two Typhoons and two Mehmeds with a Lifthawk.

I played cagily at the start, holding back as the Allied Resistance committed their forces across the Objectives and Critical Locations. We both secured our home Objectives, and I started my offensive late as the Marine Force Recon entered the central building. In Turn Two and Three Stephen had held both the Critical Locations, scoring himself a good number of Scenario Points, but I would not allow this to continue into Turn Four.

With both a Central HQ Directive and a Quick Thinking Command Card, the Feral Resistance wrenched back the initiative. Gun Wagons tried to bring down my Typhoons but were smashed in turn. The Alexander was overwhelmed by infantry with homemade RPGs while the Mehmeds and other Gun Wagons were forcibly removed by the Thunderstorm Custom. Allied Typhoons had been cut down by the Zhukovs, leaving my ground assets to move around freely.

Having destroying the Raven transport for the Marine Force Recon, Stephen was forced to abandon the building on foot, in an effort to hand off the last Objective and flee the board. The Feral Typhoons swiftly cut them down, and my infantry Lifthawk snatched the last Objective.

The game ended with both Critical Locations in my control for Turns Four, Five and Six, one Objective secured off the table and another held by my infantry. The Allied Resistance had been crippled, with only a handful of units hiding as best they could.

9-6 left it a 17-3 WIN, with Kill Points standing at 1,136pts to 122pts. It was a complete slugfest, with my own Resistance suffering a huge number of Damage Points. The Kill Point difference does not reflect that almost all of my units were down to their last Damage Points, or at least very badly damaged! I took a beating, holding back and allowing the Allied Resistance to commit before counter-attacking hard, and lucky for me, it paid off!

THUNDER WAGON WATCH - a cheeky rocket on Turn Two took his Thunder Wagons out of the game, while a second destroyed a Mehmed. Nice! Only two shots fired, as one of the trucks had been destroyed early on.
RESULTS

Fifth overall, missing out on fourth by thirty seven Kill Points! Awesome, my best tournament placing yet. I was pleased to see I finished third on Kill Points, and could have scored even more if I had been more of a bastard in the first and third games. Feral Resistance do not mess around.

Adam placed Third, as I am sure he will let you know in a future post. Well done him! My first opponent Alex won Most Sporting, and First Place went to Tim, my second opponent. Good work all round!

CONCLUSIONS AND LEARNING POINTS
I was very, very happy with the performance of the list over the day - two big wins and a loss to the overall winner of the tournament is not a bad result. Adam finishing third was very impressive, though it does continue my curse of not finishing above him in any of the tournaments we have attended! Outrageous.

Looking over the Resistance, there is nothing I would immediately want to change in the list. Perhaps the second unit of Gun Wagons is too many, but I never felt like I had too much AA in this tournament (playing Scourge will do that). For future practise games I am intending to run some more crazy crap though - stuff like the Skulltaker and Technicals need to escape the box one day soon!

Winning Best Painted was the real pleasure however, and I am chuffed. This was the first tournament for the Aegean conversion, the Thunder Wagons and the Typhoons, so it was nice to get them visible beyond the blog. I think after winning Best Painted three times with this force I will be hard-pressed to win again. Time for something new? Or just some more crazy conversions? The idea of diversifying the list to get some new, impressive models into the list is difficult as they tend to be... less powerful than the units I am currently running, and now I feel like I have a handle on the game it will be difficult to sacrifice that. Perhaps a new Faction is the answer, but I doubt I'll be able to bring as many cool conversions and play to my painting strengths with someone else. Decisions, decisions!