SHE MUST HAVE HIDDEN THE PLANS IN THE ESCAPE POD! 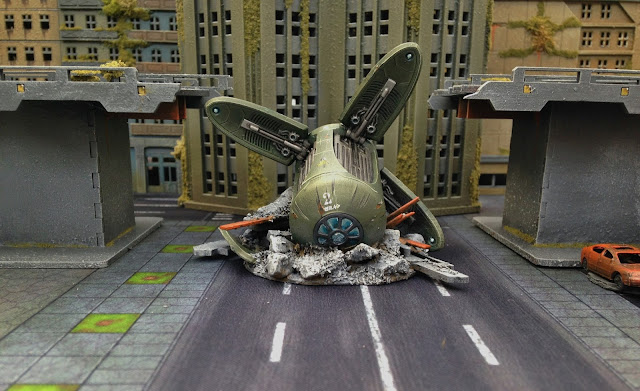 After finishing the massive Flyover road system, I decided to work on some scatter terrain for the Dropzone table - a selection of vehicles, rubble and, in this case, a massive UCM Shackleton Escape Pod!

The initial idea for the scenic base to go with the Escape Pod came when I was building the Flyover. In order to explain some of the wrecked sections of the elevated road, I wanted to model some rubble beneath, and what better explanation than an Escape Pod smashing through the road, driven off-course by enemy AA or broken guidance computer. The model itself needed a scenic base built up around it, as without one the model would look odd on the battlefield.

There was some debate about what direction to model the Escape Pod, and how to position it. In the end I decided that the "wings" or air flaps would be open, and the Pod would be on its side, smashed by impact with the Flyover. I modelled one of the flaps ripped off, as it made positioning the model easier and looked cool.

I am pleased with the final result - the paintjob is crisp and the green pleasant without distracting too much from the main event - the players' armies. The green matches the generic UCM scheme well, and the few transfers I have used give it a military feel.
Thanks for reading,