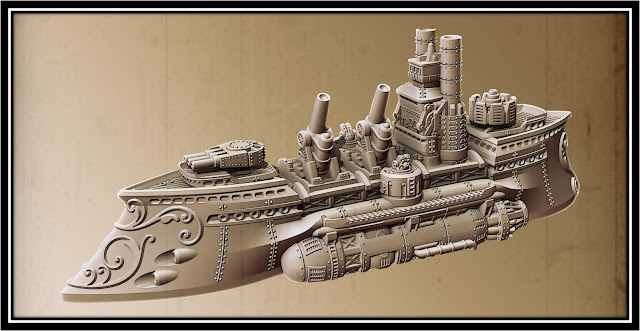 Readers of this blog may have noticed a distinct lack of Dystopian Wars in recent months, the system that dominated my painting table, my gaming table and this blog for so long. This is not fault of the game itself - I still very much admire the setting and the models, but comes from a number of different reasons.

One big reason has been the activity of Spartan themselves. Dedicating themselves to systems like Halo has been inevitable given the opportunity presented to them, and it has seemingly starved Dystopian Wars of attention.

After many months with very little movement on the forums, I had plodded along with my gaming partner Mike, recording Battle Reports for the Hunt for the Markgraf campaign and painting up some new models for that. Fleet Action offered a distraction, but around that time Mike and I both experienced changes in our schedules, and meeting for games has become difficult.

My own local club (not where I played Mike) have never really favoured Dystopian Wars - this was where I would play Infinity, Dropzone Commander and the gamesof Knight Models, so my attention turned to Dropzone Commander in a big way - as you might have noticed!

UNTIL THIS WEEKEND! Just when I thought I was out, they pull me back in...
Frontline Despatches gives us a look at the state of the world and the game. Accompanied by an in-depth exploration of where the World War stands, it looks like Dystopian Wars has entered the End Times. The timeline has moved forward to 1875, and the world is a ruin.

Reading through what has become of the Great Nations and their allies is depressing stuff - in a good way. This truly is Dystopian Wars now, as five years of war have wrecked the environment and caused untold misery across the world. There is interesting exploration of the military developments - it seems that no longer will we be focused on untold numbers of grand ships each bigger than the last, but more effective and deadlier vessels - I imagine in a Battle Cruiser-style, bristling with advanced weaponry and veteran crews. Even the map will be changing, as the War has caused global warming and the rising of the sea levels!

A lot of this sounds completely feasible - I have recently finishing listening to the podcast by Dan Carlin Blueprint for Armageddon, laying out all the changes the First World War inflicted on Europe and the world beyond during the years of the war. It makes complete sense that a fictional conflict of this scale would lead to massive changes in all aspects of life - widespread poverty and disease, the collapse of entire regimes and the massive restructuring of production. I am greatly in favour of developing the world and getting as much background material out there as possible.

The first new front will be Africa, where the Britannian and Prussian forces are seeking to exploit new resources and secure the untapped riches from their enemies.

So how soon are these wonderful things coming? Is this a bandaid to keep the Dystopian Wars players happy, or a new Renaissance for the Dystopian Wars? Some positivity will go a long way here - it is not my intention nor in my interest to waste time moaning about toy soldiers.

Rumours say something is coming in November, with greater releases in 2017.